I am working on a slider crank mechanism for moving an object of about 100 kg back and forth 30 mm at about 600 rpm.

I plan to attach the connecting rod onto a flywheel that act as a crank, or attach to a pulley (in case need to use a transmission system to reduce input speed, increase torque from a high power motor). With 30 mm stroke or crank length 15 mm, the pin for attaching the conrod onto the flywheel/pulley would be fairly close to the shaft of the flywheel/pulley. Due to that, the choices of diameter of both the pin and shaft would be fairly limited, both would be fairly small sized. For that, are there any calculations that are critical for determining the size of both the pin and the shaft? Or would it be fine to use a pin and shaft of any diameters as long as they can be attached to the flywheel 15mm apart? I have searched for relevant formulas but cant figure that out so far…

Beside the diameters and friction, mind to advise other factors critical to the functioning of the mechanism?

Pardon me if any lacks of physics knowledge demonstrated, I am no longer a student, did studied Physics back in old days...this is just something I am working on for my own.

I am willing to do some readings for relevant physics theories involved, would really appreciate any advice or references given. Thanks in advance. 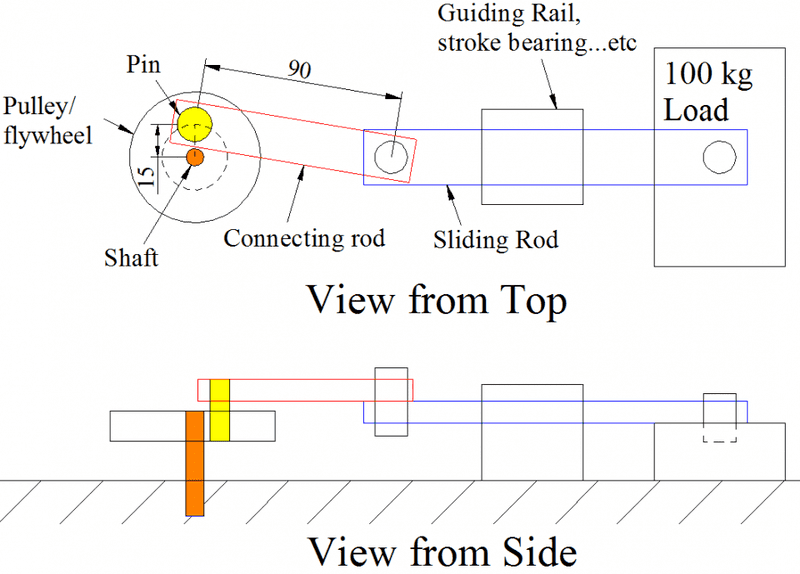 That's a very big load to shuttle back and forth 10 times a second .

First thing to do is to estimate magnitude of forces involved .

There is no practical difficulty in designing the actual mechanism - within sensible limits crank shaft and pin can be made any size needed .

Since the required stroke is very short compared to the likely size of the components an eccentric might be more practical than an actual crank pin .

Generally best to keep large forces acting in a straight line as far as possible - eliminate the doglegs shown in your sketch .

Try drawing out what you think might be a plausible design and post it here for us to look at .
Last edited: Jan 20, 2016
Rx7man

I agree completely that you're going to need BIG bearings if this thing is intended to last any amount of time, and also agree that an eccentric rather than a real 'crank' is what is going to provide you with the strength needed..

So from what you say, the rotation speed will be 10 cycles per second, it moves .030meters per revolution, and the average velocity over the course of a stroke is +- .3m/s

Unless you want to run BIG bearings, I'd seriously consider supporting the crank on both sides in addition to @Nidum 's suggestion of eliminating any doglegs in the connecting rod..
Since I'm incapable of doing finite element analysis and the like, I like to err on the side of caution and overbuild things..
Supported on only one side, I'd run about a 1.5" shaft, and the more the the load overhangs the bearing the bigger the shaft... Supported on both sides, a 1" shaft kept to under 6" or so between bearings should suffice...
The connecting rod is going to have to be rigid as well.. 3x2x.25" square tubing or the like.. If the design allows it, I'd extend the connecting rod as much as I can and pivot it approximately under the center of the load.

Also, how long is this device supposed to last? 1 hour? 10,000 hours? If it's intermittent use, you can probably get away with spherical rod ends, otherwise greaseable ball bearings would be mandatory.

Here's an image of how I'd build it... The blue and red parts are pillow block bearings, and with this design the shaft can be cut out of one piece of 2.5" round stock, the big pillow block will go right over the smaller shaft, Admittedly it's a massive bearing and bigger than the load requires, but going to a smaller one will mean you need to only be able to drive it from one side, or need a real 3 piece crank to be able to assemble it.

If this is just a short term test rig that doesn't need to last long, and you can afford a little less rotation speed in exchange for a little more stroke, look at a dead 60cc chainsaw engine, it has about a 34-36mm stroke, the crank typically runs on 6202 bearings, has a connecting rod of about 70mm and has roller bearings.. I think the forces involved are seriously pushing the limits of what that design can handle, but it's what I can think of off the top of my head.

Lastly, you better have this thing anchored down really well.. it's going to walk all over the place!
Share:
Share

R
How to calculate the torque of slider crank?