The Cyclic Model: Multidimenstional Membranes? Where do these come from?

The Cyclic Model: Multidimenstional Membranes??? Where do these come from?

I am intensely interested in Astrophysics and Cosmology as a 12 year old.

Wandering across this topic and reading some of the replies, it occurred to me, that NO ONE has yet mentioned the Cyclic Model of the Universe.

The Cyclic Model suggests that there are many Universes, which are ultimately the product of the collision of two multidimensional membranes, which I forget the total energy of. The following diagram reveals the cyclic model in simplicity: 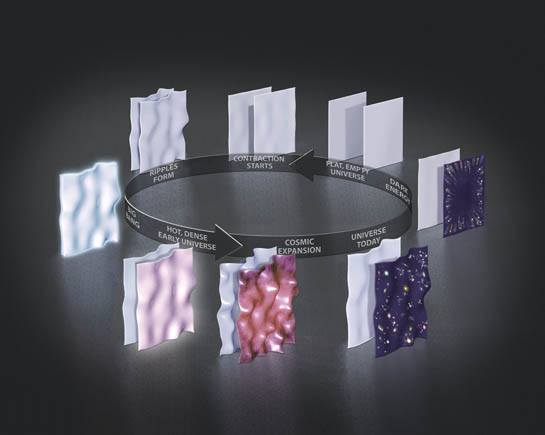 I came to know about this model when reading Astronomy magazine (astronomy.com). The Big Bang is a big explosion which we now consider plausible, so any skeptics to this should probably know that this is as insensible as a huge explosion giving rise to an ever expanding blob which we now call the Universe.

But again where on god's green Earth did these Membranes come from ???? (btw, I'm actually an atheist)

So the main questions: Where do these membranes originate from?

(By membranes I am referring to M-Branes from M- Theory)

Physgeek123 said:
The Big Bang is a big explosion which we now consider plausible, so any skeptics to this should probably know that this is as insensible as a huge explosion giving rise to an ever expanding blob which we now call the Universe.

First of all, be careful what you mean by the words big bang. 'Big Bang' is usually referring to the theory that (in general) says that the universe is expanding and was once in a very small, dense state. This theory has universal acceptance (among legitimate scientists), but does not actually say anything about the beginning of the universe. Despite its name, it does not actually refer to the universe beginning in an explosion.

Answering your actual question, I don't know for sure, but I did some digging around and this is what I found. First of all, branes are fundamental elements of matter that have been predicted by M-Theory. M-Theory is in its early developmental stages so the existence of branes (or strings for that matter) are still securely in the realm of theory. From the research I've done, I believe branes in the proposed cyclic model are independent from the branes of M-Theory described above.

Regarding the cyclic model, there seem to be several proposed theories. The theory you seem to be referring to (the one involving branes) posits that the universe exists on a multi-dimensional brane that periodically collides with another brane. First of all, this theory does not explain the origin of these branes, but most importantly this is a theory that the evidence does not support and has little following, so I wouldn't let it take root in your head too strongly.
Mark M

Vorde gave a great explanation, but I'd like to add a few things.

First of all, the big bang was not an explosion. It occurred everywhere at once, that's why the universe is isotropic and homogeneous. Read this to clear up any misconceptions about the big bang model:

Second, like Vorde said, the big bang model does not speak of any causes. It's more of an 'after the big bang' model, it gives an extremely detailed history of the universe from the Planck Epoch onward. The models name is the Lambda-Cold-Dark-Matter model, or LCDM for short.

The model you're speaking of is called the Ekpyrotic universe. It was founded by and is backed by Paul Steinhardt and Neil Turok. The picture you provided is a 2-dimensional analogue of how it works. The 3-branes would be separated by a 4th dimension in the bulk of space, so that they would collide at every point. The most popular theory that describes the expansion of the universe is inflation. Inflation is backed up by tremendous evidence, and accepted by most. The Ekpyrotic universe is an interesting idea, but that's all it is. An idea.

Finally, in non-perturbative string theory, called M-Theory, branes are the higher-dimensional analogue of strings. They essential function by 'holding' the ends of open strings, creating the string tension that determines string oscillations and hence, particle values. Branes can wrap around each other, and do a variety of things.

Remember, as Vorde said, this is not a well-supported idea. It's an interesting one, but I suggest you do some research on inflation.
Log in or register to reply now!

Related Threads on The Cyclic Model: Multidimenstional Membranes? Where do these come from?

Do cyclic models of the universe

Where does gravity come from?

Energy where does it come from?
7

Where order comes from

Where does dark energy come from

Where did the freidman equation come from?

Where does new space come from as the universe gets bigger?
8

Cyclic Model of the Universe