I am working on a project where I have to project a logo on a very narrow angle like shown below:

The projection distance will vary between 6-10 yards and at 10 yards the projected diameter will not be larger than 12inches so the beam angle needs to be less than 5 degrees. The idea is to have a very bright and focused light that can be seen in bright environments, is small and hand held. For example I have a $10 flashlight off ebay that uses a CREE XM-L LED and an aspheric lens that produces a very collimated light and can be seen in lighted environments: 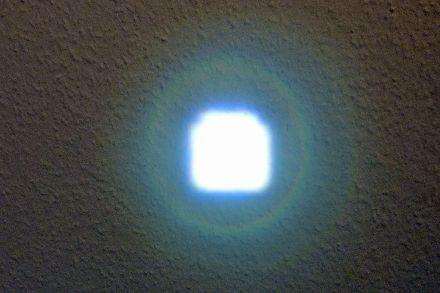 I could use a larger aspheric lense and narrow the projection angle down to 5 degrees but it will always project the shape of the LED emitter. I could de-dome the LED and place a glass gobo directly on top of the LED so as to project gobos with the LED shaped beam as the background. However LED measures only 5x5mm and I am not sure the glass gobo can have very fine details on such a small size.

I have seen somewhere else this schematic for gobo projection: 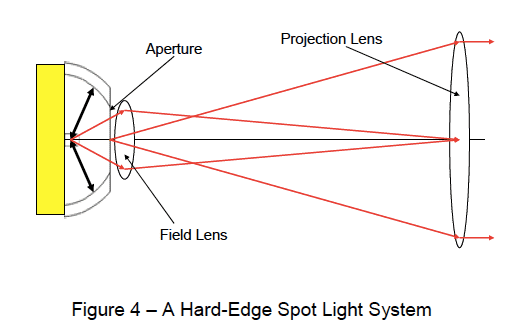 but I don't understand how it works. Supposedly you place the gobo with the image right at the aperture and before the field lens. I don't know what type of lens the field lens is (double convex, plano convex), what the focal distances of either lenses should be, and if this setup could even produce a very narrow beam?

I found some more things online, like this video on youtube, and this webpage showing how to convert a flashlight into a gobo projector albeit with a wide projection angle but I want to understand the physics and see if I can custom make something for my needs. Any advice on what lenses or setup could work for my project?

The lenses shown are bi-convex converging lenses. You can use any appropriate lenses so long as they have the converging property (incoming light converges on the optic axis).

You should be able to use a simple ray diagram to work out what would happen if the object were placed at the aperture.
It's unlikely you'd want to do that though. Your best bet is to rig something up and see what happens - then fiddle with the setup.
That's what educational projects are for.
nikosb

I agree with you but before I go ahead and buy any lens I want to understand how it works so that I can order the most appropriate lenses for the task. There are still some things I don't understand, the red arrow lines in the above picture indicate the focal lengths, if the lenses are bi-convex shouldn't the arrows for the field lens have the same focal distance left and right?

I worked a little bit more on the diagram and this what I came up with:

1. If light is converging after the objective lens how can I keep the beam angle really tight (less than 5 degrees)?

You want to start experimenting with cheap lenses since you have to buy the equipment yourself. Any magnifying glasses should be fine - just get different focal lengths.
(Are you sure you cannot borrow some from someplace?)

Notes:
An object at the focal length will have an image at infinity. But the logo in that position is not really an "object" since it is not a diffuse source: what you are doing is making a beam of light that has different colors in different places. By adjusting the objective-field spacing, you can fine tune how tight the resulting beam is - you'll probably want to use some sort of screw mounting.
Share:
Share

I Projector location in Cinema Theater

R
Projecting an image back into a slide projector

Image is inverted when I look into a projector lens -- Why?