What is Jerk and Jounce conceptually?

Can someone explain to me what jerk and jounce are in like real life? What are some examples of each and how do they work?


Jerk can be difficult to conceptualize when it is defined in terms of calculus. When a force (push or pull) is applied to an object, that object starts to move. As long as the force is applied, the object will continue to speed up. When described in these terms, we are oversimplifying slightly. We think along the lines that there is no force on the object, then suddenly there is a force on the object. We do not think about how long it takes to apply the force.
However, in truth, the application of force does not instantly happen. A change always happens over time. Jerk is the change in acceleration over time. Typically, the time of contact where a force is applied is a split second.
If you push on a wall, it takes a fraction of a second before you apply the full push. Your fingertips will squoosh slightly as you begin to push. How long the squooshing takes determines the jerk. If you push on a wall very slowly, you can actually feel your push increasing. In such a case, the jerk is very low, because the change in force is happening over a relatively long time of several seconds. Jerk happens when a force is applied and removed. But the whole time a force is acting consistently on an object, there is no jerk. (This is because the acceleration is constant when there is a constant force.)
How quickly the force starts its push or pull determines the yank and subsequently the jerk. In most applications, it is not important how quickly the force is applied, and thus we typically think of forces being applied instantaneously. A familiar example of jerk is the rate of application of brakes in an automobile. 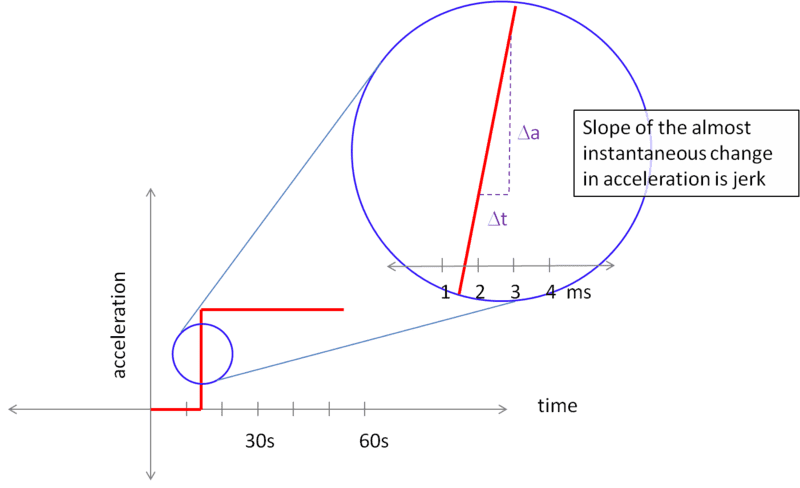 I don't know how you would explain Jounce other than by math.
Perhaps Jounce is the act of changing the application of the jerk? IE if you slowly start applying a force (small jerk) and then increase the rate at which you apply more force, getting a larger jerk, perhaps that itself is Jounce?

What if you integrated position? What happens then?
Simon Bridge
Science Advisor
Homework Helper

Integrating the position is finding the area under the position-time graph.
It has units of meter-seconds ... which do come up sometimes. It's called the "abasement".
https://www.physicsforums.com/showthread.php?t=185121

Take care: just because it makes sense mathematically does not mean it makes sense in physics.
Best to start with the physics and then get the math.
Drakkith
Staff Emeritus
Science Advisor

Heard another version of that joke in lectures, where the pattern went: jerk -> heel -> schmuck...
256bits
Gold Member

Railroad tracks and roads ( not always ) are designed to enter from a straight section into a curve with a transition called a clothoid where the radial acceleration eases from 0 to v^2/R, in which case R is a variable from the entrance into the curve to the value at the circular curve. Thus the change in acceleration radial a is not abrupt, which would be a discomfort for passengers and could throw the cars and engine off the track. What the designers are attempting to do is produce a gradual jerk and constant jounce, which gives a smooth increase in radial acceleration. ( Or is it zero jounce, constant jerk, and linear increase in radial accleration )

It is applied, or should be, for other transitions in curvature for machines, roller coasters in certain critical curve transitions, aircraft maneuvres most likely though I don`t know how it is applied in all cases but you don;t want to be in an aircraft enjoying your hor coffee and have it spill on you as the pilot banks a turn.

the last one has some interesting railway info
MikeGomez

It’s not possible to go from zero velocity to some other velocity without acceleration.

But getting from zero jerk to some other value of jerk is a change in jerk, or jounce.

Here is a list from my notes. Note that jounce and snap are the same. Don’t have the reference form where it came from, but wouldn’t be surprised if it came from Wiki (sorry).

And I suppose that change in "crackle" is "snap"?


(on the jounce wikipedia page) I really want to learn more about these lol.

What if you integrated position? What happens then?

The fact is that we can feel force directly. And force is proportional to acceleration. Other derivatives (include speed) are felt only indirectly.)
MikeGomez

HallsofIvy said:
And I suppose that change in "crackle" is "snap"?

Rate of change of "snap" is "crackle".


HallsofIvy said:
... force is proportional to acceleration. Other derivatives (include speed) are felt only indirectly.)

I don't get the point you are making.

Say we find ourselves in an elevator being pulled by a constant acceleration. If the bottom of our elevator is hit by a much faster object and we feel it, then we have felt the jerk (and perhaps other derivatives of position) directly.

Why do you want us to think of this as only indirectly?
cosmik debris

The higher derivatives of acceleration are used by mechanical engineers in the design of cam shafts. If you think about a normal combustion engine, it would like to maximise the area of the valve opening. At the top and bottom of the cam lobe the acceleration is changing direction very rapidly, this can lead to float and bounce of the valve.
thinkerdave

I think we can feel jerk and jounce clearly when we ride a Pirates' Ship (or Viking's ride) at an amusement park. Actually we feel jerk every day. Simply riding a car on a rough road generates change of acceleration as vibration. Your bad ride is caused by the jerk. But when you ride a Viking Ship at the park, you will feel the jounce. When the swing reaches the peak you will feel zero gravity and at the bottom you feel max cetrifugal force. The swings speed changes cause change of centrifugal force. The jerk is there but there is also change of jerk because at each location along the swing's path the feel of gravity changes. The combined effect you feel is the jouce. It is a unique feeling your body's control system very rarely experiences. And you get excitement. This may be the reason why my kid likes the swing !
bcrowell
Staff Emeritus
Science Advisor
Insights Author
Gold Member

Acceleration without jerk is just a static load, and therefore it can never cause vibration. E.g., in a machine shop, you can damage your mill or your work if the setup starts vibrating too hard. This can only happen because of jerk.
Share:
Share

Suggested for: What is Jerk and Jounce conceptually?

I What does jounce help us to do in physics?

I What is the difference between the resistance force and the friction coefficient?

I What is "frequency"?

I SO(3) -- What is the advantage of knowing something is in a group?

B What is Classical Physics?

I What is the real meaning of a pressure between 0 and 1 bar?

I Generating eddy currents, what is the best way?

I What is the speed of a shock wave?

B What is the difference between N = Q/nF and m = Z*I*t in electrolysis?

B What is the difference between "Unitless" and "Dimensionless"?