What is responsible for the structure of magnetic fields?

Both the gravitational and electric fields associated with matter are centered on the matter itself.

However, for a bar magnet, the magnetic field seems to be emanate from discrete loops, only part of which pass through the matter of the magnet.

What causes a magnetic field to have this particular structure?

Unfortunately this is not what I'm looking for - although the first video did provide an explanation for an apparent contradiction: explaining a magnetic field using relativity when the election are not moving at relativistic speeds. This explanation does raise further questions - would the magnetic effect be increased in the electrons moved much faster? I don't see a way to do this without the protons also moving faster by the same degree.

Given this relativity explanation, I would expect that the magnetic field effect would simply be homogeneous and continuous about the magnet (like a gravity field or an electric field), however this doesn't appear to be the case. From what I understand, charged nuclei hitting the earth's magnetic field spiral (if they are not going too fast) down the field lines towards the poles - this seems to suggest that the magnetic effect is around these lines.

If this were an interference effect of the electric fields of the individual protons and electrons, I'd expect a broader, banded structure - not discrete lines that splay out (as if pushing away from each other) from the ends of the magnet.
Meir Achuz
Science Advisor
Homework Helper
Gold Member

The magnetic field in a bar magnet is due to the aligned magnetic moments of the valence electrons in iron. It is not due to the movement of anything.
Merlin3189
Homework Helper
Gold Member

gladstone77 said:
I would expect that the magnetic field effect would simply be homogeneous and continuous about the magnet (like a gravity field or an electric field)

however this doesn't appear to be the case.

Only in pictures in text books.

From what I understand, charged nuclei hitting the earth's magnetic field spiral (if they are not going too fast) down the field lines towards the poles - this seems to suggest that the magnetic effect is around these lines.

They spiral down lines only because people draw lines down the centre of the spiral. They spiral in a field. The line you can draw along the 'centre' of their path simply shows the direction of the field in these places. You can draw an infinite number of lines, infinitely close together if you want. It does not matter where in the field the particle is, there is always a line running exactly along the 'centre ' of their path.

not discrete lines that splay out (as if pushing away from each other) from the ends of the magnet.

There are no actual lines. There is a field. The lines are simply an aid to thought. Same as with an electric field: you can draw electric field lines between charges, but they have no more reality than magnetic lines. You could do the same with a gravitational field and draw lines of gravitational force, if you wanted to.
gladstone77

Yet when iron filings are put on paper and a bar magnet put underneath, the iron filings coalesce along these lines - presumably that's why pictures of magnetic fields in books are shown this way!

This video shows the effect a magnet has upon a "magnetic fluid" - the result is a series of conical spikes:
If the magnetic field were homogeneous and continuous I wouldn't expect to see these spikes.
Merlin3189
Homework Helper
Gold Member

Yes they're quite an interesting phenomenon, which I've never looked into. I too wonder how one could calculate or predict the size and shapes of these strange patterns. But it's not lines of magnetic force.
You could probably alter these patterns by changing the composition of the ferrofluid - type of oil, detergents/surfactants, temperature, size of ferromagnetic particle - as well as changing the magnet.

I guess the basic explanation might be that a flat layer of ferrofluid is unstable. If there is a slight displacement of the surface, the field increases where there is more magnetic material and attracts more ferrofluid to that region, until the forces of gravity and surface tension limit it. Surrounding such a point would be a region of weaker field, allowing fluid to move away and enhance the field slightly further away, causing other peaks to form there, etc.
gladstone77

The arrangement of the spikes in the video looks very regular - I'd think that if this was due to small displacements of the surface, then the position and/or height of the spikes would be more variable. On the other hand, I can see the possibility that the attraction of more ferromagnetic particles to a specific region (starting to form a spike), would cause motion in the fluid, resulting in density changes and waves on the surface which could be affected by the field and become the seed for another spike to form (something like a form of crystallization perhaps).

However this doesn't seem explain the pattern of lines that iron filings form around bar magnet. If this pattern is not an outline of the magnetic field itself, then what causes this pattern to appear?
Merlin3189
Homework Helper
Gold Member

gladstone77 said:
... However this doesn't seem explain the pattern of lines that iron filings form around bar magnet. If this pattern is not an outline of the magnetic field itself, then what causes this pattern to appear?

I would say it does indicate the magnetic field. But the specific lines you see are just random examples, dependent on where the bits of iron landed.
A particle of iron is pulled towards a position where its longest axis aligns with the field and also maybe pulled from weaker field area to a stronger field area.
The iron particle also affects the field by concentrating flux in the iron. This makes the field stronger near the induced poles of the iron particle and so attracts other iron particles to it and affects their alignment.
The overall result is that the iron particles tend to aggregate in lines in the direction of the field at those points. But with a slightly different random distribution of iron particles to start with, you'd see a slightly different set of lines. There are infinitely many possibilities for patterns of lines - all showing similar alignment indicating the direction of the field. 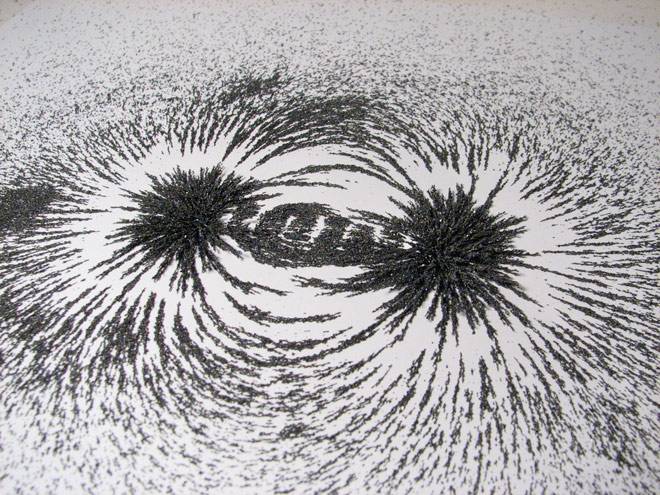 If you look at this pattern, you can see some odd things:
Lines have breaks. Lines cross. Lines are not supposed to do that. These are not the lines of the field, They are just where the filings have settled, influenced by the field.
Although there is a concentration of filings near the poles (but maybe not lines?) indicating the strong field and a concentration of lines,.there is then a gap with few filings, before the density increases again and finally, gradually falls away. That would suggest, a little away from the poles were very few lines and weak field, which still further away increases again.
What I think the gap shows, is that the strong field near the poles has pulled most of the filings out of that region.
Further out where the field is weaker, the attraction is not strong enough to overcome friction, so filings remain, but tend to align with the field and aggregate a little.
Even further out, where the field is yet weaker, it is not strong enough to cause aggregation or alignment so much and the pattern becomes more even and lines become indistinct..

Vibrate the surface and the pattern would change: lines would become more distinct and more continuous. But the underlying field has not changed. The iron patterns are merely indicative of the general field, not of any specific lines of force.

So the apparent pattern of lines are nothing more than an illusion! Your examples make this clear.

I believe you've answered my question. Thanks for your assistance.
anorlunda
Staff Emeritus
Insights Author

Related Threads on What is responsible for the structure of magnetic fields?

Are both velocity and jerk of charges responsible for magnetic fields?

S
What is fringing of electric and magnetic fields? What is the physics behind it?

P
What is the purpose of having a magnetic field?
2

The slopes of these graphs represent what? (Magnetic Fields)

What is a magnetic field made of

What is a magnetic field?

A
What is a magnetic field