Whats the best way to describe this system?

I have done problems similar to this one with 4 components but im getting stumped with this one.
The probability of failure for each components is next to the number 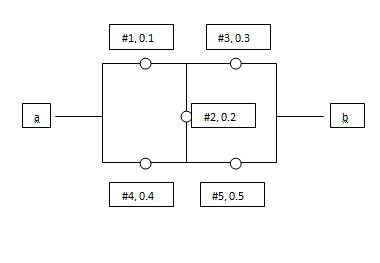 i basically need to find the probability that the system works..but the 5th component is confusing me
so far I have system fails= (A1UA4)UA2U(A3UA5), then you can just subtract 1 to get success

im wondering how to set up prob of success using intersections and unions.. and a method to find this so i dont have to post everytime i have a question :p

megr_ftw said:
so far I have system fails= (A1UA4)UA2U(A3UA5), then you can just subtract 1 to get success

so if thats true how would i calculate the probabilities?
CRGreathouse
Science Advisor
Homework Helper

so if thats true how would i calculate the probabilities?

This statement is true but won't let you compute probabilities.
SW VandeCarr

It's not clear to me what is required for the system to work. Is it supposed to be redundant? Will any operative path from a to b be sufficient for the system to work? It appears component two not redundant so it looks like two possible directed paths from a to b. Note the probability of system failure is the highest single component probability of failure on a critical path.
Last edited: Oct 10, 2010
megr_ftw

OK. Then path 1,3 has the lowest maximum single component failure rating with component three having P(F)=.03. If component one fails, that's still within the 3% failure expectation. It doesn't matter if they both fail. So P(S)=0.97.

However, from your original equation, it looks like component 2 is not redundant. That's a more interesting problem. What would P(S) be in that case?
Last edited: Oct 10, 2010
megr_ftw

Yes, if component two can be bypassed. But we just don't give answers here. If you understand the problem, you should be able to compute P(S) if 2 can't be bypassed. It's not hard.
CRGreathouse
Science Advisor
Homework Helper

I gave the answer in post #2, except for the calculation which is just addition and multiplication.
SW VandeCarr

CRGreathouse said:
SW VandeCarr, you can't ignore the failure chances for parts other than those most likely to fail. In a simplified model where you need only component A or B to work, failing at rates of 3% and 5%, the overall failure rate is not 5% but 1 - .03 * .05 = 99.85%.

I gave the answer in post #2, except for the calculation which is just addition and multiplication.

The way I would run the system is to run the paths with highest probability of failure (4%, %5%) first until failure. Then the system switches to the path with the 3% failure rate. At any given point in time the expected failure rate is 3% and P(S)=97%. Your way would default to a higher fail rate and the average success rate is k1(1-.03)+k2(1-.05)/2. where ki are time weightings for the lower and higher fail rates. In my model, if we get to the 3% path, higher fail rate paths would be shut off at first failure so the overall fail rate cannot be greater than 3% unless of course this path also fails.

GR I don't see this as a joint probability problem unless you run all paths at once. Then the fail rate is as you say (.03)(.05), but this is not what happens if 3 fails. Then you simply have the line with the 5% fail rate. I'm thinking series rather parallel processing , so perhaps I misunderstood.
Last edited: Oct 10, 2010
megr_ftw

that makes a lot more sense now. now one hard question im trying to figure out from that is the probability that component 2 works if the system works. so does this mean you have to go through component 2?
SW VandeCarr

megr_ftw;2926883]that makes a lot more sense now. now one hard question im trying to figure out from that is the probability that component 2 works if the system works. so does this mean you have to go through component 2?

The system can work, the way you set up, if 2 fails. Only operative paths then are the 4,5 and the 1-3. I would run the 4,5 until failure with the 1-3 backup. That way you have no more than 3% expected failure. The paths through component 2 have maximum single component fail rates of 4% and 5%, so it's nice to have, but the system can function without them. To know if component 2 is working you have to shut down 4,6 and 1,3.

The the probability of success if you force the paths through component 2 would be what?

probability of success is .998 correct?

so if component 2 works if system works the prob. would increase right?
megr_ftw

well to get it straight i got .801 for probability of success...
SW VandeCarr

megr_ftw said:
well to get it straight i got .801 for probability of success...

How did you get that?
megr_ftw

well crap... i know there are only 4 paths it could take so using that notion i did that calculation
SW VandeCarr

megr_ftw said:
well crap... i know there are only 4 paths it could take so using that notion i did that calculation

Just write out the path component sequences such as 4,2,3.
megr_ftw

Hmm, I wonder, if the system was a ladder with 10 rungs (instead of 1), how would the failure probability be calculated?
megr_ftw

Related Threads on Whats the best way to describe this system?

How to calculate the best way to fill out this test?

What is the correct way of describing this change - mean or median?

Is There an Easier Way to Solve This?

S
How to describe these results?

J
Is this a vaild way to test a hypothesis?

R
Is this a good way to explain Skolem's Paradox?

S
Shooting competition. What is the best option?