Why are humans attracted to good looking mates?

It may not be the general case but this is what it seems from experience. But what's the reason? Do looks indicate health or any other desirable characteristics?

Because we possess a skill to evaluate and enjoy aesthetical subjects. This skill varies from person to person (e.g a tall handsome prince may have a bad looking wife or a beautiful princess may be deeply in love with an ugly hunchback).
phinds
Science Advisor
Insights Author
Gold Member
2019 Award

In humans, bodily symmetry, particularly exemplified by facial symmetry, is known to be a factor in mate selection, and the knowledge/assumption/whatever is that this is because it is taken as an indication of health and the likelihood to produce viable offspring.
Yashbhatt

phinds said:
In humans, bodily symmetry, particularly exemplified by facial symmetry, is known to be a factor in mate selection, and the knowledge/assumption/whatever is that this is because it is taken as an indication of health and the likelihood to produce viable offspring.

I din't get you. How is symmetry related to health?
phinds
Science Advisor
Insights Author
Gold Member
2019 Award

Yashbhatt said:
I din't get you. How is symmetry related to health?

Don't know. Just repeating what I have read in several places over the years (and these were things like Time magazine, not scientific journals). It sounds reasonable to me, however.
SteamKing
Staff Emeritus
Science Advisor
Homework Helper

Yashbhatt said:
I din't get you. How is symmetry related to health?

You don't think the guy or gal with one leg shorter than the other might have some other issues as well, like maybe some spinal problems?
Sure, short legs can be corrected, but still ...

That's not to say that someone who appears to be normal physically can't be crazier than a moonbat psychologically.
phinds
Science Advisor
Insights Author
Gold Member
2019 Award

SteamKing said:
That's not to say that someone who appears to be normal physically can't be crazier than a moonbat psychologically.

The biology underlying attraction is not well understood and you should keep in mind the cultural effect. It's not difficult to find examples of different societies (or even the same society at different times) with different standards of beauty, often quite different (small and not at all comprehensive example but compare the first Miss America in to the http://wallpaper.krishoonetwork.com/wp-content/uploads/2014/09/Nina-Davuluri-Img.jpg [Broken]). Point being that one should be very wary trying to find a biological/evolutionary explanation for something that varies so radically between individuals and cultures. Clearly the capacity for attraction is biological but how much of what we find attractive is learnt vs innate is a big question.
Last edited by a moderator: May 7, 2017
zoki85

Beauty means health. More chance offsprings will be healthy. That's one of the reasons I think.
Puhseechee

There's also this chicken-and-egg problem, because the very fact that your mate is attractive says a lot about the likelihood that your offspring will themselves manage to successfully acquire mates and produce their own offspring. So in a sense, their being attractive - whatever that means in one's cultural context - is enough of an evolutionary reason to be mated with, but of course the beginning of "attractiveness" as a feature of human beings needs explanation.

Despite the caution urged by some other posters in this thread, there are some near-universals in standards of attractiveness. Bodily symmetry is one of those already brought out, but facial "averageness" is a more general and well-demonstrated standard that might cover that. Some things that usually make a person less attractive in many cultural contexts are also often signals of poor health/reproductive capacity - wrinkles and other signs of aging, having an unhealthy body weight, pale or diseased-looking skin, sparse or dull hair, and so forth. It's very clear that cultural norms have an incredible shaping effect on our attractiveness standards - and indeed, being able to signal assimilation by conforming to those norms might also be a signal of social intelligence. But if anything about human nature suggests evolution, our standards of attraction do.
zoobyshoe

I was thinking about this a while back and came to the obvious conclusion that people must be slowly becoming more attractive as the millennia role by. Then, though, it occured to me that the opposite might well be true: what could actually be evolving is our capacity to be attracted. The more universal our taste, the more babies get made.

Consider some remote tribe. The guy that finds all the available women attractive is at an advantage over the guy that only desires the 'most attractive" individual woman. And his more universal taste is something that would likely get passed down to his more numerous offspring.

By this logic it could be possible that we are actually getting uglier and uglier, but not realizing it because we're more and more attracted to whatever's available.
Simon Bridge
Science Advisor
Homework Helper

See:
http://www.ted.com/talks/dan_dennett_cute_sexy_sweet_funny?language=en
... it may help to rephrase the question, otherwise you could equally ask why gorillas are attracted to such ugly mates.

When considering "fitness" in evolution - consider: fitness for what?
Fitness for survival? But of what?

It is the survival of the trait - if the trait is really good at getting perpetuated, then it will persist.
Consider: many organisms have evolved a short lifespan - is that detrimental to the organism?
Last edited: Oct 2, 2014
Ygggdrasil
Science Advisor
Insights Author
Gold Member
2019 Award

In the rest of the animal kingdom, the traits that increase the attractiveness of an individual to members of the opposite sex do not necessarily improve the fitness of the organism.

Due to their sometimes greatly exaggerated nature, secondary sexual characteristics can prove to be a hindrance to an animal, thereby lowering its chances of survival. For example, the large antlers of a moose are bulky and heavy and slow the creature's flight from predators; they also can become entangled in low-hanging tree branches and shrubs, and undoubtedly have led to the demise of many individuals. Bright colorations and showy ornamenations, such as those seen in many male birds, in addition to capturing the eyes of females, also attract the attention of predators. Some of these traits also represent energetically costly investments for the animals that bear them. Because traits held to be due to sexual selection often conflict with the survival fitness of the individual, the question then arises as to why, in nature, in which survival of the fittest is considered the rule of thumb, such apparent liabilities are allowed to persist.

Whether these traits that arise and are maintained by sexual selection also increase the fitness of the species is still a question without a clear answer (see the wikipedia link above for further discussion). However, the fact remains that not all evolutionary change is adaptive; some evolutionary changes occur simply through random chance (genetic drift), and sometimes these changes occur through sexual selection and are largely orthogonal to adaptation.
Medicol

And now I also know how an American woman prefers a hairless man,
http://en.wikipedia.org/wiki/Physical_attractiveness

Studies based in the United States, New Zealand, and China have shown that women rate men with no trunk (chest and abdominal) hair as most attractive, and that attractiveness ratings decline as hirsutism increases.[76][77] Another study, however, found that moderate amounts of trunk hair on men was most attractive, to the sample of British and Sri Lankan women.

There is much variation to which traits we as humans find attractive. I would propose that focusing on which traits we find universally unattractive would shed more light on the matter.
zoki85

I don't think this question is limited to only humans. This is just an amateur hypothesis but I suspect that in species where the female chooses the male, the male they choose is the one with the brighter plumage or who has won a mating ritual. In species where neither sex chooses its mate, but in which the male mates with any available female, for instance dogs, we don't see a significant difference in characteristics between males and females. In my opinion, human females being the more attractive sex indicates that males are predominantly the ones that choose their mate and that part of that choice is based on physical appearance. Could it be that the emergence of a criterion among a population for selecting a mate becomes self reinforcing and perpetuating?
David Carroll

Biased a little, skeptic2? Wouldn't about half the population differ with your statement that human females are the more attractive sex?:p
skeptic2

Perhaps, but why are female models used more often than male models to sell to both women and men?
enorbet

DavitosanX said:
There is much variation to which traits we as humans find attractive. I would propose that focusing on which traits we find universally unattractive would shed more light on the matter.

Actually an article from a few years ago in Scientific American found that an overall concept of beauty is nearly universal and disregards geography, culture, and so-called "race". This study was begun as an extension to the phenomenon that averaging creates beauty. IIRC someone in the early 20th Century was trying to come up with a picture of an average criminal (to prove some pet theory able to predict criminality) and was perplexed that by combining features and averaging the results always looked more appealing than any of the originals.

Perhaps more importantly, the beauty requirement is also apparently biased by gender. The primary attractors to men are youth and beauty while the attractors to women appear to vary with hormonal cycles and include intelligence, ambition and steadfastness (willingness and ability to invest long term in offspring) but the closer to ovulation reduce to a more visceral sense of power - perhaps a hormonal version of "beer goggles" :P
256bits
Gold Member

For women, there are 4 basic body type.
Which one is most attractive? Would that be the hour glass. But from the study only 8% have that body type. 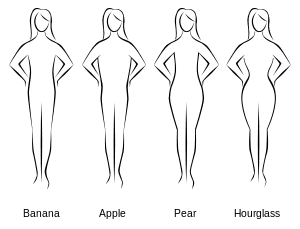 A study of the shapes of over 6,000 women, carried out by researchers at the https://www.physicsforums.com/wiki/North_Carolina_State_University [Broken] circa 2005, found that 46% were banana (rectangular), just over 20% pear, just under 14% apple, and 8% hourglass.[18] Another study has found "that the average woman's waistline had expanded by six inches since the 1950s" and that women in 2004 were taller and had bigger busts and hips than those of the 1950s

http://en.wikipedia.org/wiki/Female_body_shape
Unfortunately, the study does not state the age of the women.
Last edited by a moderator: May 7, 2017
Evo
Mentor

Wow, 46% are banana? I'm a banana. So why is women's clothing sized for hour glass? If pants fit at the waist, they look like clown pants because the hips and thighs have so much excess cloth, but I guess if you're fat, the hips and thighs are where you have extra girth, so the clothing is geared towards fat women?

Evo said:
so the clothing is geared towards fat women?

That's expected. Both men and women in USA are too fat.
Evo
Mentor

zoki85 said:
That's expected. Both men and women in USA are too fat.

Agreed. And the clothing industry here tends to cater to them. Finding pants with slim hips and thighs is almost impossible.
enorbet

Body types are of course important but since we tend to focus on faces (except for those men whose eyes can't seem to stay level) faces are a disproportionately weighted feature, and there, averageness rules. That said, a noted female comedian wondered why so many women said they focused on the eyes of men. To further the point, she went on to say, "I have eyes". :p
Log in or register to reply now!

Related Threads on Why are humans attracted to good looking mates?

Why are we (human) don't have mating season?

Are human actions part of evolution?
2

Why are insects attracted to feces?

Regarding human evolution and evolution in general