Why is my CPU not running at max published speed?

TL;DR Summary
How can I get my CPU to run at max turbo-boost speed?

I have a Intel(R) Xeon(R) E-2274G CPU @ 4.00GHz 4.01 GHz machine which has a published max speed of 5.0 GHz. However, when I run it under load on all 4 cores, it only gets up to about 4.5 GHz: Could someone explain to me why it's not ramping up to the full 5.0 GHz or what I could do to increase the speed without overclocking it? I have a practical reason for this: I wait a long time for my work to complete so would cut down the wait time if I could do something to increase the speed. 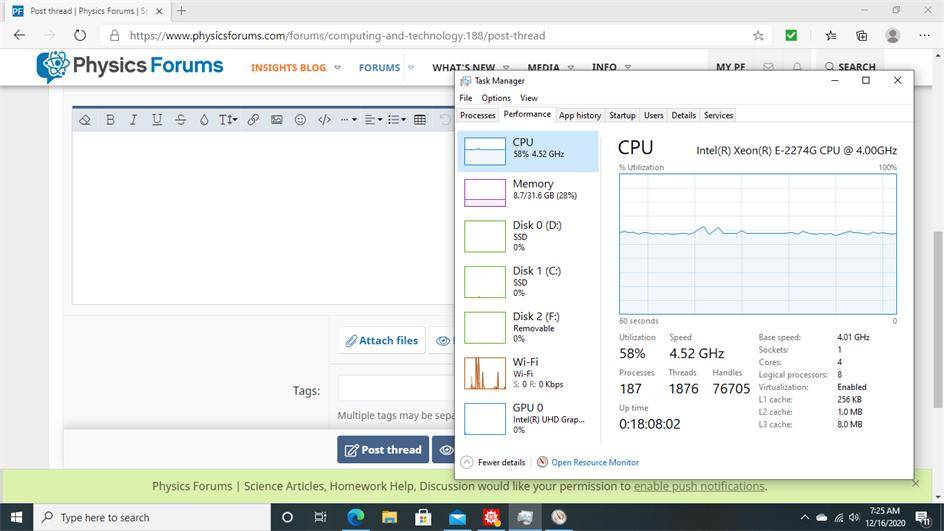 See the 4.00 GHz? Why do you expect 5 GHz?
phyzguy
Science Advisor

Modern CPUs are limited by power dissipation. The speed is throttled so they don't overheat. It may well be running at 5GHZ for short periods of time. The 4.52 GHZ you are seeing is probably an average speed.
aheight

Slight error. I meant 4.9 GHz: When I purchased it from hp.com, the quoted specs were:

just wondering why I can't get it up to this speed. I'm running Mathematica "ParallelTable" which is using all cores. Does the 4.9 figure apply when only one core is running or is the speed being reduced because of heat flow. If so under what conditions can I see the speed at the full published figure of 4.9 for an extended period rather then just a spike I was wondering?
aheight

phyzguy said:
Modern CPUs are limited by power dissipation. The speed is throttled so they don't overheat. It may well be running at 5GHZ for short periods of time. The 4.52 GHZ you are seeing is probably an average speed.

Ok, sorry, didn't see this before I posted above. Basically then it's just a heat problem? Little misleading to say 4.9 when, as I watch the task manager it never gets this high or may just spike to this. Disappointing I guess. Purchased it to reduce wait time, ramped up the CPU load a bit and here I am waiting just as long as before I got it.
jim mcnamara
Mentor

I do not know what you are doing, so I am assuming lots of floating point operations.

Unless you have profiling in place and are seeing a cause, asserting that clock speed is the primary driver of completion time -- may not fly.

Generally about 80% of performance issues are software (your program) related. For example, data locality issues with large arrays, or failure to use parallel processing options. After installing CUDA and NVDIA GeForce 960, then parallelizing I got a 70% speedup. Mostly on loops. Your options are not necessarily going to be anything I just mentioned.

Ulrich Drepper, when not playing curmudgeon, has a lot of good things to say. Yes, this is dated but all of the concepts are very insightful, IMO. And it shows that you need to understand your archectecture to make good decisions.

I have an Asus gaming laptop. When I put it in turbo mode, it also speeds up the fans so much that the fan background noise becomes a fan roar. It also monitors the temperatures and silently turns down the clock speed to limit max temperature.

I understand that other gaming systems have liquid cooling.

anorlunda said:
It's not trivial to just speed up the clock.

Maybe the RAM I purchased is the bottle-neck. I got 32 GB of DDR4 2666 NECC RAM which is believe is buffered. I think the 2666 means it's operates at 2.666 GHz? I just ran something that took 1 hour to finish at 4.5 GHz. Would unbuffered RAM have made a significant difference?
Vanadium 50
Staff Emeritus
Science Advisor
Education Advisor
2021 Award

Did you look up the chip on Intel's?

You are using 4 cores and keeping 2+ busy.
MikeeMiracle

On that Task Manager view right click and select "Change graph to > Logical processors." What is almost certainly happening is that you have 4 or more CPU's and your program is only designed to use one of them. If that is so you will see one CPU maxed while the others are not. That is a software programming issue, the software has to be programmed to use all the available cores.
aheight

Here is a screen shot of my Mathematica session. I'm basically running a 2000 length table of Newton Iterations to find roots of very high degree polynomials of high precision using Mathematica's built-in parallel-processer "ParallelTable". This launches 4 kernels. As the iterations of each table index is completely independent of the others, I can run them in parallel (4 at a time). As you can see at the left, Mathematica is using four kernels (cores) as each kernel is reporting the table index mod 25 and the Task Manager Resource Monitor showing 8 logical cores running at 111% of maximum I think. I don't understand if HP states the CPUs can reach 4.9, why the max I see on the usage is 4.5? I'm just saying that's 4 MHz difference which is significant I think. 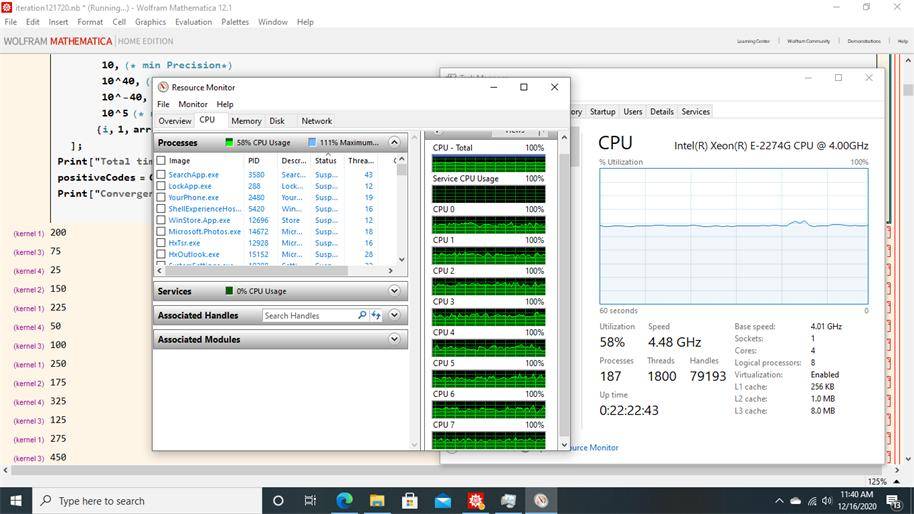 aheight said:
I don't understand if HP states the CPUs can reach 4.9

Read what Intel says. One core.

It is very rare for even a well optimised program to run at 100% CPU (except for a trivial program needing no data from memory and doing no I/O).

I once had to figure out how long a specific problem using a finite element code was going to run on an exoscale sytem. According to the code developers, less than 10% of the time to run was floating point operations.
Share:
Share

Suggested for: Why is my CPU not running at max published speed?

Landline Phone Q: Why is the phone line plugged into modem-not wall?

Speed of processors, does it have a max?

Recommendations on a CPU

Running CFD with python and bash: not in agreement

Emails/Forums Say My IP is X, Avast Says My IP is Y....How Possible?