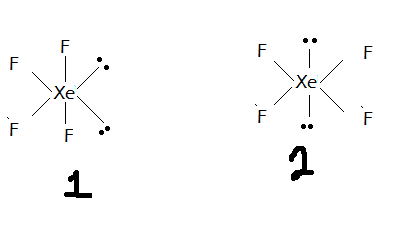 Ah. Thank you for pointing that out.
Basically, extent of repulsion:
LP-LP>BP-LP>BP>BP-BP
That's all I know regarding that.
mjc123
Science Advisor
Homework Helper

So why does it favour structure 2?
Arno Vigen
In all the periodic table, all models have tighter energy for subshell 5s two (2) electrons, which in my thesis (AVSC Nucleomagnetics Atomic Model) the p-subshell electrons settle at the nucleomagnetics axis of the nucleons, as arranged. That leaves electrons near the equator as better contributing 3D energy. This is the basis of all planar bonding structures (the two subshell-s fill the axial, and the excess fill equatorial position when in contributing atoms. So, when the Xenon (Xe) wants to bond, those two axial positions are the least likely. Others electron equatorial positions become the contributing electrons into a Flourine (or Oxygen).


That answers the first part of your question, why we don't get seesaw. The electron-electron repulsion and the easier bonding to the equatorial (further distance positions and thereby lower energy) versus the tight nucleomagnetics axial subshell-s, so the bonded Florines will always drift into a planar bonding position.


The interesting 3D nucleomagnetics calculation here is that for most electron subshell structures, the limit of planar is three (3). This planar-4 is quite unusual. Usually the equatorial at 120 degrees latitude separation (x3 = 360) works because the other atom is on the other side of the atom (120 latitude degrees away), but 90 degrees latitude separation (x4 = 360) normally falls off into structures on one side of the equator like 08-O Oxygen. The most direct evidence I usually present of the 3 equatorial 3D settling positions is a) the generally 1x, 2x, 3x ratio highest electrical conductivity in the Periodic Table in of 27-Co, 28, 29-Cu sequence (with highest always being the 3 position (#1 Cu, #2 Al, #3 Ag, #4 Au) and each period thereafter and b) the spectrum conversion within the middle of d-shell from a multitude of spectrum lines to just a few at that same conversion point 26-Fe > 27-Co in every period (due to 3D equatorial shading of interior subshells where d-subshell 1-6 are endcap, and do NOT provide interior subshell shading), and of course c) the change in bonding angles at that same transition points. It is a huge part of my thesis that the d-subshell has transitional 3D settling positions (based upon whether the atom is contributing or receiving). My hope is that transitional 3D structures (not a pure d-shell) resolves many of the anomalies that challenge the Chemistry world today.


Therefore, electrons take on transitional positions in building shells that include up to 3 electrons in an equatorial settling position, but only in transition elements. Yet, how does Xe get to four (4)? My calculations show that Xe because it has the 72 degree longitude of Shell-4d below provides an alternative 3D structure (only as contributing) which is not 2,6,10, but 2,6,6,+4! From axis to equator to axis, 1/3/5/5/3/1 as a fat sphere normally, but when contributing, given the forces from inner Shell-4, in 3D it can present at 1/3/3/4/3/3/1 where the 4 are equatorial 3D settling position. The release energies, density, and bonding observations all work mathematically.


In the AVSC Atomic Model each hemisphere normally when full would be 1+3+5 = 9 which is the quantized energy area in 2D above the inner shell. 1 dimension is hemispheres and other 2 dimensions build in circles/subshells. That shells are 2 hemispheres by interlaced circles (so 1-squared=1 x 2 = 2 for Shell-1, 2-square=4 x 2 hemi = 8 for Shell-2 & 3, 3-square=9 x 2 = 18, etc)) interlaced as you can fit more (2x by applying Biot-Savart) in the fat part of the nucleomagnetics field before the structure must change.
Share:
Share

Why isn't water a gas?

C
Why is sea water alkaline?
2

Why there isn't any unimolecular addition reaction?

Why isn't the ion NH4+ capable of hydrogen bonding?

Wetness and why materials change shape