I have had a discussion with some friends who is interesting in all sort of things of physics and experiments. We are interesting in energy research particulary, and looks for alternative energy sources that is "free of use", or at some degree an independent energy source.

However, we have been discussing back and forth wether it is possible to use an efficient heat engine to power the pump of a high COP heat pump.
I have compared this particular experiment with a water turbine that is harvesting the potential of the hight of a dam. The dam is continiously supplied with water from the river. The river itself is inefficient as power supply, so the dam is made to increase the level of water.
I think that the heat pump is doing something similar with the heat in the air. The pump has a cold and warm side when it is running, that is compared with the hight of a dam - one high and one low level which contains the potential energy in the water.

I would like to quote one of the people I'm discussing this with. He had (to me) a good point:

"Why wouldn't this work?

If, just for the sake of argument, or a place to start as an example, you have a very efficient heat engine that can convert 70% of the heat delivered to it into useful work output with 30% waste heat and a Heat Pump with a COP of 3 or higher.

That leaves 60% work output from the heat engine to be used for other purposes such as generating electricity.

If the heat engine is running directly from ambient heat, then the heat pump is not needed as a source of heat/energy to run the engine. All it has to do is remove the waste heat not converted into work by the engine.

If you had an engine only 40% efficient leaving 60% waste heat to be removed, you would still only need 20% of the work output to remove the waste heat and have 20% left over for the production of electricity.

Heat pumps can have a COP of much grater than 3. Some are as high as 10.

And please say something other than it violates the second law of thermodynamics."

Do the sceptics to free energy ASSUME this particular setup will not work, because it fights all common sense of what is understood as violation of physics?

However, we have been discussing back and forth wether it is possible to use an efficient heat engine to power the pump of a high COP heat pump.

Apart from an analysis of your specific setup (see above how this can be done), you can prove (using very basic assumptions about physics) that no setup of heat engines / pumps can ever do what you want: It would reduce entropy, and that cannot be reduced in closed systems.
sophiecentaur
Science Advisor
Gold Member
2020 Award

You must be adding the wrong quantities together in order to arrive at your conclusion.
You seem to want to improve the efficiency of a heat engine by increasing the temperature difference over which it operates. You want to achieve this by pumping heat to a higher temperature heat reservoir. But the mechanical energy work needed to do this heat pumping could be no less than the extra mechanical work got out of your 'more efficient' heat engine - operating over a bigger temperature difference.

Maximum thermodynamic efficiency (work out for a given amount of thermal energy transferred) all depends upon temperature difference. And the temperature difference from a heat pump imposes a minimum amount of work in. You can't just pick arbitrary percentage figures for efficiencies out of the air and then put those figures into a sum to prove anything at all.
Studiot

Let us start by replacing your dream figures with some realistic ones.

The maximum possible efficiency is (T1-T2)/T1 x100 in %
Where temperature, T is measured in degrees Kelvin.
You would be very lucky to find a real engine that can achieve half this.

So let us say your river water is at 15°C and you heat pump manages to raise some of it to 60°C, the standard temperature in a domestic hot water cylinder. Then you use this to run a heat engine.

So a real heat engine might manage half this or nearly 7% efficiency.

What effect do these figures have on your ideas?
Last edited: Jan 26, 2013
Dale
Mentor
Insights Author
2020 Award

Low-Q said:
If, just for the sake of argument, or a place to start as an example, you have a very efficient heat engine that can convert 70% of the heat delivered to it into useful work output with 30% waste heat and a Heat Pump with a COP of 3 or higher.

How do these figures change with a COP 10 heat pump?

Or does the COP strongly depend on the load - this case the heat engine? Edit I think you answered this in your previous post...

Is it any theoretical posibility to make this work if we have no real limits in COP? The Carnot efficiency is approx 70%. Using this efficiency, and use a neccesary high COP of the heat pump.

Thank you for wasting my time.

Low-Q said:
How do these figures change with a COP 10 heat pump?

An ideal COP 10 heat pump with a cold reservoir at 300 K could only raise heat to a hot reservoir of 333 K. An ideal heat engine with those same reservoirs could have a maximum effeciency of 10%.

The point is that there are 4 quantites of interest: the heat pump COP, the heat engine efficiency, the hot reservoir temperature, the cold reservoir temperature. Once you set any two of those then the other two are fixed. They are fixed in such a way that, all things being ideal, you can raise the same amount of heat you lowered.

Is that the arrangement?
sophiecentaur
Science Advisor
Gold Member
2020 Award

Studiot said:
Thank you for wasting my time.

Is that the arrangement?

I will make a drawing of this. I will post it later. However you are (about) on the right track but not fully there yet I guess.

Studiot said:
Thank you for wasting my time.

Sorry for wasting your time. Your earlier input is welcome. Send me a bill if I ruined your day:-D

If our teachers at school would send us bills for wasting their days back then I think we would be out of money by now. :D
Dale
Mentor
Insights Author
2020 Award

DaleSpam said:
you want to connect the heat engine to the hot, the heat pump to the cold, and both to an artificial shared reservoir which would be colder than the cold reservoir. Could the gain in efficiency for the heat engine compensate the work required for the pump.

You can show me your envisioned arrangement and I can re-do my analysis accordingly, but I expect that the result will remain the same.
Low-Q
Gold Member

Well, I was allowed to borrow an illustration from one of the members in another forum I am in.
Here is the illustration.: 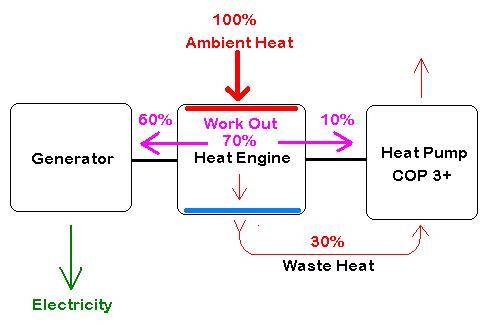 For the record, we are NOT discussing over unity. Just very curious hobbyists.

BTW, your equation for heat engine equation seems to allow 100% efficiency. I believed the absolute maximum theoretical efficiency was about 70%....

Low-Q said:
Here is the illustration.:

How do you figure that?
Low-Q
Gold Member

DaleSpam said:
In that image the heat pump and the heat engine share both the same hot reservoir and the same cold reservoir. Everything in my posts 5 and 8 applies, specifically the maximum possible COP is 1/0.7=1.43 so you would have to use all of the work from the ideal heat engine to power the ideal heat pump.

How do you figure that?

The heat pump will have at least the same temperature difference then, and therefore it cannot be "better" than the heat engine - for ideal engines and the same air temperature, they just cancel.

That is correct, a cold reservoir at absolute zero would allow 100% efficiency - as upper limit on the efficiency of real machines. An upper limit of 100% is trivial, but not problematic.
Dale
Mentor
Insights Author
2020 Award

Low-Q said:
With independent I ment that the hot side of the pump and engine is both in free air.

Yes, so free air is the hot reservoir for both. All of my comments in 5 and 8 apply. You have to use all of the work from the ideal heat engine to run the ideal heat pump.
Low-Q
Gold Member

Low-Q said:
I thought that COP was describing the relationship between input work and output heat of a heat pump.

Yes. Using my notation above [itex]COP_{heating}=Q_{HP}/W_P[/itex] for a heat pump in heating mode.


Low-Q said:
Say you have a heat pump with COP of 10, is it so that this heat pump suddenly drop its COP to 1.43 as soon as it is connected to a heat engine with 70% efficiency?


Low-Q said:
And, does it increase COP to 20 as soon as it is connected to a heat engine with 5% efficiency?

If you had a hot reservoir at 316 K and a cold reservoir at 300 K then an ideal heat engine would be 5% efficient and an ideal heat pump would have a COP of 20. Again, it isn't because you connected the heat engine to a heat pump, it is because you connected them both to the same two reservoirs, this time a pair of reservoirs that is efficient for pumps but inefficient for engines.
Last edited: Jan 27, 2013
Tom Booth

DaleSpam said:
...All heat engines and all heat pumps have a hot reservoir and a cold reservoir, that is part of the definition of heat engines and pumps. If you are not connecting the engine and the pump to the same pair of reservoirs then I am not sure what you are doing and why.

I have a stupid question.

Is this statement really true ? : "...all heat pumps have a hot reservoir and a cold reservoir."

I mean, usually a heat pump takes heat from a cold space like outside (cold reservoir) and moves the heat into a warm space like inside to heat your home (hot reservoir). But...

That is just an application.

What I mean is,... A refrigerator is a heat pump also right? Different application but fundamentally the exact same machine.

The refrigerator is sitting in the house at room temperature. It isn't working between two reservoirs, is it ?
Low-Q
Gold Member

I also have a stupid question. One thing is COP and efficiency. Another thing is the actual output energy at that efficiency. Two heat engines with same efficiency, operating at the same temperatures, can deliver different mechanical energy - that is dependent on the engines sizes. Two COP 3 heat pumps can deliver different amount of heat with different sizes. Or what? It will probably not change anything ...
Dale
Mentor
Insights Author
2020 Award

Tom Booth said:
What I mean is,... A refrigerator is a heat pump also right? Different application but fundamentally the exact same machine.

The refrigerator is sitting in the house at room temperature. It isn't working between two reservoirs, is it ?

What if I don't plug my refrigerator in ? Where are the hot and cold reservoirs then ?
Share:
Share

Related Threads on Assumed violation of physics - Heat vs. Work

Quantization and heat vs work

C
Work vs. work (or physics vs. biology)

B
Heat vs expansion physics

E
B Heat vs agitation

A discussion of heat vs cold
3

A
Energy vs force vs work vs power

B Violation of conservation of energy?