Fitting a thermocouple to a motor

I work in a manufacturing plant where a hydraulic pump motor has failed. The cause was bearing failure and the motor locked up. The motor still insulation tested ok, but is being sent out for rewind and new bearings I am looking at ways to predict early failure?

I want to fit a thermocouple to the motor so I can record the temperature weekly. I already have k type cable and display. Where would be the best location for the thermocouple? Ideally I want it inside the terminal box and through to the windings. I am hoping that as the bearing starts to fail the entire motor temp will start to increase so measuring the temp here will be ok.

Will there be a danger of shorting the windings to earth if I don't install it correctly.

Can you put the TC directly on the bearing cap?
dlgoff
Science Advisor
Gold Member

Anywhere external to the windings; on the frame. All you are getting from the log is a trend. And that's all you really need to predict a failure, IMO.
CWatters
Science Advisor
Homework Helper
Gold Member

I think it's unlikely that a thermocouple on the winding will give you much warning of a bearing failure.

However Google found this which might be of interest..


Monitoring Bearing Condition
Machine bearings are generally monitored through vibration analysis, oil analysis and/or ultrasound techniques. Through these, it is possible to compare current data to historical data and accurately assess the life of the bearings. Temperature increase due to increased friction is not even considered as a symptom of bearing failure in many bearing analysis texts until Stage 3 bearing failure occurs.

If temperature is a reliable method of bearing life prediction, why is it ignored until after it's too late? The monitoring of temperatures with thermography has been considered unreliable because so many variables such as ambient temperature, speed, load and runtime all have a pronounced influence on bearing temperature. This article compares identical or near-identical bearings on the same shaft which cancels the effects of these variables because they are common to both bearings. The remaining temperature differences between the two bearings on a common shaft with the same load, can only be the result of friction, an indicator of bearing problems.

Perhaps subtle changes are hidden because there are so many variables that can potentially contribute to bearing temperature. In addition to friction, other factors that can contribute to temperature variation are load, speed, ambient environment temperature and runtime duration. If these conditions could be predicted and accounted for accurately, then increases in temperature would reliably indicate bearing problems.
.

So perhaps put thermocouples on two bearings and look for differences between them?
CWatters
Science Advisor
Homework Helper
Gold Member

On the other hand...
http://www.maintenancetechnology.com/2013/10/methods-for-monitoring-bearing-performance/


Monitoring bearing temperatures is crucial: As these components fail, they get hotter. Trending their temperatures over time will help identify the early stages of failure. The most common tools for doing this include thermocouples and resistance temperature detectors (RTDs)—both of which can be permanently mounted to locations on the bearing housing for continuous real-time monitoring.

Marky32 said:
Will there be a danger of shorting the windings to earth if I don't install it correctly.

Yes. We had a 3500 horsepower motor blow up during just such an experiment.

Vibration analysis is your most powerful bearing diagnostic. Fast Fourier Transform(FFT) tells you the frequencies present. It's applying high-tech to the old mechanic's stethoscope.
In 1974 a FFT analyzer ran on a PDP11 computer and with its signal conditioning equipment weighed a couple hundred pounds.
Small hand held FFT analyzers came about in late 1970's and seemed like something out of science fiction . Bentley Nevada was a pioneer but there are scores of companies in that business now so try a search. The early ones i knew of started around Knoxville Tennessee. 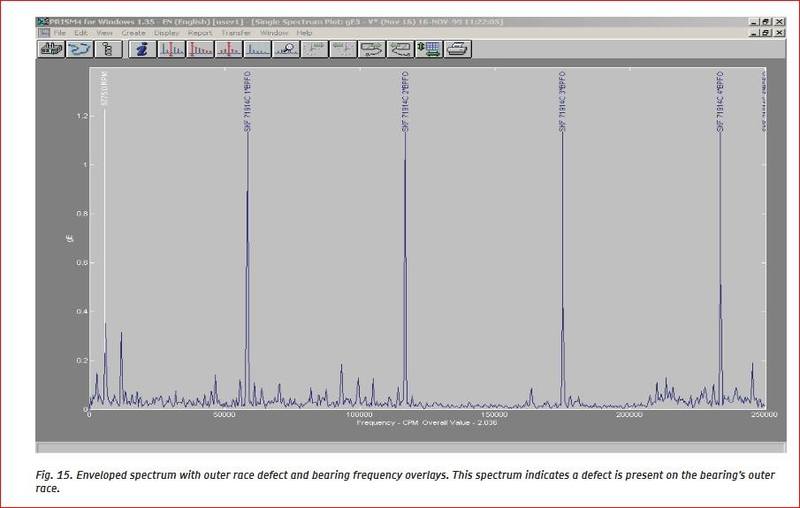 I saw my industry learn to use this technology in early 1980's. It's the way to go and is no longer expensive.

See if you can find a copy of Bentley's classic textbook "Practical Vibration Primer" .

Related Threads on Fitting a thermocouple to a motor

M
Calculating the resistance in a compensating circuit for a thermocouple

Thermocouple to measure the temperature of glass

M
Is it possible to convert a DC motor to a Stepper motor?

R
Need a motor to rotate