Gyroscope Precession - Cause? - From Feynman

I ran a search for gyroscopes looking for a definitive solution to the "What causes Precession?" and found no good clear answers. I think the Feynman lectures come close to the solution and followed that thought process, all the pieces point to the solution, I had to put my theory to the test on this forum. Please have some patience while reading this cause its long.
Feynman, From Lectures on Physics Volume 1 – “Rotation In Space”,talking about precession, quote “...When the wheel is precessing, the particles that are going around the wheel are not really moving in a plane because the wheel is precessing.....the particles which are crossing through the precession axis are moving in curved paths, and this requires application of a lateral force. This is supplied by our pushing on the axle, which then communicates the force to the rim through the spokes..... What about the particles that are going back on the other side...there must be a force in the opposite direction on that side. The net force we apply is zero.” The Visualization is given in first image from left attached below.

(This discussion is of precession of a bicyle wheel)

This quote was rather ambiguous and I resolved to see if 2D drawing of the precessing wheel did more justice. I drew it in Solidworks 2D drawing (Picture attached below –second from left below), and voila, a point precessing and also moving on the wheel does not move in a circle – but on a curve(each point(total 3) has it’s respective circle drawn – green, red, black – the black circle is the trace of the center of mass of the wheel, thus the point’s shadow lies on the center of mass at that point). To move along a circle an object needs centripetal force and a linear momentum (Without the linear momentum it isn’t going to move). But for a curve we need a centripetal force and a torque – the torque given by the coriolis force. When the wheel moves along the curve there must be a velocity, radial, moving the wheel element towards the center resulting in a coriolis force perpendicular to the radial velocity and being perpendicular provides the coriolis force a moment arm equal to the radius of the circle.

How does this result fit? In a demonstration of precession, we hold the string, spin up the wheel and release it. Nowhere do we give it the linear momentum it needs to go around the precession axis. The coriolis force provides just this torque, to push the wheel into the circular motion. While the centripetal force and its moment arm – the radius of the wheel (NOT THE PRECESSION RADIUS) - balances the torque due to gravity. Thus the torque due to gravity furnishes the centripetal force just as friction between car wheels and the road provide centripetal force to make a turn.

Now come the pitfalls,
This works really well for the top section. But reading the Feynman quote above –“ What about the particles that are going back on the other side...there must be a force in the opposite direction on that side. The net force we apply is zero.” So far we, think the torque due to gravity is a torque. But actually is a couple (the string tension and mg form a couple turning it clockwise ). So there must be a centripetal force 180 degrees to the one on the top. I can’t see it. I was hoping by placing this on the forum someone might figure it out.
If someone has a good apparatus, maybe you can do some rough calculations.

The coriolis force, the torque giving it linear momentum...fits too well to discard, I think i’m just not seeing it.

Then again I could be farting my *** off, twisting facts. So let me know, And thank you for reading this far. I could explain the coriolis force part in more detail if someone requires.

I'll try a quick explanation, without following your whole though process. Lets say you have a disc facing up and spinning clockwise. Imagine the face of a clock hovering over the disc. You exert torque and try to push the disk down at 3 o clock and up at 9 o clock. All the rotating particles on the left side acquire a speed component upwards from that force and all the particles on right acquire a speed component downwards. The most speed the have acquired when they reach 6 a clock and 12 o clock. The particles at 12 o clock move up and the ones at 6 o clock move down although you are pressing down on 3 an pulling up on 9.
Pradhan34

0xDEADBEEF said:
The most speed the have acquired when they reach 6 a clock and 12 o clock. .

This part i didn't get. The Most speed? if the disc is rotating clockwise with a angular velocity w. the velocity is constant for a particle rotating on the circumference of the circle. v=rw: r=radius=constant


0xDEADBEEF said:
The particles at 12 o clock move up and the ones at 6 o clock move down although you are pressing down on 3 an pulling up on 9.

Pradhan34 said:
This part i didn't get. The Most speed? if the disc is rotating clockwise with a angular velocity w. the velocity is constant for a particle rotating on the circumference of the circle. v=rw: r=radius=constant

But the disk is precessing, so there is an out of plane component for the speed that we are talking about.

No it won't. 6 o clock will move down and 12 o clock will move up. With vectors it is the same. The angular momentum vector points down, according to the right hand rule (fingers in direction of spin, thumb in direction of vector) The torque vector points from 6 o clock to 12 o clock (same rule). Hence by vector addition the tip of the angular momentum vector will be pushed towards the 12 and the spinning axis follows.
Cleonis
Gold Member

Pradhan34 said:
I ran a search for gyroscopes looking for a definitive solution to the "What causes Precession?"

I attach an image to illustrate the physics of gyroscopic precession. The image is from the http://www.cleonis.nl/physics/phys256/gyroscope_physics.php" [Broken] page on my website.

In order to have some reference I will have the gyroscope wheel spinning along a horizontal axis, just like in the well known demonstration of the spinning bicycle wheel. 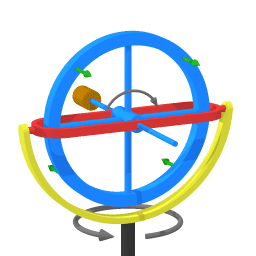 Summerizing:
If a gyroscope wheel is spinning fast (rolling) and some swivel is added, then the gyroscope wheel will tend to pitch.
(Also, note the counterpart: if the wheel is spinning, and some pitching motion is added, the wheel will respond with some swiveling motion.)
In the case of the well known suspended spinning bicycle wheel: note that its precessing motion gives rise to a tendency to pitch up. Gravity is tugging at the wheel, but the tendency to pitch up nullifies the gravitational influence.

The full story is in the http://www.cleonis.nl/physics/phys256/gyroscope_physics.php" [Broken] article on my website.

Suggested for: Gyroscope Precession - Cause? - From Feynman

Gyroscope precession - WHY? (What's the cause?)

I Steady precession of a gyroscope
2

Resistance and Precession Torque of a Gyroscope

I Precession of a gyroscope in freefall