How are square sound waves possible? How does a speaker sustain peak?

Hello everyone , after spending many hours watching youtube videos, reading wikipedia articles and other related material, I came to the conclusion that my best hope at understanding this is to have an explanation personally explained to me, and I trust this is the right place to ask for help. I've recently been playing around with sound synthesizers, and have since been puzzled by waveforms with jagged edges, such as square, rectangular, or sawtooth. I'll further address my question below, and I give my sincere thanks to anyone who responds.

What I know:
I'm aware that a sound wave does not literally travel through the air looking like a square, rectangle, sawtooth, or whatever the waveform is for that matter. Sound waves travel as longitudinal waves, and what is described as the 'waveform' is actually a function of the intensity of air pressure graphed against time. I am comfortable with the workings of a speaker, so when I say 'speaker' I'm only addressing the movement of the diaphragm.

Why I'm confused:
I'm confused because I don't understand how the maximum pressure of a sound wave can be instantly achieved, then sustained for a desired time, and then instantly dropped back to the original pressure. For any sound wave, wouldn't there always be a gradient leading up to the maximum, as well as a gradient when dropping back to the minimum? I thought maybe it's just very steep (<90 degrees) and therefore can appear as a square.

How would the diaphragm of a speaker sustain that top section of a square wave? I thought perhaps the diaphragm would have to be expanding outwards for the duration of the entire sustaining time.

I'm convinced that I'm over thinking this and will probably just embarrass myself, and for simplicity sake, I hope that's the case...

One attempt I made to explain these waveforms is that square/rectangular/sawtooth waves are a sinusoidal wave enveloped in such a shape, or multiple sinusoidal waves superimposed on each other. In which case the resulting wave wouldn't be perfectly shaped, unless some troughs/peaks cancelled each other out. But wouldn't this require more than one speaker to create the multiple sinusoidal waves that superimpose each other? Clearly it doesn't work this way, because an earphone with only one diaphragm can produce seemingly every sound imaginable.

It will mean so much to me if someone can give me a satisfactory response, I can't listen to music anymore with this thought on my mind XD.

Thanks again for taking the time to read! Very much appreciated. :thumbs:

It can't. You may input a square or triangular or sawtooth wave but the speaker is always going to be approximating that, so there will be some finite slope and some finite acceleration when the signal changes direction.
jtbell
Mentor

Square waves are a useful idealization that cannot be exactly achieved in practice. In physics, we make use of many idealizations like this: frictionless surfaces, massless strings, ideal gases, etc.
Zane_C

Thanks for the replies. As for this approximated wave, if you were to zoom right in on the approximation of a square wave, would it be composed of an enveloped sinusoidal wave(s), or will it be square-shaped for the most part (with the exception of the 2 rising and falling edges)?
AlephZero
Science Advisor
Homework Helper

The answer depends on the whole "system" you are discussing. A speaker is designed so the displacement of the speaker cone follows (as closely as possible) the voltage of the electrical signal sent to it. You can certainly generate electrical signals that are very close to "exact" square waves (e.g the rise and fall time is only a few nanoseconds, and the "top" of the wave is "flat" to within a tiny fraction of a percent).

The speaker cone wlll not follow that electrical square wave "exactly" because of its own mass (inertia) and the springiness of the speaker itself and the air it is pushing around. But that doesn't matter too much, so long as the most of the "error" is at frequencies that are too high for you to hear.

What happens to the sound wave in the air also depends on the complete system. For example, "in the ear" earphones (earbuds) have a good airtight seal between the phone and your ear, so if the phone moves suddenly to compress the trapped air and then stays in that position, the air stays compressed. On the other hand, a speaker in a room produces a "pulse" of air pressure as it moves, and that then decays away as it travels outwards, is reflected from the walls of the room, etc.

In principle it's possible to calculate how the pressure would change at any position in the room containing the speaker, and the changes would be different at every different position. But that doesn't really correspond to "what you hear". You have two ears, their sensitivity to sound is directional, they are not in the same position in space (and they move as you move your head, either consciously or subconsciously), your head and body affect the way the sound is transmitted through the air, sound can also be transmitted through your body and not directly through the air, etc, etc .....

Hearing doesn't work like a measuring instrument in a lab. You brain interprests the signals it receives from your ears. Your brain doesn't automatically "know" what a square wave is "supposed to sound like", but if you listen to something that you think is a square wave, your brain can learn to recognize it when you hear it again.

There is a lot of skill in getting a recording of a sound played back through a speaker system to sound "the same as the original". It's a combination of pure physics, psychoacoustics (i.e. the study of "how people hear", and practical experience. Just focusing on the physics is only one part of the complete explanation - and often a relatively small port.
Last edited: Sep 21, 2013
DrGreg
Science Advisor
Gold Member

The exact shape would depend on how the loudspeaker was designed, but one possibility is that it might look something like this: 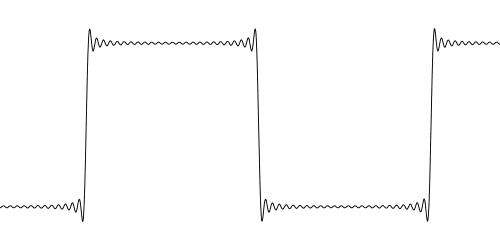 This helped a lot, thanks a lot AlephZero for the big response and DrGreg for the wave pic.
phinds
Science Advisor
Insights Author
Gold Member
2021 Award

A square wave is a composite of an infinite number of sine waves (see Fourier Analysis) and actual physical systems cannot reproduce the higher frequency components, which is why it ends up looking something like what DrGreg just drew.

If the system has a LOT of inertia, then it would be even more rounded.
Crazymechanic

nature just likes to be more linear square waves and other interesting synthesizer sounds are more the tings we like to make...
cjl
Science Advisor

AlephZero said:
The answer depends on the whole "system" you are discussing. A speaker is designed so the displacement of the speaker cone follows (as closely as possible) the voltage of the electrical signal sent to it. You can certainly generate electrical signals that are very close to "exact" square waves (e.g the rise and fall time is only a few nanoseconds, and the "top" of the wave is "flat" to within a tiny fraction of a percent).

The speaker cone wlll not follow that electrical square wave "exactly" because of its own mass (inertia) and the springiness of the speaker itself and the air it is pushing around. But that doesn't matter too much, so long as the most of the "error" is at frequencies that are too high for you to hear.

Actually, in general, the speaker cone will follow something a little closer to the integral of the waveform you send to it - if you send a square wave to the speaker, the ideal speaker displacement would look something like a triangle wave (although a real speaker would round off the points of the triangle wave, since it can't accelerate infinitely fast at the turnaround points). The air pressure produced by the speaker will follow the input electrical waveform fairly well, but the actual displacement of the speaker will look quite different.
voko

A shock wave can be pretty darn close to square.
cjl
Science Advisor

voko said:
A shock wave can be pretty darn close to square.

Suggested for: How are square sound waves possible? How does a speaker sustain peak?

I How does a large-angle pendulum oscillate?

Sound waves carrying mass and how to measure it

How does mixing paints work?

How does water flow from a faucet?

B Unable to understand how these two forces are equal

I A Question About Shock Waves From an Airplane
3

How does gravity convert potential energy to kinetic?

Sound intensity - How to deal with decibels?

Position of speaker in front of tube to produce stationary wave