How bright will Musk's Tesla car be in the sky?

I wonder if amateur astronomers will be able to see it.

He's sending it to Mars isn't he?

CWatters said:
He's sending it to Mars isn't he?

dunno, but it's currently doing lots of Earth orbits

yeah saw that a week ago on one of the facebook astro groups
couldn't believe people could be so stupid. Fortunately, it's only supposed to last ~ 9 months
stefan r
Science Advisor

Wikipedia says there are over 25 million asteroids larger than 100 meters in the belt. The car's effect on astronomy research will be too small to measure.

A mirror in low earth orbit is a lot brighter. Rocket lab's graffiti will be visible without a telescope. Similar to Jupiter or Venus but more flashy.

I have wondered about launching a can of sand or dust so that it re-enters at midnight on new years. You could get a nice collage of colors by using pure elements in each grain. Maybe try to scatter the contents at perigee so that the shower lasts a few minutes. Should only effect the targeted areas which are likely to have dense populations and will already have excessive light pollution. A lot of astronomers take the night off on new years eve anyway. Fireworks could be labeled as light pollution too.
Tom G

It's been spotted, but not by amateurs...
https://www.space.com/39647-spacex-tesla-roadster-spotted-in-space.html
stefan r
Science Advisor

Tom G said:
It's been spotted, but not by amateurs...
https://www.space.com/39647-spacex-tesla-roadster-spotted-in-space.html

What is the second object in that video?
rootone

swampwiz said:
I wonder if amateur astronomers will be able to see it.

I don't know.
Perhaps some of our resident astronomers know off the top of their heads how dim an object has to get before they have to go to time lapse.
I've heard objects of magnitude 6 are the dimmest visible with the unaided eye.

Here's the latest data from JPL on the brightness:

CWatters said:
He's sending it to Mars isn't he?

Apparently they got more boost from the third stage that then were expecting. Musk's original projected flight-path (see below) is wrong. 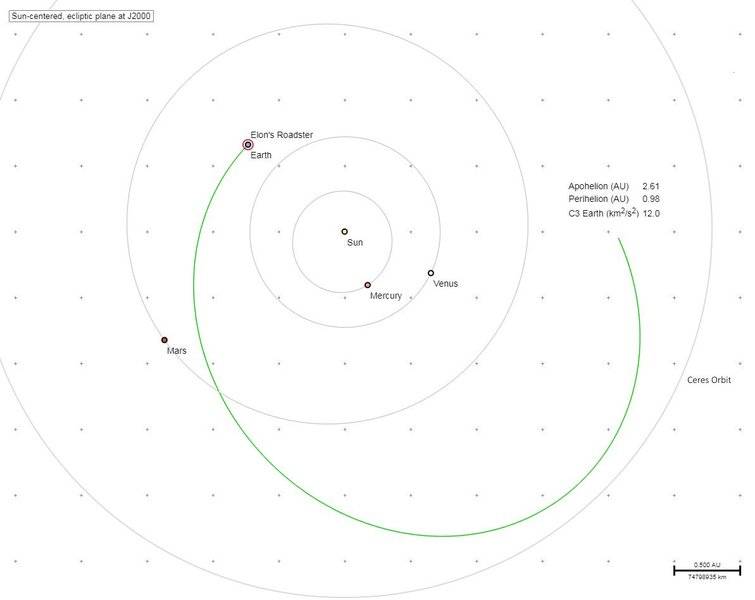 According to Andy Rivkin, at Johns Hopkins Applied Physics Laboratory, the payload reached a speed of 33.5 km/s after the last push, which he says is about 2.5% more speed than SpaceX would have needed to keep the vehicle from going no farther than the orbit of Mars.

So it would appear that the vehicle will make it past Mars (there is a very small possibility that it may impact the planet), but not quite to the asteroid belt.

According to JPL, a bunch of amateur astronomers, and Tony, aphelion was off by approximately a full AU. 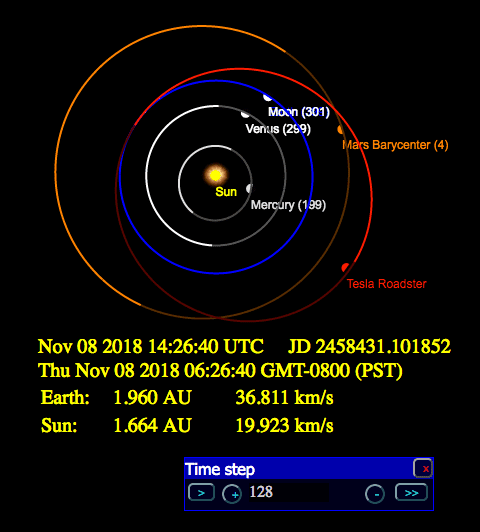 
|Glitch| said:
there is a very small possibility that it may impact the planet

From what I've researched, there is little probability of impact of earth or mars over the next 100 years, based on current data.

At least Elon Musk's Tesla is now way out there in a Sun orbit, and I think there was probably never much danger of it ending up in low Earth orbit. Even in the case of a catastrophic malfunction, the outcome would likely have been re-entry and a burn up quite soon after. For a whim, it seems almost quite responsibly managed compared to, say, Rocket Labs (New Zealand) "Humanity Star".

The real problem is that major communications companies assume they can launch hundreds of satellites, many no larger than a couple of paint cans, into sun-synchronous polar orbits, without some day having a another collision similar to Iridium LLC meeting Cosmos 2251. There have been others. Given even tiny debris at orbital speed can smash up a satellite into a hugely expanded cloud of deadly orbital debris, It would not take much more low Earth orbit space junk and collision detritus to make the scenario of a runaway avalanche domino-chain effect become a serious concern.

Like "throwing away" most other kinds of used up, broken, wrecked unwanteds, it seems the concept of "losing" stuff we no longer want, and even estimating the space we are happy to pollute with planned obsolescence kit is so large nobody need care, is something we humans are apparently OK with.

"Getting away with it" - like any thief or embezzeler is seemingly acceptable unless we are faced with some exponentially increasing threat to disrupt our economic endeavours!
OmCheeto
Gold Member

Elon Musk shared the following video on Twitter yesterday.
Not sure if it qualifies as an "amateur" telescope.
It looks like it belongs to some kind of astronomy "club". (I don't speak Italian)


Celado Astronomical Observatory MPC K51 (Italy)
0.8 meter telescope
19.3 mag (R)
2,500,000 km distance
2018.02.15.0341-0434 UT
Riccardo Furgoni & Giancarlo Favero​
ps. My mathematical analysis of converting "Apparent Magnitude" to "What size diameter telescope do you need to see it?" is still in progress.
I've learned much in the process.
The following was a welcome comment that I ran across:


BrooksObs; "I always find it mildly amusing to peruse these well meaning threads purporting to define the magnitude limits for various aperture instruments. The honest fact is that no formula and particularly none of the almost pointlessly complex ones being derived these days have serious and practical application for 99.9% of visual observers..."
[ref]​
It made me feel, not quite so stupid.
mfb
Mentor
Insights Author

A factor 10 in distance is 5 magnitude difference. By the time it will be 25 million km away (in about 2-3 months) it will be at magnitude 24.3, a bit brighter than Fenrir, a small moon of Saturn, as seen from Earth. An 8-meter telescope from the ground can watch it.

Another factor and we have 250 million km or 1.67 AU, of the order of the average distance. At this point we have to take into account that the solar intensity drops with distance. Assuming the car keeps its surface properties, a typical magnitude will be ~30, barely visible to Hubble, but reasonably possible with JWST. Ground-based telescopes will probably have too much background light.
Don't write a proposal for Hubble observation time yet: The car will come closer frequently.
OmCheeto
Gold Member

mfb said:
Ground-based telescopes will probably have too much background light.

I watched at a GIF yesterday of the car taken by a 0.43 meter telescope and decided that if they didn't know where to look, they would have never noticed it. 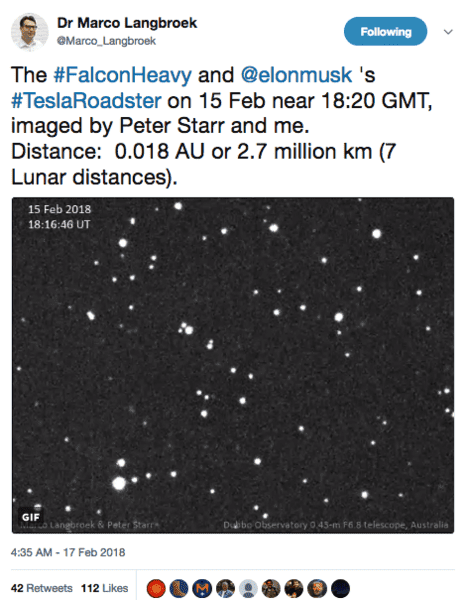 Without the motion, it is just noise.

OmCheeto said:
Without the motion, it is just noise.

That is generally true, and it is the reason the outer planets and various asteroids were discovered so late. It is easy to see them as objects, but realizing they are not stars needs a comparison of multiple observations, or at least an extensive star database to check every object - something that didn't exist for a long time.
Log in or register to reply now!

Related Threads on How bright will Musk's Tesla car be in the sky?

2 Bright things in the sky. Which 1 is Venus? And what's the other object?

Stargazing The curse of Elon Musk
3

How to map the sky?

How to identify that light in the sky

I Are almost all stars in the night sky brighter than the Sun?
2

How to find the position of a star in the sky

I How to find the position of a celestial object in the sky?

Is the solar brightness dependant on how many solarspots

Insights How Representative is the Night Sky? - Comments

Stargazing How many percent does the kepler telescope investigate of the sky?