Hi there! I'm having some trouble understanding Hubble's Law and Constant and would be grateful for some help.

So Hubble's Law shows that the most distant galaxies have the greatest red-shift, as they are moving away from us fastest. This shows that all galaxies are moving away from each other and therefore that the Universe is expanding. Would it be correct to say that the increased area of space to be stretched (ie expanding space) between us and the most distant galaxies results in their increased velocity from us?

Thanks very much in advance. Sorry that my questions are so basic!

Yeah.##V=HD## If you differantiate it respect to time find acceleration you get ##dV/dt=(dH/dt)D+H(dD/dt)##.If you assume hubble constant is not depend time then ##A=HV## this means speed is increasing then A will be increase.But If we assume H changes with time which tis is true.
Last edited: Jul 4, 2015
marcus
Science Advisor
Gold Member
Dearly Missed

No, Hubble's "constant" has been decreasing since the start of expansion and it is expected to continue decreasing but to level out in the long term.

The Hubble growth rate is an instantaneous fractional growth rate, like an interest rate on a savings account at the bank. Distance growth is proportional to size, at any given time in history distances are increasing by some fraction or percentage of their size per some small time increment Δt.

So Hubble growth rate is DECLINING but with time it has declined more and more gradually and is tending to level out at a positive rate. As the decline has become more gradual the growth of distances has tended to accelerate. So far it is not very dramatic. Here is a picture, in this graph the present is at 0.8 on the x axis. The time unit is a "zeit" = 17.3 billion years. The gold curve is the Hubble rate. The blue curve is the growth curve of a particular distance---curves for other distances would be proportional. They all have an inflection point at time 0.44. 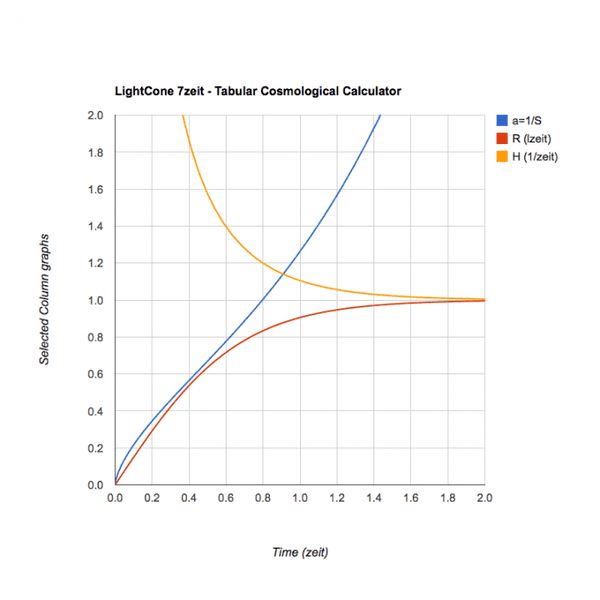 Thank you so much, marcus. I think I understand now. I'm not too sure about the graph (don't yet have the maths I guess), but I'll do some further research to understand it.

And in an accelerating universe, Hubble's 'constant' decreases at a more gradual rate than in a universe whose expansion is constant?

Sorry if this doesn't make any sense!

It makes sense to me. It sounds to me as if you understand.

In the picture the blue curve shows the way any given distance grows (like between two galaxies neither of which is moving relative to the space around them).
You can see by looking at the blue curve that there is no "acceleration" until around time 0.45 (actually the exact point is closer to 0.44 but it's hard to tell). At that point the curve changes from convex to concave upwards, the slope starts to steepen. this is "acceleration" of distance growth.

So we need to look at how steep the gold curve (which tracks the Hubble parameter, the distance growth rate) is decreasing.

The cosmological constant Λ is related to the long term growth rate H∞.

If Λ = 0 then H∞ = 0. So naturally we will see the H decline more steeply because it is going to zero.

But observations indicate that Λ is positive and more to the point H∞ is positive. so H is still declining as the gold curve shows, but it levels out at a positive level instead of going to zero. that is what makes acceleration in the blue curve kick in at a certain point.
Share:
Share

Hubble's law in a void

C
I Hubble's law and conservation of energy
4