Interesting optimization concept, to increase the size of the heat shield significantly to reduce the heat stresses during reentry... 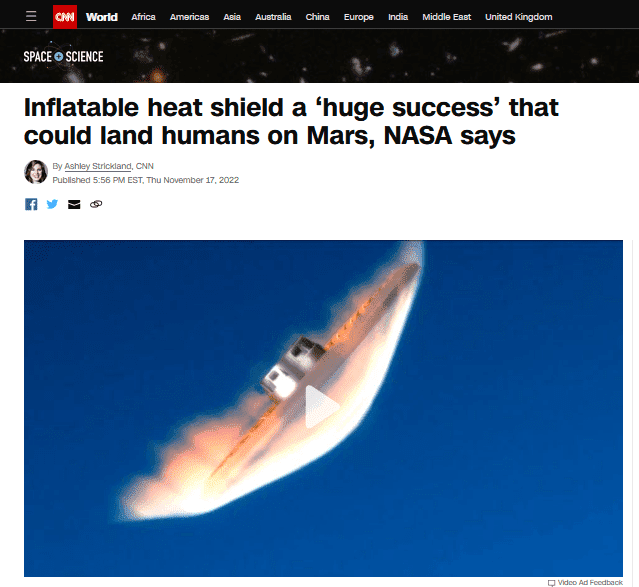 
When a large experimental heat shield inflated in space and faced the brutal reentry of Earth’s atmosphere last week, the aeroshell survived — and NASA officials have deemed it a “huge success.”

The technology demonstration could be the foundation of landing technology that puts humans on the surface of Mars.

The Low-Earth Orbit Flight Test of an Inflatable Decelerator technology demonstration, or LOFTID, hitched a November 10 ride to space as a secondary payload along with the Joint Polar Satellite System-2, a polar weather satellite.

After LOFTID separated from the polar satellite and inflated, the aeroshell reentered the atmosphere from low-Earth orbit.

Upon reentry, LOFTID faced temperatures that reached 3,000 degrees Fahrenheit (1,649 degrees Celsius) and hit speeds of nearly 18,000 miles per hour (28,968 kilometers per hour) — the ultimate test for the materials used to construct the inflatable structure, which includes a woven ceramic fabric called silicon carbide.

The heat shield and backup data recorder splashed down in the Pacific Ocean about two hours after launch, hundreds of miles off the coast of Hawaii, where a team on a boat was stationed to recover the items.

Preliminary data helped the team determine if the aeroshell was effective at slowing down and surviving the steep dive from low-Earth orbit to the ocean. The result: “a pretty resounding yes,” said Trudy Kortes, director of technology demonstrations at NASA’s Space Technology Mission Directorate. 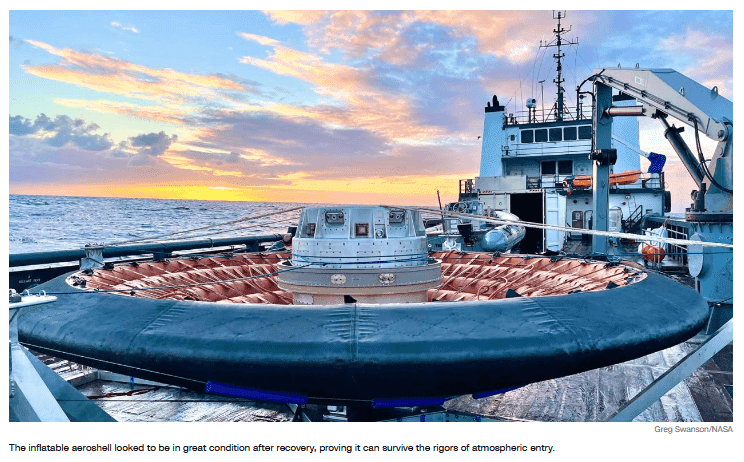