I'm self learning electronics and trying to wrap my head around its characteristics.

I was looking at this source.

Regarding the active and saturation region graph interpretation on that page, I would like to confirm if my thinking is correct. From that graph, it states that the ratio between i_c and i_b is inconsistent at V_ce < 0.7. Beyond the saturation region, the relationship between i_c and i_b is now constant. We call that beta (β). The breakdown region is when the voltage V_ce reaches (or goes beyond) the voltage V_cc.

From that link: "Suppose VBB and VCE are set to produce a current iB > 0 and VCE=0 V. Then both BE and BC junctions are forward biased. The saturation region corresponds to the case where both junctions are forward biased."
Under what condition would V_ce equal to 0V while in the saturated region besides when i_b = 0 and i_c = 0? Or is it just saying that the starting position of V_ce=0V and it is expected for i_b to increase?

I gathered that the cutoff region occurs beyond the midpoint of 0 volts and where V_ce=V_cc.

Another question: I was doing a few [URL="http://www.wisc-online.com/Objects/ViewObject.aspx?ID=SSE6104]practice problems[/URL] I found online on transistors where they say to assume that i_c = i_e (or at least, approximately equal). When I was doing those problems I initially made the mistake of calculating i_c by doing i_c = V_cc/R_c, thinking that i_c would equate to the current flowing from V_cc when in actuality, i_c = i_e. I learned that I had to find the current flowing through i_e to get a correct value for i_c. Why is this the case? I would have thought because the base acts as a switch by opening up contact between the collector and the emitter that the current from the emitter, i_e would equal to the current flowing to the collector, i_c based on using V_cc to calculate for i_c using ohm's law.


I also figured that at the linear region of an npn transistor, the emitter-base region goes from forward bias (sat region configuration) to reversed bias: V_Rc + V_c = V_cc. Also, V_Re + V_be = V_b where V_be = 0.7 V. Therefore the voltage drop from the start of the emitter to ground is equal to the voltage V_bb because of forward bias from the base to the emitter.

Note the red "load line" in this image from http://hyperphysics.phy-astr.gsu.edu/hbase/solids/trans2.html.

This link will explain how you use these "characteristic curves" to determine "load lines" for a particular transistor; with numerical examples.


Note that arrow on a BJT (on a emitter) symbol show how current will be flow through BJT. Of course from "+" to "-".

The BJT work very similarly to the tap water valve.
A water valve is always used as a device to control the flow of water. Similarly, always think of a bipolar transistor as a device used to control electric current flow by assistance of a base current.
If base current (Ib) flows hen BJT is ON so there must flow β times Ib current flow through collector. See this picture 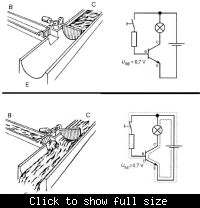 As you can see in first two examples BJT work in active region and Ic current is equal to:
Ic = β*Ib . But in the last example Ic = 100*5mA = 500mA don't holds anymore, do you know why? Because now we have Rc in the circuit so Ohm's and kirchoff's law must hold also. What is the max Ic that can flow in this circuit? We all knows the Ohms law, so Ic_max = Vcc/Rc ≈ 10mA . BJT tries to create a situation in which the collector current Ic = β*Ib = 500mA. So BTJ lowers his collector-emitter voltage to Vcs_sat voltage. The BJT in full ON. Transistor is in saturation region. In saturation Ic = β*Ib don't hold anymore. And in saturation the collector is equal to:
Ic_sat = (Vcc - Vce_sat)/Rc ≈ Vcc/Rc

Here you have a more detailed explanation about saturation region.

I think a reasonably simple yet useful description of the saturation process goes something like this:

Ideally this saturation voltage would be 0V and the collector-emitter junction would simply look like a short circuit allowing any current to flow as long as it doesn't go above β*Ib (since, at that point, the transistor will come out of saturation and start increasing Vce in order to hold the current to β*Ib).

In practice, real transistors have a saturation voltage that is greater than 0V, but it is generally only a few hundred millivolts.

Maybe I don't/didn't understand it... (I'll admit that I have trouble wording math concepts properly).

Yes we can say that.

Here you have this missing example

and compare it with this examples

And I hope that you can without any problem calculate all current and voltages in this circuit?

Saturation region of a transistor

M
Saturation region for the BJT