Rayleigh Scattering Conceptual Question about the Color of the Sky

Homework Statement:
Why when we look at the sun directly is it red/orange? and why does the sky appear blue?

Relevant Equations:
For Rayleigh Scattering we have the scattering cross section

Where ##\hat{r} = \hat{k}## (the scattered wave propagates radially). ##\hat{e}_0## is the unit vector of the incident electric field. For the sake of simplicity I'm going to assume normal incidence (see picture below) 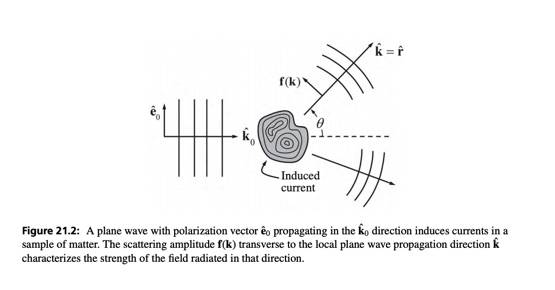 We know ##\lambda_{blue} < \lambda_{red}## so citing the formula above (in the relevant equations) it's apparent that blue light is scattered more than red light. But presumably this would hold for ##\theta = 0## as well but when we look at the sun head on we don't see blue, we see red/orange.

Am i interpreting this formula wrong?
Last edited by a moderator: May 31, 2020

What do you mean by inner part and outer part?
PhDeezNutz

vela said:
What do you mean by inner part and outer part?

It might be easier to think about the total cross section, ##\sigma = \int (d\sigma/d\Omega)\,d\Omega##. You can interpret ##\sigma_{\rm blue} > \sigma_{\rm red}## to mean that the air molecules are a "bigger" target than for red light. In other words, the probability of an interaction between the light and an air molecule is greater for blue light than for red light.

Now think of light along your line of sight coming from the Sun to your eyes. For simplicity, let's assume equal amounts of blue and red light are emitted by the Sun. If you were on the Moon, equal amounts of blue and red light would reach your eyes because there's nothing that gets in the way between you and the Sun. If you're on the Earth, however, the atmosphere is there. What's going to happen?
hutchphd
Science Advisor
Homework Helper
2022 Award

Not all the "forward" light is scattered. The stuff that is not scattered goes on through but diminished preferentially of its blue light. If you work it out, the total scattering of sunlight is about 10-5 per meter of air at sea level density. Depending on your interest you could calculate the total Rayleigh cross section (per atom) and figure what percentage of the sunlight is Rayleigh scattered. Of course the path gets longer as the sun sets but even at dusk it is only a fraction.
nrqed
Science Advisor
Homework Helper
Gold Member

A good follow up question is: why doesn't the sky appear purple.
JD_PM

nrqed said:
A good follow up question is: why doesn't the sky appear purple.

Based on the Rayleigh scattering cross-section formula

We indeed have ##\sigma_{violet} > \sigma_{blue}## so one would a priori expect to see the sky purple. The answer has to do with how we perceive violet
Share:
Share

Suggested for: Rayleigh Scattering Conceptual Question about the Color of the Sky

Question about the Microscopic Model of Current

Question about the conservation of mechanical energy

Understand a Conceptual question on Scattering

Question about flow rate in the source flow

Answer the question about time of cooling of a ball

Determine the net torque acting about the center of mass