E. coli is one of the best studied and most widely used bacteria in biotechnology. This week, published in the journal Cell, researchers report having engineered the bacterium to be able to generate all of its carbon from CO2, opening the way toward using these bacteria for replacement of petrochemicals in manufacturing.


So, Ron Milo, a synthetic biologist at the Weizmann Institute of Science in Rehovot, Israel, and his colleagues decided to see whether they could transform E. coli into an autotroph. To do so, they re-engineered two essential parts of the bacterium’s metabolism: how it gets energy and what source of carbon it uses to grow.

On the energy side, the researchers couldn’t give the bacterium the ability to carry out photosynthesis, because the process is too complex. Instead, they inserted the gene for an enzyme that enabled the microbe to eat formate, one of the simplest carbon-containing compounds, and one other strains of E. coli can’t eat. The microbes could then transform the formate into ATP, an energy-rich molecule that cells can use. That diet gave the microbe the energy it needed to use the second batch of three new enzymes it received—all of which enabled it to convert CO2 into sugars and other organic molecules. The researchers also deleted several enzymes the bacterium normally uses for metabolism, forcing it to depend on the new diet to grow.

Here is a diagram summarizing the metabolism of the engineered microbe: 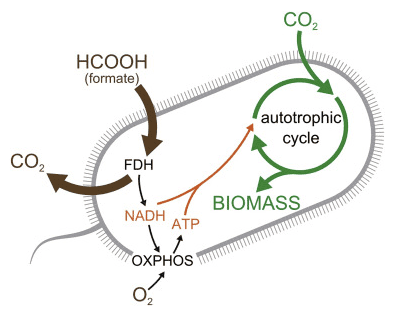 The scientists chose to use formate as the energy source for the bacteria because formate can be prodcued electrochemically from CO2. Therefore, when combined with a carbon-free source of electricity, the bacteria could be used to generate carbon-based compounds without net carbon emissions.

Previous work had generated bacteria which could incorporate a limited amount of CO2 into its biomass, but this work represents the first example where essentially all of the carbon in the bacteria comes from CO2. Generating the bacteria involved a clever combination of well thought out rational changes to the metabolism of the bacteria combined with directed evolution to introduce additional changes in the bacteria to actually get them to work as intended.

The living world is largely divided into autotrophs that convert CO2 into biomass and heterotrophs that consume organic compounds. In spite of widespread interest in renewable energy storage and more sustainable food production, the engineering of industrially relevant heterotrophic model organisms to use CO2 as their sole carbon source has so far remained an outstanding challenge. Here, we report the achievement of this transformation on laboratory timescales. We constructed and evolved Escherichia coli to produce all its biomass carbon from CO2. Reducing power and energy, but not carbon, are supplied via the one-carbon molecule formate, which can be produced electrochemically. Rubisco and phosphoribulokinase were co-expressed with formate dehydrogenase to enable CO2 fixation and reduction via the Calvin-Benson-Bassham cycle. Autotrophic growth was achieved following several months of continuous laboratory evolution in a chemostat under intensifying organic carbon limitation and confirmed via isotopic labeling.

Ygggdrasil said:
The scientists chose to use formate as the energy source for the bacteria because formate can be prodcued electrochemically from CO2. Therefore, when combined with a carbon-free source of electricity, the bacteria could be used to generate carbon-based compounds without net carbon emissions.

Hybrid electrochemical-biological carbon fixation cycle is very unlikely to be economical. More likely outcome is what elecetrochemical cycle will be improved to produce more useful products which can be used directly - i.e. formaldehyde in short term.
Dale
Mentor
Insights Author

I don’t think that this is intended to be a commercial product. It seems like more of a test bed for a new technology. In particular the microbes seem deliberately limited simply to prove that all of the biomass came from CO2. The idea of a tailored or designed metabolism is impressive.
jim mcnamara
Mentor

Shouldn't they use carbon dioxide monitors?

How far are we from producing artificial cells in the lab?