Some questions about absorption lines

I was watching the following video. I need your help to clarify few important points. Thanks a lot in advance!


Question 1:
I'm not able to understand picture #1 below. I think that the frequency increases vertically downward but what about the horizontal scale? Compared to picture #1, picture #2 is quite understandable. 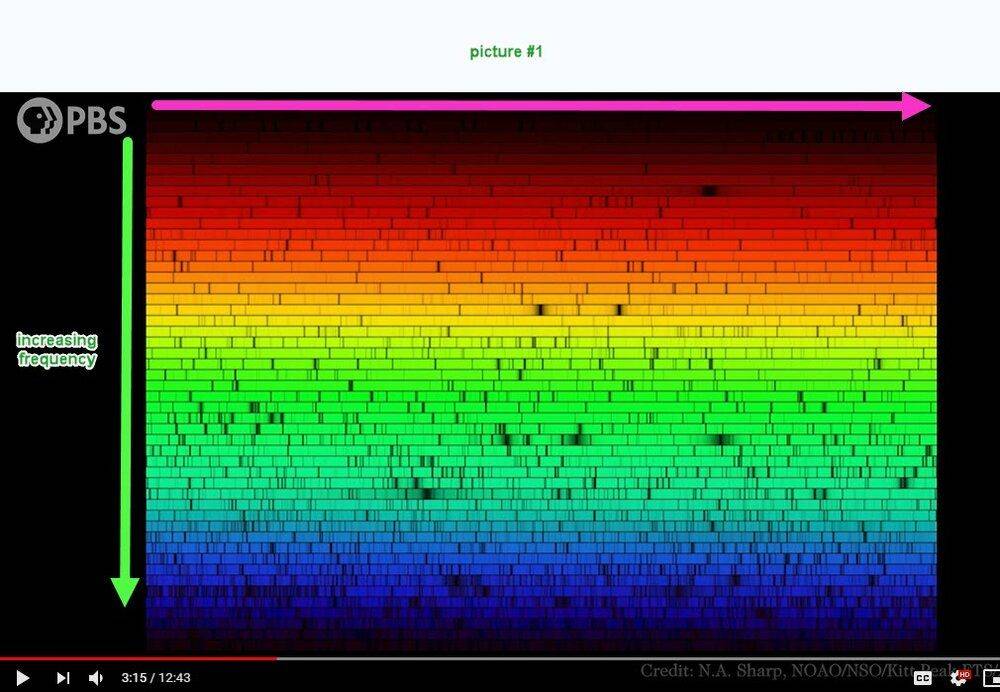 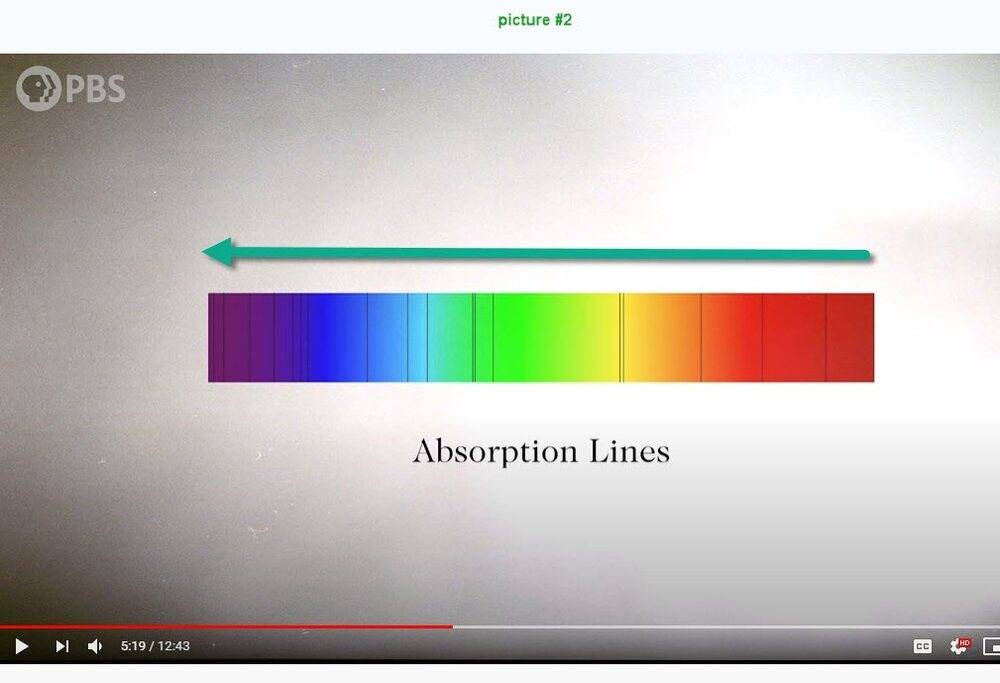 
By the time a photon reaches the photosphere it has a 50-50 chance of traveling the final 100km to space without bumping into anything. At least, that’s true for most of the light. But some photons encounter a new obstacle. As temperature drops, it becomes possible for some electrons to be captured by nuclei to form atoms. And if free electrons are good at stopping photons in their tracks, these atoms are even better. An atom can absorb a photon if doing so would cause one of its electrons to jump up to a higher energy level. The energy of the photon and the energy of the electron jump have to be exactly the same. So any photons trying to escape the Sun that happen to have one of these particular energies are going to get sucked up on its way out. And that’s what these dark lines are - we call them absorption lines. Each element on the periodic table produces a different set of lines corresponding to its unique energy levels. Just seeing which absorption lines are present tells you which elements are present inside the Sun.

But wouldn't those atoms re-emit the photons after some time to get back to their ground state?

Q1 the spectrum is cut up and stacked. Take the right hand edge of the strip below and attach it to the left hand edge to the one above and so on.

Q2 yes the is normally some signal in the dark bands.

Q3 Yes it remitted but in all directions and not all back to it's original trajectory.

Q4 yes different atomic and molecular processes absorb and emit outside the visible but a large number are in the visible and its the easiest region to study.

@PainterGuy, very nicely and clearly structured question, thumbs up for that :-)
I agree with the answers provided by andrew. Maybe just some complementary info:

Q1
The spectrum in the first image is very detailed, and single "row" representation would be too long. Therefore it is organized like a matrix, where next row is continuation of the previous row.

Q2
Correct, the intensity is not zero where you can see absorption lines. It just rapidly drops, comparing to neighboring wavelengths. A typical digitized spectrum look like this:
https://www.atnf.csiro.au/outreach//education/senior/astrophysics/images/spectra/sdssstellspec1.gif

Q3
The original photon absorbed by a stellar atmosphere or by nearby nebula is later emitted in random direction. Only small fraction of them would make it to the same original direction. The first image in the below link explains the situation with a star obscured by diffuse nebula for one observer. He/she observes an "absorption" spectrum. Different user seeing the nebula from different angle sees an "emission" spectrum, on the same wavelengths.
https://www.atnf.csiro.au/outreach/education/senior/astrophysics/spectra_astro_types.html

Q4
Right, see for example this spectrum spanning over broader region of wavelengths. The visual region corresponds to quite very narrow band only:
http://stars.astro.illinois.edu/sow/emspectrum.jpg
PainterGuy

Sorry for getting back to you a little late but I wanted to confirm if I understood your comment about Question 1 correctly.

If you describe the spectrum in frequency scale (Hz units), you are correct to start at lower rows and proceed to upper rows, but your arrows should be pointing from right to left for increasing frequency. The values for visible light are of hundreds of THz.

Far more common is to use wavelength to describe the spectrum, in nanometers or angstroms (10 Angstroms = 1 nm). Then you can "read this picture as a book", from top to bottom, from left to right. Top-left corner corresponds to about 380 nm, bottom-right corner to about 750 nm.
Share:
Share

Suggested for: Some questions about absorption lines

I Absorption lines and emission lines in stellar spectra

I Questions about the Voyager spacecraft

B Questions about Lagrange points in the Pluto / Charon system

I Question about Kuiper belt

B Question about a horizontal sundial