Tea, coffee and your favourite cups

So the autumn equinox and colder weather are here. In this time of year, people feel the need to warm up with hot drinks. What's your favourite one? Are you a tea or a coffee person? Or perhaps you prefer cocoa or hot chocolate?
Do you care about the specific brand and preparation method?
Have you got a favourite cup (mug) that you prefer over others?

I only drink coffee camping and at diners. On cold winter nights I enjoy a nice cup of tea.
Bystander
Science Advisor
Homework Helper
Gold Member

They all get broken.

Coffee, black, very strong, preferably in an aged mug from some dusty gathering on applied mathematics and ideally served with not one but two doughnuts.

Like the poster in #3, I am unfortunate enough to usually break such mugs before they reach a mature age. Hence my "like": It is out of sympathy, not because I enjoy you breaking your favorite mugs.
jtbell
Mentor 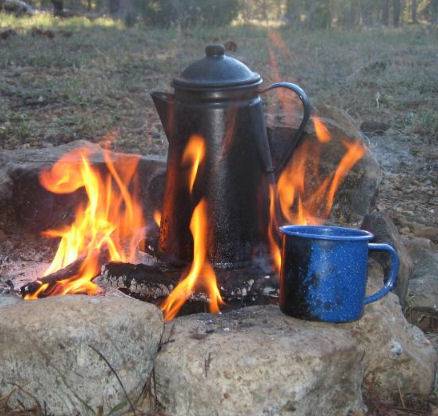 Sophia said:
Have you got a favourite cup (mug) that you prefer over others?

Yes! A few years back I got three beautiful hand made mugs at the swap meet for cheap. What is remarkable about them is that the potter made the walls extremely thin for a mug. Normally everyone goes the other way, and they're too clunky and heavy. The glaze is also very beautiful.

The sad part is that two are already broken. I'm afraid the last intact one will also get broken, so I don't use it anymore. Which kind of defeats the purpose. I wish I could locate the potter and see if he has any more, but all I have is an illegible name scrawled in clay on the bottom.
Evo
Mentor

I had a favorite coffee mug, it had a thermal image that only appeared when the mug got hot, it was a gift. We were moving and the packers were packing our things, I was upstairs and heard something shatter, I went downstairs, but saw nothing, no one said anything, I went over and lifted the trash bag, clink, clink, I reached in and pulled out pieces of my precious mug. That was the beginning of thousands of dollars in losses, which turned out to be caused by the unemployable idiot relative of one of the workers. The movers tried to "financially" compensate me for all of the things he destroyed. There are things that can't be compensated for.
Dr Transport
Science Advisor
Gold Member

Pike Place by Starbucks straight up, nothing cutting it.

Tea in the evening with a shot of whiskey in the winter when I am feeling rundown.

My favorite up matches the cup in the picture posted by jtbell......
OCR

I seldom go camping any more, but if I do go out and about I usually make tea... or coffee... simply using a billy.

Elwood: What kind of music do you usually have here?
Claire: Oh, we got both kinds. We got country *and* western.

Where are the torus jokes?
OCR

fresh_42 said:
Elwood: What kind of music do you usually have here?
Claire: Oh, we got both kinds. We got country *and* western.

Where are the torus jokes?

I started out as a tea drinker in high school or college. I think it was after I finished grad school and started teaching that I switched to coffee, probably because of the coffeemaker right outside my office in the departmental "lounge".

For me, coffee is either "regular" or "decaf". I freeze up whenever I see a chalkboard with two dozen varieties of coffee on it. I think I've actually had coffee at a Starbucks exactly once. We buy cheap coffee at Aldi, brew it in a generic drip coffeemaker in the morning, and reheat the cold leftover coffee in a microwave when we get home in the afternoon. On the road, we stop at the nearest gas station or McDonald's for a coffee break.

Here's a mug I picked up on one of those road trips: 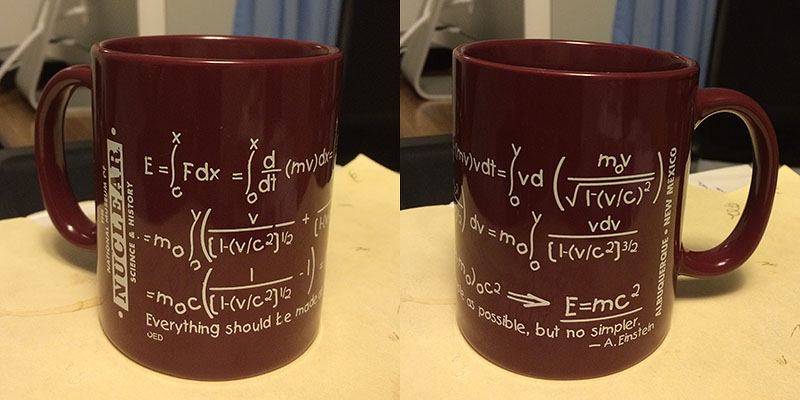 The word both automatically triggers this quote in me, although I would have linked Rawhide.

Thanks. It took me this link to realize @Krylov's two doughnuts joke in #4. I get old ...
OCR

fresh_42 said:
The word both automatically triggers this quote in me, although I would have linked Rawhide.

Yeah, that would have been better ...

fresh_42 said:
Thanks. It took me this link to realize @Krylov's two doughnuts joke in #4.

Hot chocolate. Even if I'm already melting from the atmospheric temperature.

*drinks* "But it's hot already Psinter"

It didn't register with me either, I just really like doughnuts. No need to worry about old age
wolram
Gold Member

I only drink hot lemon aid, there is to much caffeine in coffee and tea which is so bad for one. and i all ways use my PFs mug that is sacred to me.
PeroK
Science Advisor
Homework Helper
Insights Author
Gold Member

Regarding hot drinks, I've become a creature of habit:

Coffee in the mornings and after lunch; in the afternoons, Lady Grey tea; after my evening meal, Lapsang Souchong; and, before bed, soothing Camomile and Honey.
Sophia

Coffee in the mornings and after lunch; in the afternoons, Lady Grey tea; after my evening meal, Lapsang Souchong; and, before bed, soothing Camomile and Honey.

@jtbell where'd ya get that cup, it is wonderful.....
jtbell
Mentor

Dr Transport said:
where'd ya get that cup

It's a pretty interesting museum, too, if you haven't been there before.
Log in or register to reply now!

Related Threads on Tea, coffee and your favourite cups

What is your favourite coffee?
3

Your favourite quantum phycisists and why?
2

What are your favourite pets?

Who is Your Favourite Composer?

What is your favourite palindrome?
2

Your favourite quotes on math