Why does Efm shift in Mosfets

Hi,
I'm studying MOSFET and the book says that when N-channel mosfet has negative or positive gate voltage, the energy band diagram will shift. I don't understand why Efm shifts. 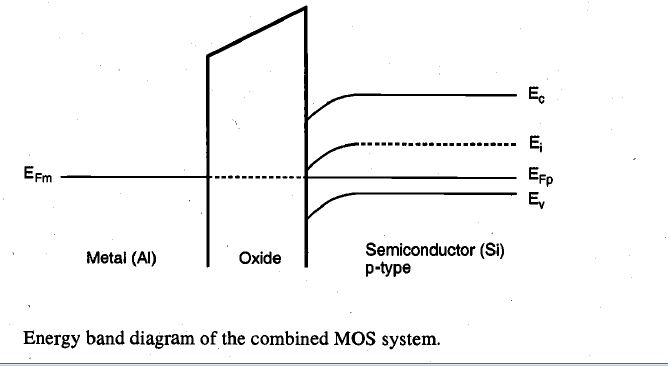 Now when Vg is negative the Efm shifts upwards, Why? And when later when Vf is positive the Efm also shifts again? I don't understand this. Shouldn't Efm and Efp be at same level?

The Fermi level (or electrochemical potential of the electrons) is only constant throughout a MOS device when thermal equilibrium is reached and no external bias is applied to the device..
jaus tail

Thanks for the reply. Shouldn't Efm and Efp be at same level. At junction of PN diode, we shift bands after aligning the Ef of both doped regions together.
Lord Jestocost
Gold Member

When thermal equilibrium is reached and when no external voltage is applied to the MOS structure, the Fermi level in the metal EFm and the Fermi level in the p-type semiconductor EFp are at the same height. Have a look at slide 8 and 9 in [PDF]Lecture #21 MOS Capacitor Structure - EECS: www-inst.eecs.berkeley
jaus tail

Thanks. This helped clear some things up. Just to be sure. Let's assume Vfb = 0 for now. initially mosfet fermi and Si fermi are at same level. 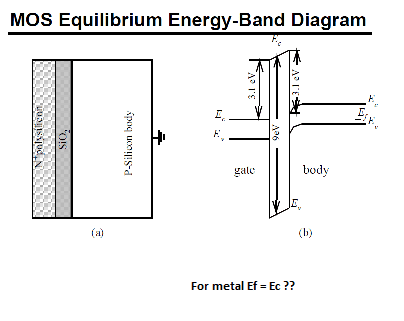 I got the above pic from the pdf link you gave.
Now if I apply positive Gate potential, then the positive terminal will attract electrons from Gate (metal). So the surface junction between Metal and Oxide will be devoid of electrons and so fermi level of metal will shift downwards.
Likewise the positive terminal will attract electrons from P-silicon body and fermi level of Semiconductor shifts up toward Ec at surface. Thus we bend Ec and Ev of Semiconductor so that Ec is closer to Ef at junction.

This pic helped a lot: 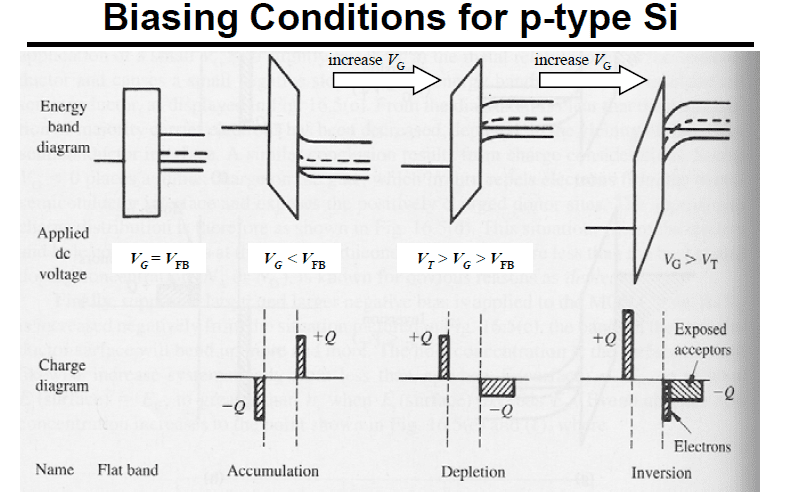 But I don't understand How Vfb helps. I assumed Vfb = 0 and was able to figure out how bands shift. But can you elaborate as to how Vfb comes in the picture?
When Vg is less than Vfb as in accumulation case, is Vg also less than zero? That would explain why negative Q accumulates at junction. Cause negative Vg repels electrons to junction.

From “Physics and Technology of Semiconductor Devices” by Andrew S. Grove:

Related Threads on Why does Efm shift in Mosfets

I Isotope shift in molecules

K
Why does superconductivity occur?

Why does regularity bring stability?

D
Why does platinum adsorb hydrogen

Why does superconductors don't radiate?
2

Why does the band gap exist?

C
Why does sodium have a doublet?

I Why does the magnetisation orient itself in the -y direction

Why does light go through glass