Any recommendations for a good cheap USB oscilloscope?

sophiecentaur said:
That would be helpful for me, definitely. I was wondering about washing machine and fridge motors. The startup of a fridge compressor involves quite a lot of instant current, I think.

It is not just a large load. A poor quality or malfunctioning switch that allows significant arcing while making or breaking the current can cause of some of the worst home-generated mains voltage spikes. Before they are extinguished, electric arcs are often unstable, leading to extra high dI/dt.

Edit: I see that @Windadct said almost the same thing at the same time.
NTL2009

Would the transients you are looking for show up on the secondary of a step-down isolation transformer? I haven't really had a chance to do much at all with this tool yet, and to be honest, I'm a bit hesitant to connect it directly to mains voltage. Just a little scary to do that with this while connected to a laptop (though the laptop could be on battery, but still...). The max input is 20V, and I only have 10x probes, so that's a little close to the 170V peaks from NA mains, and if the spikes went > 200, I might be risking it?

But I have some 12V isolated transformers, and I could play around with trying to trigger on transients through that if it would help. It would be a good learning session for me, so I can test out the triggering capability of this thing

Though I think one may really need some hardware for this. I could imagine a large spike occurring at say 30° that would not exceed the normal peak voltage. But would the high frequency component find its way into delicate electronics? Or maybe that's just an imaginary event, and/or if it occurred at 30°, it would also occasionally occur near 90° and exceed peak V? But I picture a phase-locked clean sine wave generator feeding a difference amplifier, so the delta between mains and a pure sine-wave could be observed.

Come to think of it, since this is 2-channel, I might be able to trigger on the difference between two channels. If I filter one, rather than try to phase lock a pure sine, I'd get some phase shift, so the triggering would need to be set a little looser for that, but maybe still useful? It would be super-cool if the built in function generator could be synced to the line... hmmm, I'm going to have to experiment I guess, now I'm curious.

edit/add: I just looked at the manual, and they show you can set a "mask" around the waveform, and trigger anytime the input goes outside the bounds of the masked area. Alas, that feature does not appear to be implemented on the Linux version of the software.
Last edited: Jan 10, 2018
Windadct

Yes - a mains:12V trans is a good place to start, set up the scope to "run" and set the trigger just above the waveform peak, then play with a local light switch, or plug in a heater or high wattage hairdryer, and turn it on and off, see if you can get the scope to trigger. Or play with the mask feature.

Do not connect the scope directly to to the mains.
NTL2009

Played a little using a 6V isolated secondary I had in my parts bin. Plugged a 60W filament bulb into the same power strip as the transformer, Switching it a bunch, I couldn't trigger the scope. Then tried a fan, and that would cause some glitches to show. And (if I can get these uploaded...), you can see some of those glitches that occur mostly within the peak +/- of the wave.

The last image is me just touching the probe to the wire briefly, you can see better how the pre-trigger works - it triggered @ 1V rising edge, but you see what happened before (from memory). The little diamond is the trigger point.

With trigger set to REPEAT, it shows the waveform that was triggered, it shows the date/time in lower right, and retains it until the next triggered event. So that would seem to work to catch an intermittent glitch. Not sure if these can be logged, and this is the Linux version which is beta (as is the Mac version) - the Windows version is more full featured. 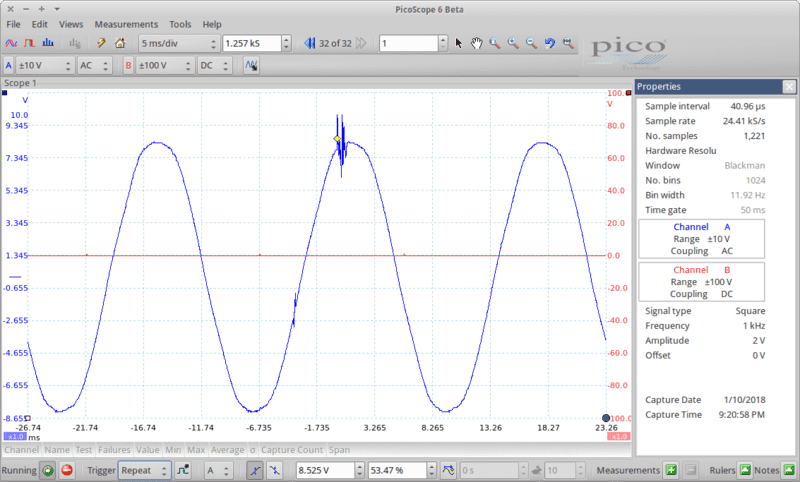 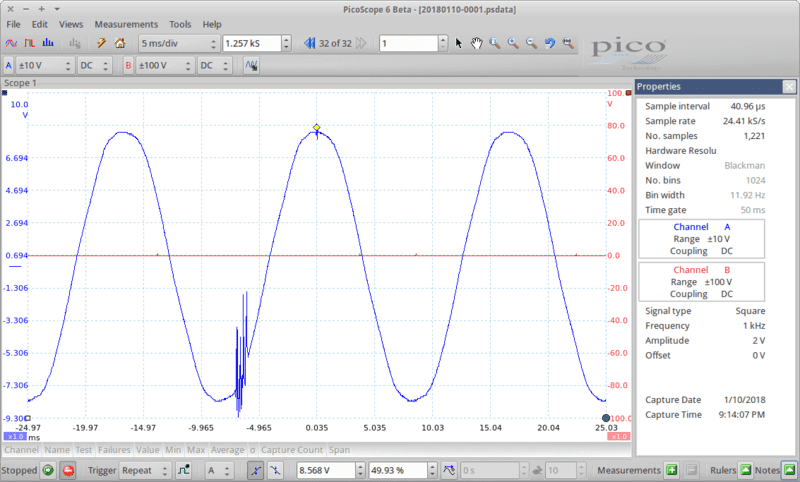 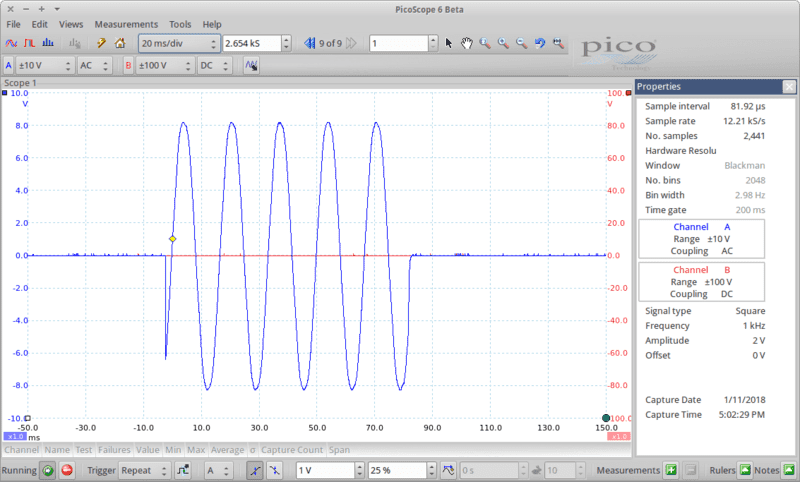 Be careful with those isolation transformers. If you unplug them at an unlucky point in the sinewave they'll make a transient that could be hard on your 'scope input... remove scope probe first.
that Amazon scope seem to have max input of 100 volts peak.

jim hardy said:
Be careful with those isolation transformers. If you unplug them at an unlucky point in the sinewave they'll make a transient that could be hard on your 'scope input... remove scope probe first.
that Amazon scope seem to have max input of 100 volts peak.

Good point. Thinking back, I don't think I unplugged or switched off the transformer while it was connected to the scope, I only switched the light or fan in the power strip.
Windadct

Well worth pointing out that Dave Jones on EEVBLOG -- has a lot of reviews and input on the whole scope issue... as reviews of entry level scopes...
Tom.G
Science Advisor

Just a note: A 10X 'scope probe has a 9MegOhm resistor in it to make a 10x divider with the 1Meg 'scope input.

Sound cards often have an input impedance around 47k making a 10x 'scope probe a 192x divider. And you could always add a resistor in parallel with the audio input to get whatever divider ratio you need.

Related Threads on Any recommendations for a good cheap USB oscilloscope?

USB and Other Cheaper Oscilloscopes

M
Is there any USB device for simulating

Any good sources for Instrumentation

Looking for a recommendation for a good book