Buoyancy/Gravity Concept - How to insert buoyant weight into water column?

I devised a concept a couple years ago for renewable energy and hit a stumbling block: How do you insert a buoyant object into the bottom of a water column with the smallest amount of energy?

Recently I revisited the concept and found some similar work online including this youtube video.


From my understanding, this concept is flawed because he's pumping the water in some fashion which uses energy. Otherwise the water would spill out of the bottom side opening.

I've attached an image to help visualize my question.

Any thoughts are appreciated.

Since this would appear to give you an endless supply of energy, the answer has to be no.
LValfre

I don't know about endless but it would be a start. I'm trying to sort out whether there is any way to insert a buoyant object at the bottom of a container of water. Gravity would of course have to supply the energy ... but if we can use buoyancy to raise our objects to that height in an efficient manner than we can maybe get close to it.

Either way I'd like to learn the physics behind the question and whether sealing the valves would allow such a process to be feasible.
ModusPwnd

That's been my stumbling block ... finding a way to push the object in with less work than it takes to get it to the top. If the object was not buoyant could it be dropped into B granted valve A is sealed? Say a rock or a metal object.

I'm under the impression if Valve A is sealed it won't rush out of an open Valve B. This is following the hand over the straw example where you pull the straw out and the water doesn't flow because the top is sealed creating a suction.

ModusPwnd said:
When you insert object B you need to do work. Work to raise the water level if valve A is open, or work compressing the air pocket if valve A is closed. In either case the work you do pushing object B into the column would be less than the work you can extract by letting the object float to the top. TANSTAFL

If valve A is closed, you don't need to compress anything to get the object in. You simply need to allow the water level at point B to rise when you put it in.

However, here's the problem I see with the idea in the first post: When you insert the object at point B, you'll displace a certain mass of water. After you allow the object to float to point A, the object has replaced the water at the top of the column and the water would then be located down at point B. I made an illustration to help visualize what I'm describing: 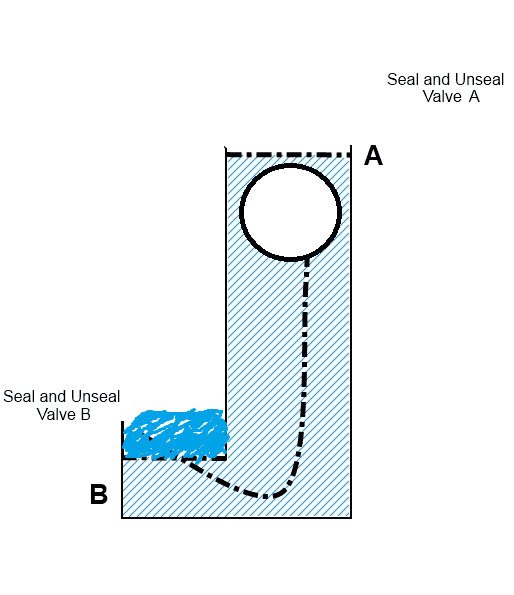 Ahh I see the flaw with this.

Originally I had envisioned an insertion chamber underneath the water column where the object could be inserted and then the water could be 'dropped' on it. The same issue would rise though ... how to get the displaced water to the top of the column again without wasting more energy than you gain from gravitational potential energy.

I want to experiment with it but I can't solve whether it's even possible and all odds are against it. If the weight reached the top and made it out of the column would the GPE ever be enough to surpass the energy needed to 'pump' the water back to the top?

Outside of this question, here's a man in India's idea that is roughly similar.
http://powerfromgravity.com/invention.aspx

Thought it was an interesting approach but it's lax in details so I can only speculate the majority of what's going on.

Thanks again for the insights guys!
russ_watters
Mentor

LValfre said:
If the weight reached the top and made it out of the column would the GPE ever be enough to surpass the energy needed to 'pump' the water back to the top?

No. This is a clear contradiction of the law of conservation of energy. And we don't discuss perpetual motion machines here. Thread locked.
Share:
Share

Related Threads on Buoyancy/Gravity Concept - How to insert buoyant weight into water column?

Weight given as buoyant

J
Weight of a body in a water column

Weight and buoyancy in air