Cause of water pressure in pipework

Am I correct in saying that water pressure (in typical domestic heating system pipework) is achieved by deformation of the pipes rather than compression of the water? I believe water to be virtually incompressible, so the 3 bar (or whatever) pressure must come from the elastic stretching of the pipework.

No, or perhaps I should say neither.

There are two main types of wet heating systems in the world. Sealed and vented.

Sealed systems typically have an expansion vessel (a rubber bladder in a metal tank) that maintains the pressure. The bladder is pumped up with air much like a car tyre. This also provides somewhere for the water to expand into. Without the expansion vessel small changes in water volume would cause large changes in pressure. There is almost always a Pressure Relief Valve fitted as well just in case the expansion vessel fails or the water is heated to boiling point. Typically the bladder is pumped upto 1-1.5 bar, it then increases to 2-3 bar when the system is filled with water from the mains (at 3-6 bar).

In vented systems (still common in the UK) there is a header tank mounted high up that provides the pressure and allows for expansion. The header tank is open to the atmosphere hence the name vented. Typical heights are perhaps 6 or 7 meters so the pressure is only about 0.6-0.7bar.
CWatters
Science Advisor
Homework Helper
Gold Member

Thanks for the information.

What about the case of hydraulic strength testing of pipes, where several bar of pressure can be used to test pipework (and there are no expansion vessels and the like)? Is the pressure maintained by the pipes pushing back on the water in this case?
CWatters
Science Advisor
Homework Helper
Gold Member

Consider the forces on a small section of the pipe.... 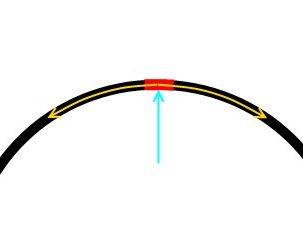 This bit of the pipe isn't accelerating so Newtons law F=ma says the net force (F) in all directions must be zero. The outward radial force due to the pressure of the water is countered by tension in the copper. Copper isn't particularly elastic so not much deformation will occur to the copper pipe unless the pressure is very high. Obviously if the pressure is high enough to break the pipe the tension force will disappear and some of the pipe might "accelerate" :-)

Even though water isn't very compressible it is being compressed very slightly. If you consider a small region of water near the pipe the forces on that must also sum to zero. The radial force from the rest of the water is balanced by the force of the pipe. So you can't really say that the pressure is "caused" by one or the other, it's both. 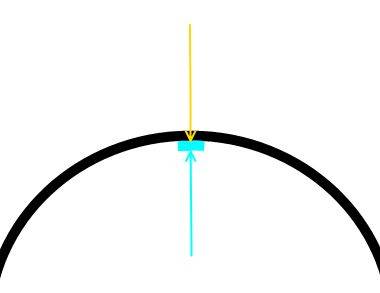 Now I think about it this must also be true for a system with an expansion vessel. In such a system the expansion vessel is what regulates the pressure when the water heats up or cools down but the forces will still be balanced as described above.

Jehannum said:
Thanks for the information.

What about the case of hydraulic strength testing of pipes, where several bar of pressure can be used to test pipework (and there are no expansion vessels and the like)? Is the pressure maintained by the pipes pushing back on the water in this case?

If it is a water-only test, yes, but I'm not sure that is a standard practice. Leak testing is often done with compressed air/nitrogen so you can detect leaks with a drop in pressure over time. I'm not even sure how to accomplish that with a system full of water.
Dullard

Actually, that's a very standard way to 'proof test.' The beauty is that the incompressibility of the fluid minimizes the stored energy - it makes failures much less spectacular.
russ_watters
Mentor

Dullard said:
Actually, that's a very standard way to 'proof test.' The beauty is that the incompressibility of the fluid minimizes the stored energy - it makes failures much less spectacular.

Yes, but it also makes achieving and maintaining pressure harder, so the test results may be less clear. Googling I see that it is done, but I'm having trouble finding an explanation of exactly how the pressure is applied.
CWatters
Science Advisor
Homework Helper
Gold Member

Depends if you are testing for leaks or safety. Our drains were tested using air pumped in by a hand squeezed rubber bulb. Our underfloor heating was tested using water pumped in using a thing that looked like a bottle jack.

Related Threads on Cause of water pressure in pipework

Cause of atmospheric pressure

Water pressure in a sphere

Partial Pressure in beaker of water