On the recent news announcement that finds a mismatch in the heavy-to-regular water ratio on 67P found by the Rosetta mission and Earth's oceans, I wonder if the passage of time has been considered? Could the several billion years that comets have been exposed to radiation have increased their heavy water ratios by means of cosmic or solar neutron radiation absorption that Earth and its oceans have been protected from thanks to our atmosphere and magnetic field?

I realize the chances of a free neutron striking just right at an atom to become absorbed are very minute, but surely over a long enough timespan (such as the billions of years the earth is theorized to have had its water content), this could have produced a measurably significant difference in heavy water ratios even if earth's oceans were seeded by comets?

And/or could it possibly be a factor that with Earth's much more significant gravitational field (compared with comets), our water is much more stratified, such that heavy water stays lower in our oceans, and even sinking beneath our oceans as our ocean floors continually sink away from and slide under the oceans in subduction zones due to plate tectonics? Wouldn't it logically follow the water 'lost' from the oceans in this fashion would have a higher concentration of heavy water than the surface oceans, and thus over time the ratio of heavy water in earth's oceans would gradually decrease?

Has either notion been explored and considered? I realize it is very early on in analyzing the Rosetta findings, and I know true science requires years of careful analysis, verifying results and peer review, but wonder if my science fanboyish ponderings have even slight grains of possibility to them, or if the theory of any common ancestry between comets like 67P and earth's oceans are as dead as the general media seem to make them out to be.

D-H differentiation in the earth's oceans is not going to be significant compared to the factor of 3 difference mentioned in the initial reports. Differentiation of the comet itself as a function of its thermal environment could easily account for the difference; it doesn't seem to have been examined in detail as yet.
Dotini
Gold Member

HowardVAgnew said:
On the recent news announcement that finds a mismatch in the heavy-to-regular water ratio on 67P found by the Rosetta mission and Earth's oceans, I wonder if the passage of time has been considered?

There may be more than than just a water mismatch between 67P and Earth. There is also any nitrogen mismatch to consider.

http://www.jpl.nasa.gov/news/news.php?release=2014-200
As planetary scientists investigate the mystery of how the solar system formed, isotope ratios are one of the most valuable types of clues they are able to collect. In planetary atmospheres and surface materials, the specific amount of one form of an element, like nitrogen, relative to another form of that same element can be a powerful diagnostic tool because it is closely tied to the conditions under which materials form.

The study also has implications for Earth. It supports the emerging view that ammonia ice from comets is not likely to be the primary source of Earth's nitrogen. In the past, researchers assumed a connection between comets, Titan and Earth, and supposed the nitrogen isotope ratio in Titan's original atmosphere was the same as that ratio is on Earth today. Measurements of the nitrogen isotope ratio at Titan by several instruments of the NASA and ESA Cassini-Huygens mission showed that this is not the case -- meaning this ratio is different on Titan and Earth -- while measurements of the ratio in comets have borne out their connection to Titan. This means the sources of Earth's and Titan's nitrogen must have been different.
Bystander
Science Advisor
Homework Helper
Gold Member

Were you able to make heads or tails enough of the JPL PR department's blather to decipher what the actual difference in 14/15 ratios between Titan and Earth is? Just to make it interesting I'll wager Earth to be "15-heavy."
Dotini
Gold Member

Bystander said:
Were you able to make heads or tails enough of the JPL PR department's blather to decipher what the actual difference in 14/15 ratios between Titan and Earth is? Just to make it interesting I'll wager Earth to be "15-heavy."

My main takeaway from all this is that scientists do not yet understand very well how cometary molecules separate into isotopes with different abundances.
Bystander
Science Advisor
Homework Helper
Gold Member

So much for that "hot tip" from my bookie.
Bystander
Science Advisor
Homework Helper
Gold Member

Dotini said:
My main takeaway from all this is that scientists do not yet understand very well how cometary molecules separate into isotopes with different abundances.

Dotini said:
My main takeaway from all this is that scientists do not yet understand very well how cometary molecules separate into isotopes with different abundances.

I'm afraid this is not limited to cometary molecules. The isotope ratio at the surface of celestial bodies could also influenced by planetary separation processes (e.g. geotectonics or erosion of the atmosphere).
TEFLing 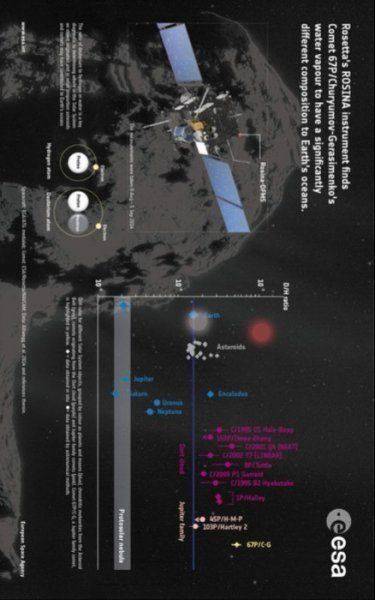 There is an ESA article about DH ratios

TEFLing said:
I annotated the figure to include the moon and Mars

Resolution isn't quite enough to actually make out any numbers. Could you give us a transcription, please?
TEFLing

Fantastic! Thank you very much.
TEFLing

it's only a matter of degree, from earth to the moon to Mars to asteroids and comets

looks to me like there is some process which affects all solid bodies, depleting H and or adding D, to which the sun and Jupiter are immune

that gets me thinking...

during the LHB ~4Gya

then UN grabbed comets that were already enriched in D relatively early in the life history of the solar system...

so what if comets' high D abundances are primordial ? What if D condenses into solid ices more readily than H? All the first icy snow flakes and hail stones in the solar system formed preferentially from DHO >> H2 O ??
TEFLing

if earth water is more like ( less unlike) solar values...

then maybe earth somehow retained more H or water from the solar nebula...

whereas Mars only has secondary, cometary water ( from impacts after the huge polar impact that cratered half of the planet, say) ??
Share:
Share

B "Snow" on comet 67P/Churyumov-Gerasimenko is actually stars

B Water in comet

I Star formation and heavy elements