How does parallel transportation relates to Rieman Manifold? 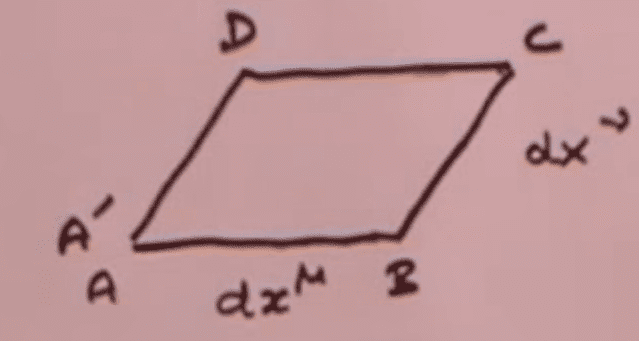 Source:
Basically the video talk about how moving from A to A'(which is basically A) in an anticlockwise manner will give a vector that is different from when the vector is originally in A in curved space.
$$[(v_C-v_D)-(v_B-v_A)]$$ will equal zero in flat space.
$$[(v_C-v_D)-(v_B-v_A)]-[(v_C-v_D)-(v_B-v'_A)]=v_A-v'_A$$
$$v_A-v'_A=dv$$
That is the difference, that is going to be the change in the vector as it is parallel transport around that parallelogram. In flat space, dv will be zero as the vector will be parallel transported and come back in the same magnitude and direction. but in curved space, there will be a difference, not in length but in angle of the vector.
$$v_C-v_D=\frac{∂v}{∂x^μ}dx^μv⇒∇_μdx^μv$$
change in vector between c and d is the gradient multiplied by the distance times the value of the vector. We need to use the covariant derivatives so instead of using the partial derivative, we use this ∇ instead.

$$(v_C-v_D)-(v_B-v'_A)=∇_μdx^μ ∇_νdx^ν v$$
I don't really understand this part. Like so just by derivative can we actually change the vector twice?

$$v_A-v'_A=dV=dx^μdx^ν v [∇_v.∇_μ]$$
And the commutator between the two covariant derivatives will give the Riemannian Tensor, which can be regarded as the Ricci tensor.

Think of the Earth. Stand where the Greenwich meridian crosses the equator and hold a vector pointing North.

Walk up the meridian to the north pole, parallel transporting your vector. That means always keeping it pointing the same way it was a pace ago. When you get to the pole you should find that it's pointing straight down the 180° meridian.

This is a general feature of curved spaces (it's not an effect of meeting at the pole or anything). The notion of "the same direction at two different points" is path dependent.

The covariant derivative measures the change in a vector along an infinitesimal displacement - it parallel translates the vector. Using it four times around an infinitesimal parallelogram is the "at one point" formalisation of my triangular trip round a sphere. The resulting information is encoded in the Riemann tensor, which describes the curvature of the space (or spacetime, in GR) at that point.
Last edited: Oct 9, 2016
pervect
Staff Emeritus
Science Advisor
Insights Author

Ibix said:
Think of the Earth. Stand where the Greenwich meridian crosses the equator and hold a vector pointing North.

Walk up the meridian to the north pole, parallel transporting your vector. That means always keeping it pointing the same way it was a pace ago. When you get to the pole you should find that it's pointing straight down the 180° meridian.

So if you move in a great circle starting at a point on the equator, a vector pointing north on the equator will continue to point north as we move towards the north pole on the 2d manifold - at least until we reach the north pole, where we run into a coordinate singularity and the whole description of north/south/east/west becomes ambiguous. (Every direction from the North pole is "south"). If we stop just short of the north pole, though, a vector that starts out pointing north will continue to point north as we parallel transport it.
PeterDonis
Mentor
Insights Author
2019 Award

pervect said:
If we stop just short of the north pole, though, a vector that starts out pointing north will continue to point north as we parallel transport it.

No, it won't. Ibix was careful to specify that the second parallel transport was along the equator, which is a geodesic. For this special case, yes, the vector will continue to point north.

However, if you start at a point on the Greenwich meridian just a little short of the north pole, and parallel transport a vector that is tangent to that meridian along a geodesic, i.e., a great circle passing through the point you start from, you will not be parallel transporting along a latitude line, because except for the equator, no latitude lines are geodesics. Of course there are an infinite number of possible geodesics through any point, but the usual requirement when looking for curvature is to pick the geodesic that is orthogonal to the one you are on, i.e., to the Greenwich meridian. That geodesic will be a great circle that curves southward--it will be just a little bit offset from the 90-east/90-west meridian. Parallel transporting your vector along this geodesic will cause it to start pointing east of north. (If you parallel transport it all the way back down to the equator, it will be pointing just a little bit north of due east.)
Ibix
Science Advisor
Insights Author

pervect said:
If we stop just short of the north pole, though, a vector that starts out pointing north will continue to point north as we parallel transport it.

I think you've been misled by the coordinate representation here. Think what our intrepid explorers would see as they approached a flag marking the pole: an approximately Euclidean plane with the two of them approaching from perpendicular directions. Each one is carrying an arrow, initially pointing at the flag. However they move, if they keep their arrows pointing in the same direction, their arrows will be perpendicular when they meet. If one moves along a line of constant latitude he describes a circle centred on the flag, but would be cheating outrageously to keep his arrow pointing at the flag through that maneuver - which is what you are suggesting, I think.

I'm cheating a bit by treating the area as truly Euclidean, but not by much because of local flatness. In fact the choice of route for the final few meters until they meet will affect the outcome slightly, even if they do remain close to the pole - just not by much.
pixel

The usual way to describe the process as keeping the vector pointing in the same direction, as many books do, can be confusing when first encountered - if it's always pointing the same way, then by definition it won't change.
Ibix
Science Advisor
Insights Author

Because the space/spacetime is curved and the notion of "the same direction" is a bit like the equivalence principle, I think. It's an intuition that breaks down if examined precisely enough, but has a well-defined mathematical expression. In this case, the notion of covariant derivatives being zero along certain paths.
pervect
Staff Emeritus
Science Advisor
Insights Author

Let's try the following description and see if people a) agree and b) like it. If you parallel transport a vector along a geodesic, it maintains a constant angle to the geodesic in question.

This description as written doesn't tell us how to parallel transport vectors along a non-geodesics, but hopefully it's good enough to work out the example in which the only parallel transport occurs along geodesics, and see that the vector is in fact rotated.
PeterDonis
Mentor
Insights Author
2019 Award

pervect said:
If you parallel transport a vector along a geodesic, it maintains a constant angle to the geodesic in question.

More precisely, the inner product of the tangent vector to the geodesic and the vector in question remains constant. Yes, this is true; parallel transport preserves inner products.
Ibix
Science Advisor
Insights Author

Misunderstandings all round, then. Sorry.

I do agree with your description. However, I think that it might be introducing things that are a bit beyond someone like the OP, who asks questions like "Do I need to learn about differential geometry in order to understand Riemannian manifold?" Perhaps I could revise my description to start the journey at the pole, avoiding the directional ambiguities at the pole when they meet up. I could also explicitly make clear, for those in the know, that I am aware that I'm cheating (in a sense) by picking a case where intuitive notions of "in the same direction" match up in both coordinate and local representations, and the fact that I'm taking advantage of our intuition of how ##S^2## embedded in ##R^3## works.

I should also belatedly reference Carroll's lecture notes, which is where I first saw the example. I lost my first version of the post and apparently forgot to put the reference into version 2.
You must log in or register to reply here.

Related Threads for: How does parallel transportation relates to Rieman Manifold?

Riemannian Geometry is free of Torsion. Why use it for General Relativity?

A Did Einstein not believe that general relativity geometries

Is a Pseudo-Riemann Metric Intrinsic to General Relativity?

Does Einstein's General Relativity need to be adjusted for the Higgs field?

How to determine extension of a pseudo-Riemannian manifold