Is it possible for one celestial body to trail another indefinetly?

In other words, are there any circumstances in which one object, captured by the gravity of another, would simply trail behind it indefinitely, instead of revolving around it or crashing into it? Is it possible? It seems reasonable to me that under certain circumstances it could happen, but someone tells me it's impossible, and that, except in the case of one object breaking up into several (like a commit breaking up), it can't happen.

As long as there are just two bodies under each other's gravitational influence, it's not possible.
Take a simplified scenario, where one of the bodies is much less massive(m) than the other(M), so that only the massive one attracts the light one. The m body will always feel the force of gravity, constantly accelerating towards M. To preserve the intial setup where both are at rest with respect to each other, you'd have to constantly keep pushing the body M away at the same rate as it pulls in the body m.

If you introduce a third massive body, that both M and m are orbiting, then you can get a class of solutions that is close to what you're asking for. Namely, M and m can follow one another as they orbit the central mass. In this case, the body m is at all times under the gravitational influence of M, as well as the central mass, so it can be said that it is trailing M.

These solutions are called the Lagrangian points. 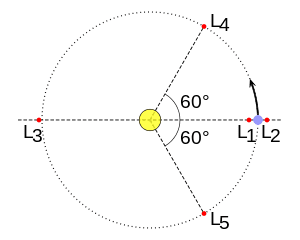 (the blue blob representing M, the red dot m)
Of these five points, only L4 and L5 are stable.

To reiterate, if by trailing you mean being affected by the gravity of another body but neither obiting it nor changing the distance to it, then L4 and L5 should do.

By the way, a comet(or any other body) breaking into parts will not stay in a static configuration indefinitely. Either the parts will move towards each other under mutual gravitational attraction, or move away from each other affected by whatever force caused the breakup in the first place(tidal forces for example).
You must log in or register to reply here.

Related Threads for: Is it possible for one celestial body to trail another indefinetly?

Celestial body could to return tho the star for another perihelium?

I Visibility of celestial bodies during the daytime

Data on the Velocity of the Celestial Bodies Orbiting a Galaxy

Is there a celestial body bigger than pluto. (appart from planets and stars, etc.)

B Why do most of the celestial bodies rotate about their axis?

Travel to another moon/planet/gravitational body