dlgoff said:
Awesome. Love it. I'm guessing the language was BASIC? Do you still have the book? 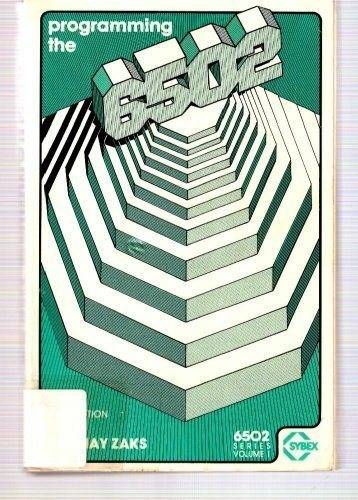 Lol. That rules the world. Idk, I'd have to look around. Actually, I think I might. The Vic-20 came with basic pre-installed. I don't know if installed is the right word, there really wasn't enough ram to install anything. I remember having all my programs "installed" on cassette tapes. I can't remember if I had to manually load BASIC or not, I don't think so.

Here's a good story, though. I don't know if you remember, but there used to be this magazine called COMPUTE! Yes, with the exclamation point included. In 1982, from what I remember a good number of the articles were hobbyists publishing programs for the Vic-20 and perhaps some other similar builds. This was before the IBM hit big. I actually wrote a video game called "Blitzoid" that I submitted to Compute! that they accepted for publication and paid me, get this, $175 for. Not bad for a 14 year old. I thought I was going to be the next whiz kid (which didn't happen)

In any case, this game had an, admittedly, crude resemblance to "Defender," and, although I'd like to accuse them of ripping me off, it looks as though Defender came out in 1980. So maybe I'm the culprit. The interesting part, though, is that I initially wrote the whole program in Basic, but it was too slow. I found that there was one subroutine that was the issue, one that was repeated many times to move the "ship" up and down the screen. My remedy was to write the subroutine in machine/assembly language. But guess what, I had to buy another one of those 30 dollar cartridges to do it. Lol. That was a proprietary ROM chip, I believe, so I just couldn't go to radio shack and buy it.

Whatever, the case, I was blown away at the difference it made, that subroutine actually made it a fun, playable game. I remember spending a lot of time on it trying to tighten up the code, and did some creative things, which is why I think Compute! bought the code.

By the way, I don't think they ever actually published the article. I contacted them several years later and they said at that time they were just buying up a lot of the submissions for use in a special video game issue that never went to press. Oh well, I still got the $175, so that's cool with me.
Last edited by a moderator: May 6, 2017
davenn
Science Advisor
Gold Member

The "Basic Interpreter" firmware was on ROM chips, separate from the user RAM

Them were the days haha

davenn said:
The "Basic Interpreter" firmware was on ROM chips, separate from the user RAM

Them were the days haha

Lol, davenn. Thanks for that, That makes sense now. ROM chip on the motherboard. Those were the days. I remember back then that we all thought that the utility of computers was going to be to turn your lights on and off during the day/night cycle and program your water sprinkler, etc. That may seem absurd now, but we really didn't know where this thing was going to go.

So, personally, what I thought was going to happen in 1985 didn't actually happen until basically 2010. Now it's happening. I think for the old timers like me, it's coming as a bit of a shock. Not because we didn't expect it, but because we expected it a long time ago and just thought that maybe it just wasn't ever going to happen. But now it is..
dlgoff
Science Advisor
Gold Member

DiracPool said:
I initially wrote the whole program in Basic, but it was too slow. I found that there was one subroutine that was the issue, one that was repeated many times to move the "ship" up and down the screen. My remedy was to write the subroutine in machine/assembly language. ...
... I was blown away at the difference it made, that subroutine actually made it a fun, playable game.

Most of the first old computers ran an Interpreter Basic. I bought Borland's Turbo Basic that had the feature that allowed you to make calls to DOS interrupts. This made it possible to get your fingers into the computers hardware.


Unlike most BASIC implementations of this period, Turbo Basic was a full compiler which generated native code for MS-DOS.

IDK, dlgoff, I'm not that sophistcated. Lol. I just remember I bought a cartridge that let me program in assembly language. Now you got me searching the web to find it. I don't want to do this cause it just reminds me of lost dreams...

I always think back on what "could have been" if I didn't drop the ball an try to become a professional surfer at 16, which didn't work out, along with all of my other hair-brained schemes. Speaking of which, I'm still working on hair-brained schemes that aren't working out.
dlgoff
Science Advisor
Gold Member

Not to worry. I just completed the third revision of the level control for my automatic chicken watering system.

BTW Check out some of the things you can do with DOS INT 21h.
Last edited: Jul 22, 2014
dlgoff
Science Advisor
Gold Member

Thanks Mentor for the deletion. Here's a smaller size but I had to make it an attachment. 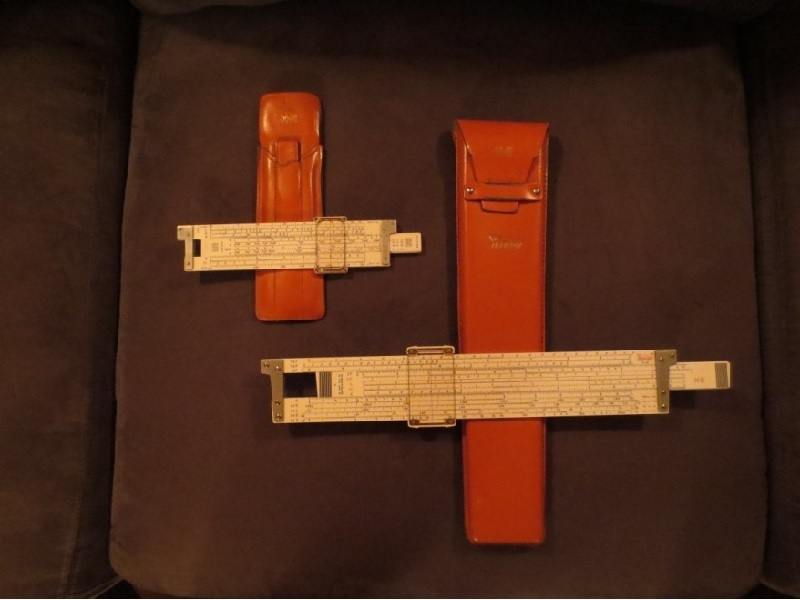 The reason I want to show it again was that I found the Deci-Lon's "Operator Manual". 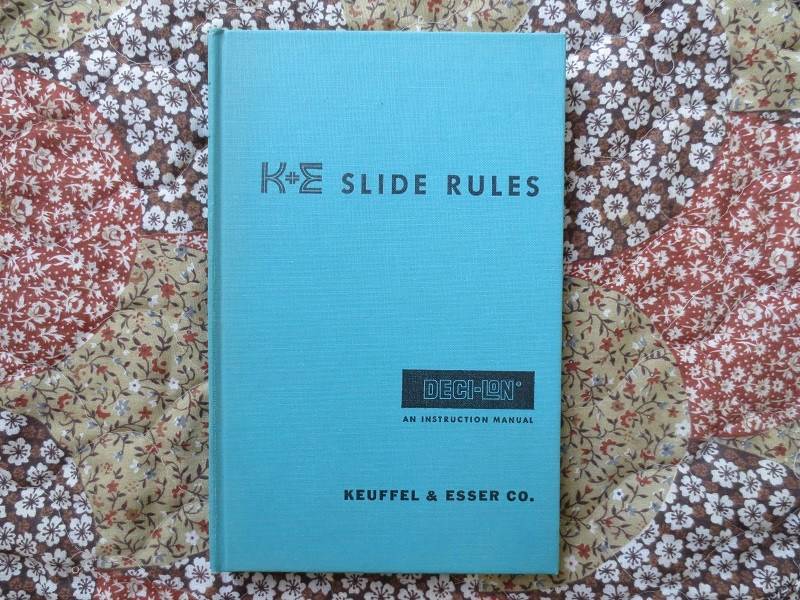 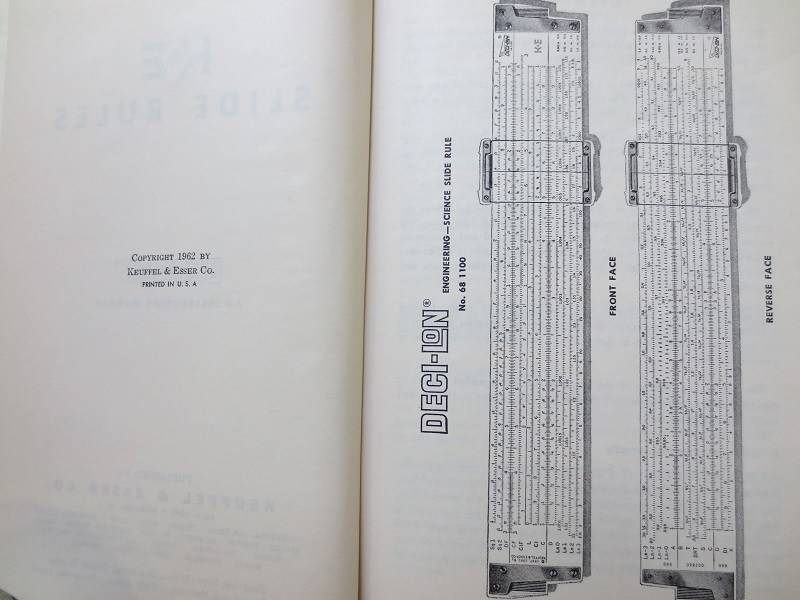 I used it during first year of university, until I bought a TI SR51 (20 memories) during early undergrad years, then a TI-58C with adjustable memory (50 or so registers, and modules) during my later undergrad years, and finally an HP-41CX (senior year for grad school).

I saw an even larger slide rule in a museum. I'll have to take a picture of it and post it later.

Where's Integral? He posted yesterday that it was the 400th anniversary of Logarithms.

What would these bamboo computers look like, if not for Logarithms?

Astronuc said:
I saw an even larger slide rule in a museum. I'll have to take a picture of it and post it later.

Take a peek at this collection of classroom slide rules.

At my old HS, the physics classroom had a large slide rule which spanned the width of the chalkboard, and it was large enough to be visible to students sitting in the back of the class. Of course, once calculators (even expensive four-function ones) became available in the early '70s, I don't think the instructor or anyone else ever touched that classroom slide rule again.
Astronuc
Staff Emeritus
Science Advisor

SteamKing said:
At my old HS, the physics classroom had a large slide rule which spanned the width of the chalkboard, and it was large enough to be visible to students sitting in the back of the class. Of course, once calculators (even expensive four-function ones) became available in the early '70s, I don't think the instructor or anyone else ever touched that classroom slide rule again.

My high school had one of those large slide rules above the chalkboard. I can't remember if it was in physics or chemistry, but I think it might have been portable (two people carrying it).

One of my classmates had one of the first TI calculators, but he had to use a slide rule just like the rest of us.

The physics department of the first university I attended was desperately searching for any student, undergrad or graduate, who could program microprocessors to do physics calculations.
SteamKing
Staff Emeritus
Science Advisor
Homework Helper

I had bought a K+E slide rule, a fancy one, for taking physical science in HS in 1972. It could do logs, trig, etc. and had a fancy leather case. I don't recall ever using it for schoolwork, because soon after getting the SR and starting class, some of the students had some early calculators, including perhaps the HP-35. Well, that was way out of my price range, but my folks did get a 4-function Brother calculator, which was about the size and weight of a brick. I forget the price of the Brother, but it was cheaper than the HP.

Later, when I started chemistry about two years later, the Brother was hopelessly outdated, so I got a TI SR-50 scientific calculator, which cost about $150 IIRC. Not as cool perhaps as an HP, but it could hold its own.

The big news came in my senior year at HS when I was taking physics. One of my classmates, whose father was a petroleum engineer, traded in his HP-45 on the then brand-new HP-65 programmable, which then cost a whopping $795 retail (In those days, a new compact car had a base price of about $3500.) My father had retired from NASA by that time, and the Marshall SFC in Huntsville was offering HP-65s at a slight discount.

My folks snatched one up for me, but when I got the HP-65 and started using it, the display crapped out after a couple days, so I had to send it right back to HP to be fixed. I finally got it back later that summer, and it worked pretty much flawlessly, but I back slid to the old TI SR-50, which I used at college.

The HP-65 did have a neat plastic clam-shell carrying case, into which one could put the calculator, the charger, and a few of the magnetic cards which could be used to store programs for the calculator to load and execute.
Share:
Share

How old are my daughters?

P
Is my computer safe?

How old are my 3 children?