This is just an example/solution to a timing diagram/gate delay for the circuit of logic gates. I am reading ahead of the chapter on gate delays & time diagrams, however, the book doesn't provide as much information. I am unsure how the solution came about in drawing their timing diagram from scratch, and thought maybe someone could help clarify this to me? Are they simply taking consideration of the time delays FIRST or the initial states FIRST? 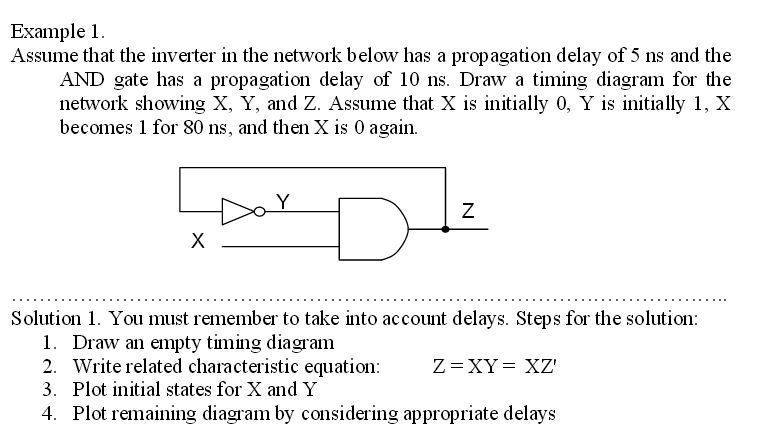 I understand that when the input to a logic gate is being changed, its output won't change instantaneously. Also that switching elements within the gate take some amount of time to react to a change in input, so that the change in the gate output is delayed with respect to input change.

What is your question exactly?
Aristotle

Yes, I understand the set up for the initial states. Here is what I have so far:

Also in the graph that I've drawn...is it correct or not that I draw a '1' of only length 5ns in the 'Z' row (from 20ns to 25ns) , or must it extend from 20-30ns? That is the part I am confused with, and as continuing with the completion of the graph. Any advice would be appreciated. Thanks!
phyzguy
Science Advisor

phyzguy said:
I don't understand why you have the orange line from 10-15 ns in Y. You should assume at the beginning that the signals X,Y,Z have been in their states for a long time and nothing is changing.

My thought process at first was that initially when X=0 and Y=1, then Z= 0....after '0' makes its way to the inverter, then you would take consider of the 5ns delay.


phyzguy said:
You should assume at the beginning that the signals X,Y,Z have been in their states for a long time and nothing is changing.

So you're saying that Y should not have a 5ns delay immediately, but until 'Z' changes? I know that X's inputs will determine the change in Z. Sorry I am a little slow trying to visualize the concept. Would it be possible for you to pinpoint what you're trying to say with the graphing diagram solution in the example?

Yes I understand that part.
Aristotle

Next, when Z's output becomes 1, Z changes, so then there will BE a 5ns DELAY, correct so far?...X remains unchanged--still '1'. so we DONT take consider of a 10ns delay.

My question is about drawing the graphs...

which one is appropriate, the first or second? I am confused on whether drawing only a '5ns line' on row Z or a '10 ns line'.

Aristotle said:
My question is about drawing the graphs...
which one is appropriate, the first or second? I am confused on whether drawing only a '5ns line' on row Z or a '10 ns line'.

Well, neither one is correct. You should draw a 15ns line for Z. After Z transitions high, it will stay high until 10ns after one of the inputs to the AND gate changes again. X will not change until much later, so when will Y change? Y will change 5ns after Z changes. So Z will stay high for 15 ns. I think what you are missing is that, while it takes 10ns for a change to propagate through the AND gate, after the output has changed, the output will retain its state indefinitely until one of the inputs changes again. It doesn't just go high for 10 ns and then go back where it was.
CWatters
Science Advisor
Homework Helper
Gold Member

What phyzguy said. I prefer to draw arrows on the drawing to show the delays..

Confused on Gate Delays, what would the wave form look like?

Logic Gates (OR and AND) Wave Form Diagrams

Building a logical gate function with NAND gates only