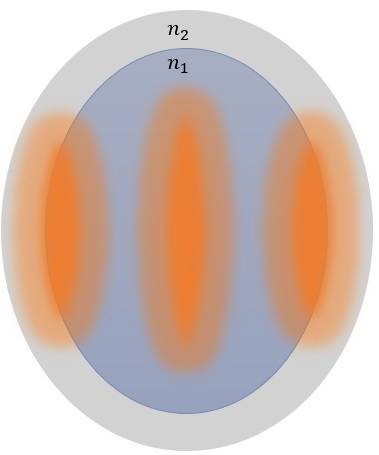 If I have three modes in an optical fiber with elliptical facet as shown in the figure, what would be the polarization direction of the modes... what I know that it is linear polarization and could have several configuration.. but what I want really to know that if could be a situation where the oscillation of the modes are in the same time in the same direction.. or if the polarization in middle mode points up then the sides modes point down and vice versa..?!

You say you have three modes as shown in the figure as if the figure shows three modes. You understand that that picture would only be one of the three modes, right? Also, that picture doesn’t seem right in that the higher order modes should show lobes along the long axis shouldn’t they?

Look at figure 6 in this reference:
https://www.ijert.org/research/fem-study-of-elliptical-coreoptical-fibres-IJERTV2IS70065.pdf
That’s what the modes usually look like in a three mode elliptical fiber.

Given a large enough core compared to the wavelength you can certainly have a mode like you show but then there would be many more allowed modes because you would have more than three transverse modes in the other dimension and all combinations of those orthogonal indices.

For the three lobed mode like you show the direction of polarization will be in the same direction throughout the mode, for example, vertical.

Your question of whether the instantaneous field can be up in one lobe when it down in another is different. With linear polarization the field is oscillating up and down in a plane. It is switching between pointing up and down at terahertz frequencies. Your picture of up and can only be a instantaneous snapshot of the field direction. In that case those aren’t different polarization’s. All lobes are oscillating with the same vertical polarization but the lobes are out of phase.

That also is something that cannot happen in a propagating mode. By definition a transverse mode is a mode that propagates down the fiber without the mode shape changing. If there is a phase variation across the mode, energy will flow in the transverse direction (perpendicular to the phase front, you see) and the transverse shape will change. By definition that is not a mode.
Sciencestd

Thank you so much for your detailed answer and the article you shared thank you :)
About the three modes alignment, I think as I read in one article it can be both... along the long axis of the ellipse and also along the short axis... it depends on the V-number value... I don't know actually the exact physical reason why should the lobes change the alignment...
Share:
Share

I Light coupling from optical fiber to glass?

I Curious formula for elliptical polarisation

Optical trapping over a fiber

I Mirror rotates any polarisation by 90°?