Question on initial viral load and disease progression of Covid-19

Summary
Does initial viral load of Covid-19 have any effect on disease progression?

What is the rate of Covid-19 infection compared to the rate of immune response? Faster, slower? Consider two scenarios:

Scenario 1: Small initial exposure to Covid-19. Person is briefly exposed to Covid. They perhaps touch infected surface and touch inside of their nose.

Scenario 2: Large initial exposure to Covid-19. Person is on a bus for 30 minutes with relatively large amount of covid in the air and breathes a large amount of the virus deep into their lungs.

Considering both scenarios equally matched (same age, healthy individual, no co-morbidities, etc.). Will the first person have more time to mount a successful immune response or does the virus replicate too quickly for this to matter?

Here's an initial assessment that suggest it may:
Initial viral load and severity of Covid-19

The evidence suggests an association of viral dose with the severity of the disease.

Is this due to the rate at which the immune system responds relative to viral infectivity?

I think it's important to ask this question because if initial viral load matters, it should be more emphasized in the media and in terms of directive health measures. I've not heard anyone in media mentioning this.
Last edited: Oct 21, 2020

Anyone who has raised children is aware of the fact that: I got over my cold, my kid then got it and sneezed on me. I got the cold again.

A huge titer of virus sprayed in your face can overcome your immune response.

I always took this as a given - a dose-response curve at it were. No joy in papers on the subject with regard to Covid-19. My google foo must be lacking.

But Horwitz and Mateen say that factors outside of doctors' control are also playing a role in driving down mortality. Horwitz believes that mask-wearing may be helping by reducing the initial dose of virus a person receives, thereby lessening the overall severity of illness for many patients.

From an article on declining death rates for Covid-19 patients across the age spectrum:
https://www.npr.org/sections/health...ies-point-to-big-drop-in-covid-19-death-rates

And seems to be your desired suggestion: wear a mask save a life.

Sorry, this is the best I can do.
Fervent Freyja
Gold Member

It’s found so far that initial viral dose can impact severity of symptoms:

“The literature on infective dose, transmission, and routes of exposure was limited, especially in humans, and varying endpoints were used for measurement of infection. The evidence, albeit limited, indicated that the minimum infective dose of COVID-19 in humans, is higher than 100 particles, slightly higher than the hundreds of particles estimated for SARS-CoV-1. Despite variability in animal studies, there was some evidence that increased dose at exposure correlated with higher viral load clinically, and severer symptoms. Higher viral load measures did not reflect COVID-19 severity. Aerosol transmission seemed to raise the risk of more severe respiratory tract complications.”

Immune response can be considered an ordered process that happens in stages.

In your first scenario, with a small dose of a few or dozen or so particles, the speed in which first immune responses react will prevent secondary responses from being needed, and we can’t even consider that an infectious dose.
Last edited: Oct 21, 2020
aheight

Thanks guys. I was suggesting if this is so, then it should be more emphasized in public. Granted, wearing mask, distancing, keeping hands from face are emphasized regularly but not the initial viral load. I see Dr. Sanjay Gupta on TV almost every day and I don't recall him bringing up this fact, explicitly. Other too. I suspect the general public is not so keenly aware of this "dose-response" phenomenon, quantitatively I mean: the important factor should be reduce the gravity of initial viral load to give the immune system time to evoke an effective response. If that is the case.

aheight said:
I think it's important to ask this question because if initial viral load matters, it should be more emphasized in the media and in terms of directive health measures. I've not heard anyone in media mentioning this.

I believe that this is implicit in everything we hear from the experts. They do not say that masks, social distancing, hand washing, etc. stops every single virus molecule. The fact is that those measures just reduce any initial viral load.
jim mcnamara
Mentor

Once again this is the problem: - The Helen Quinn moment - where science types use 'believe' and non-science types hear that word and say to themselves 'this guy does not know for sure at all' It is in the quote I included above - "Horwitz believes ..."
See:
https://ned.ipac.caltech.edu/level5/March07/Quinn/Quinn.html
aheight

FactChecker said:
I believe that this is implicit in everything we hear from the experts. They do not say that masks, social distancing, hand washing, etc. stops every single virus molecule. The fact is that those measures just reduce any initial viral load.

And how is severity of illness a function of initial viral load, all else equal in terms of health and absence of co-morbidities?

All else equal, is the spectrum of disease illness a function of initial (and perhaps continued) viral load and is this a reflection of the relative rates of immune response and virus replication? Is there any sort of plot of this behavior -- I mean viral load (initial or otherwise) and severity of infection? All else equal of course. One based on empirical data, not just some simple line with slope=1.
Last edited: Oct 22, 2020
jim mcnamara
Mentor

Oh. My bad... You want dose response curves for viral pathogens:
Methods and models --- here is one for background
https://www.ncbi.nlm.nih.gov/pmc/articles/PMC7117404/

If you want a more practical level point of view, this is infection control protocol for SARS-COV-2
aimed at providers:
https://www.covid19treatmentguidelines.nih.gov/critical-care/infection-control/
it assumes some background, I think.
FactChecker
Science Advisor
Gold Member

Is there a reason to think that an initial viral load is measurable and has ever been measured? I would assume that the initial exposure to the virus is very small, localized, and not measurable.
berkeman
Mentor

FactChecker said:
Is there a reason to think that an initial viral load is measurable and has ever been measured? I would assume that the initial exposure to the virus is very small, localized, and not measurable.

Apparently it is measurable and that is done in the "Challenge Trails" for the vaccine (of course they are exposing people to the virus on purpose, so the amount of the virus is easier to control). Here is a post from the Corona Virus thread in the General Discussion forum:


Ygggdrasil said:
It looks like the UK is planning to go forward with challenge trials in January to compare the efficacy of various vaccine candidates:

In this initial phase, the aim will be to discover the smallest amount of virus it takes to cause a person to develop COVID-19. This is known as a virus characterisation study.

Those were great references. Thanks. However, looks like the link above is for SARS-CoV and not SARS-Covid 19 (SARS Cov-2). However, there are similarities I imagine. Here's my dose-response curve based on the data in that link. I believe PFU means effective number of virus particles, i.e., if exposed to about 1000 particles, have almost 100% chance of being infected by SARS-CoV (presence of antibodies in blood): 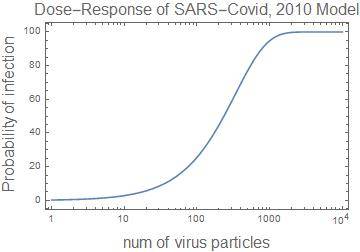 aheight said:
Those were great references. Thanks. However, looks like the link above is for SARS-CoV and not SARS-Covid 19 (SARS Cov-2). However, there are similarities I imagine. Here's my dose-response curve based on the data in that link. I believe PFU means effective number of virus particles, i.e., if exposed to about 1000 particles, have almost 100% chance of being infected by SARS-CoV (presence of antibodies in blood):

I think one of the issues to consider is summed up in one of your earlier comments when you use the phrase, "all things equal" unfortunately they never are. We are still trying to establish all the variables that may be involved in both susceptibility to infection and disease severity.

In the first link by Jim, which describes elaborate control conditions in order to establish what they describe as an "accurate estimate" of the initial inoculum needed to establish an infection. This is in fact a rather useful oxymoron when discussing a great many diseases and while studies like this are very interesting in understanding the disease, the greater the degree of control used in establishing this number the less applicable it is in real world prediction.

However its fairly well established that the initial inoculum is important, as in most infections there is a period in which the pathogen has to gain entry to the body and then reproduce while our body develops an escalating immune response. Gaining entry can be a major problem though the bigger the inoculum the more likely some are to get through, luck plays a major role here. On entry the more cells that are infected the greater the chance that the viral reproduction will outpace the immune systems attempts at control. This really is where the initial inoculum plays its biggest role, a large inoculum shortens the time needed to establish a symptomatic infection, though even this is a generalisation. The site of entry and the degree of immune surveillance, which is always variable and based on how busy its been dealing with other issues are also important. This is why there is an interest in the effects of the BCG vaccine, it activates a fairly long term effect that increases immune surveillance.

However the course of the disease and its outcome is only partially related to the degree of viraemia, in fact the most sever illness is more a feature of an individuals immune response rather than the virus itself. For that, it may be, that the best predictors are age and obesity. Then, the ability then to deal with the effects of the immune response is largely down to the overall state of health.

This means that the initial dose is significant in whether an adult develops a symptomatic infection (young children are different) and the length of the incubation period, but it doesn't seem to be a good predictor of the disease severity or the outcome.
aheight

Just a follow-up with this thread: Today Dr. Sanjay Gupta posted an article at CNN about initial covid-19 viral load. I thought it was very informative for the general public. Maybe he read this thread. Thanks Dr. Gupta