I am trying to read about and understand string theory. But in trying to understand how it reconciles with the world of quantum field theory and quantum mechanics, I am getting a little confused. How does the string move through and propagate through the quantum field?

Does string theory, for example, propose that there is only one field, the String field, in which the strings vibrate? And the different particles are just different vibrations of the string of this fundamental String field?

That's a very good question, the explicit answer to which is not easy to find in the string literature.

The first thing one needs to know is that "string theory" is not one theory. There are at least 3 versions of the theory, namely
1) perturbative string theory
2) string field theory
3) M theory
Each of these versions provides a different answer to your question.

1) Perturbative string theory is the best understood version of string theory. According to this theory, there are no fields at the fundamental level. There are only strings, which scatter according to the "first quantization" rules similar to that in the book Bjorken and Drell "1", Relativistic Quantum Mechanics. But once you calculate the scattering amplitude and make a low energy limit, you observe that the same scattering amplitude can be obtained by a certain field theory. This field theory is only an effective theory valid at low energies, not a fundamental theory. Fields are emergent in perturbative string theory, not fundamental. The problem with perturbative string theory is that it is almost certainly incomplete. Therefore any general conclusions such as the ones I've just made should not be taken too seriously.

3) M theory is widely believed to be the most fundamental formulation of string theory. In principle, it should give the best answer to your question. Unfortunately, M theory is not very well understood. It is not even known what the fundamental objects in this theory are supposed to be. There is even no agreement what the "M" stands for. Therefore, at this moment, M theory does not provide a clear unambiguous answer to your question.
Last edited: May 29, 2018
Urs Schreiber
Science Advisor
Insights Author
Gold Member 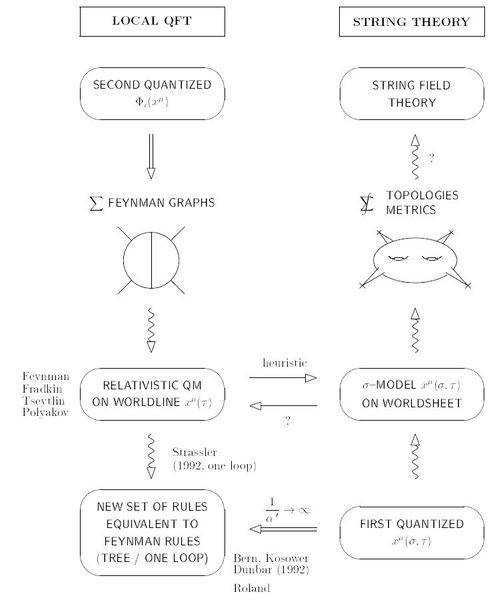 The zero-mass states in the open-string particle spectrum for a system of N coincident D-branes yields a set of interacting quantum fields which is exactly a U(N) gauge theory. (The string theory does contain other interactions, but they are only detectable at very high energies.) Gauge theories were not invented starting with bosonic or fermionic strings; they originated from a different area of physics, and have become quite useful in their own right. If nothing else, the relation between D-brane geometry and gauge theory offers a useful pedagogical tool for explaining gauge interactions, even if string theory fails to be the "theory of everything".
Urs Schreiber
Science Advisor
Insights Author
Gold Member

John G said:
The zero-mass states in the open-string particle spectrum for a system of N coincident D-branes yields a set of interacting quantum fields which is exactly a U(N) gauge theory.

Not sure why you just recalled this, but this gives me occasion to highlight that this pillar of string theory lore (underlying absolutely everything, from geometric engineering of gauge theories, via intersecting D-brane model building to AdS/CFT duality) had remained without real proof until maybe recently (quoting references from here):


There, this is called an “obvious guess” (first line on p. 8). Subsequently, most authors cite this obvious guess as a fact; for instance the review


Similar numerical derivation, as well as exact derivation at zero momentum, is in


The first full derivation seems to be due to


which is surveyed in

[URL='https://www.physicsforums.com/insights/author/urs-schreiber/']Urs Schreiber[/URL] said:
Not sure why you just recalled this, but this gives me occasion to highlight that this pillar of string theory lore (underlying absolutely everything, from geometric engineering of gauge theories, via intersecting D-brane model building to AdS/CFT duality) had remained without real proof until maybe recently (quoting references from here)...

You relating the worldsheet to Feynman path integral wordlines reminded me of years ago when you mentioned on Woit's blog that there's a deep relation between the worldsheet and path integrals. Tony Smith was in that conversation and U(N) gauge theory is the string theory-like part of Smith's model. I think this is one area where you, Smith, Witten, Polchinski, etc. have had some seriously good intuition even without a lot to go on empirically. It is I think the best response to give to those who think string theory can't be related to known physics (Standard Model and relativity). U(N) gauge theory doesn't even need supersymmetry so even those tired of waiting for superpartners should I would think stay interested in string theory. For Polchinsky via Tony, I've been thinking recently about this part.


Polchinski says "... there will also be r^2 massless scalars from the components normal to the D-brane. ... the collectives coordinates ... X^u ... for the embedding of n D-branes in spacetime are now enlarged to nxn matrices. This 'noncummutative geometry' ...[may be]... an important hint about the nature of spacetime. ..."

Tony relates Cl(8) to elementary cellular automata and I used to work with cellular automata at IBM. I've always though thought I should understand Tony's relating better than I do so I've been trying to put it into a formal Rodrigo Obando-like rule space.

Obando in the above paper talks about primitives in a basis vector-like way but you can get the 14 Cl(8) Pertti Lounesto 4-vector primitive idempotent terms to show up on matrix diagonals of an Obando rule space (position-momentum spacetime for Tony). There's however kind of two different rule space basis vector orderings to use. There's one very close to what Tony has mentioned that seems related most to Clifford duals (gradings 0 vs 8,1 vs 7, 2 vs 6, 3 vs 5, and 4 self dual) and this shows the matrix diagonals (using either Tony's order or the closely related order). Then there's an order related most to getting group theory Cartan subalgebras and deriving rather than showing the Pertti Lounesto primitive idempotent terms for the matrix diagonals.

I'm still trying to understand it better but unfortunately I'm much better at the rule space part than the Clifford algebra/group theory part (and Tony is perhaps a bit different than others in this area). I came here and looked at the recent topics after looking up some old Carl Brannen and Marni Sheppeard conversations about Primitive Idempotents. I probably need to get hold of Tony, but he's not responding to the email I used with him ten years ago or so.
Urs Schreiber
Science Advisor
Insights Author
Gold Member

John G said:
It is I think the best response

Is string theory a theory of quantum gravity?

Is Quantum foam a part of string theory?

Quantum theory vs String theory (Who's the best?)

String theory and the M theory?

B What exists between Strings in String Theory?