I have a ball of mass m that is situated on horizontal plane on the northern Hampshire. I am asked to show that the ball is moving, clockwise, in a manner of

where v is the ball's velocity, Ω is Earth's angular velocity, and λ is the terrestrial latitude

So here's what I tried doing:

I know that the Earth's angular velocity is given by Ω = Ω (cosλ,0,sinλ)
In the Northern Hemisphere thus it is given by: Ωsinλ

I think that I need somehow to add Coriolis Force but I'm not sure where or how to start the equation of motion.

timetraveller123 said:
Forum rules is that you have to show work
so i will just provide the equation for coriolis force
##
F_{coriolis} = -2 m \vec \omega \times \vec v
##
where omega is angular velocity of earth and v is the velocity observed in the rotating frame

Thank you. So this is where I got so far: the equation of motion is given, in this case, by:

I could eliminate the mass from both sides.
and I also know that the motion is perpeniduclar to the rotation axis, so the coriolis force could be just: 2*m*w*v

so I'm left with:

Thanks a bunch for the help!
Last edited by a moderator: Nov 6, 2018
timetraveller123

physicschick21 said:
I got so far: the equation of motion is given, in this case, by: 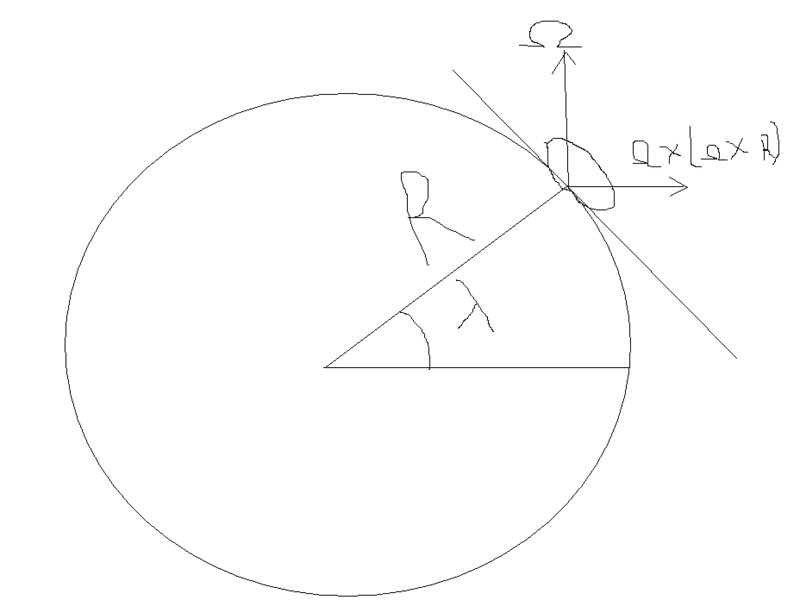 edit :
i just realised that if you assume earth is perfectly spherical there is no way of definitively saying it rotates clockwise unless you are given V as you dont know which term outweighs

The more experienced pf members help me verify thanks

Ok! I think I understand what you wrote. I'll try to derive the equation for r.. hopefully this works out. You are superb!
timetraveller123

Thank you :)
You're very kind!

I'm still stuck and not getting this. I'll try to read some more online and maybe I'll understand what I'm missing and get the exact equation they're looking for
physicschick21

Thank you! I understood everything now! :D
Log in or register to reply now!

Reference frame, referential with motion, describe the motion of a particle/Coriolis

Motion in a Rotating Reference Frame