Practice your skills at docking Dragon with the ISS. Could be a lot more stressful in the real thing.

Got it on the first try. Zero out Roll, Pitch, Yaw. Bring Y and Z close to zero. Then move in slowly - adjusting Y and Z as required.

I approached at about 12cm/sec until I was within a few meters. Orbital mechanics did not seem to be an issue.
anorlunda
Staff Emeritus
Insights Author

That was fun. I also nailed it the first time using @.Scott 's tips.

It reminds me of the Lunar Lander simulator on my old Apple ][. I crashed most of the time but my kids could do it fine.
Filip Larsen
Gold Member

Since the simulation starts you with zero relative velocity and since translatory controls has a fairly big impulse bit it is easy to get a "non-zeroable" velocity bias in Z and Y if you change attitude while translating. I wonder if the impulse bit really is this high in the real Dragon and if docking pilot really only have access to this simple "bang-bang" control.

Also, didn't notice any orbital effects either. For a v-bar approach I would expect there to be a small downward rate when closing on the station. And if you just let Dragon sit at its initial position (assuming that position is displaced along the h-bar axis through ISS center of mass) it should oscillate in Y in sync with the orbit.
Last edited: May 13, 2020
Ibix
Science Advisor
Insights Author

First time, too. Practiced holding y and z down to the ##\pm 0.2\mathrm{m}## tolerance while closing, then decided to hold it to ##\pm 2\mathrm{m}## while closing the range - not wasting reaction mass or wearing myself out. Braked about 10m out and got the y/z tolerances under control, had one bad moment when the green HUD diamond suddenly skated off and vanished, but I think you're just supposed to eyeball it in on the black cross on the docking port at that point.

Nice flight sim, thanks. Never played video games so the controls seem strange without a joystick. Good visuals but I could sure use a raw radar display with closing rates. I'll attempt to dock when I figure out the controls and my hands work.
jackwhirl

I enjoyed this. It's neat how close this was to the sim that the astronauts are using, shown in the video linked at the end.
Anyone else notice the flat earth easter egg in the settings menu?
mfb
Mentor
Insights Author

It's possible to fly through some parts of the ISS. One module I found even had some containers inside, I wonder who put that in the simulation.

By default docking will be done automatically, but with these controls it's really easy.

Orbital mechanics has a timescale of the orbital period, or ~90 minutes, and we start in the same orbit (just ahead of the station) as well. As long as you don't take half an hour for the docking it's negligible.
mfb
Mentor
Insights Author

Found another Easter egg. Turn around at the initial position and then look a bit upwards. 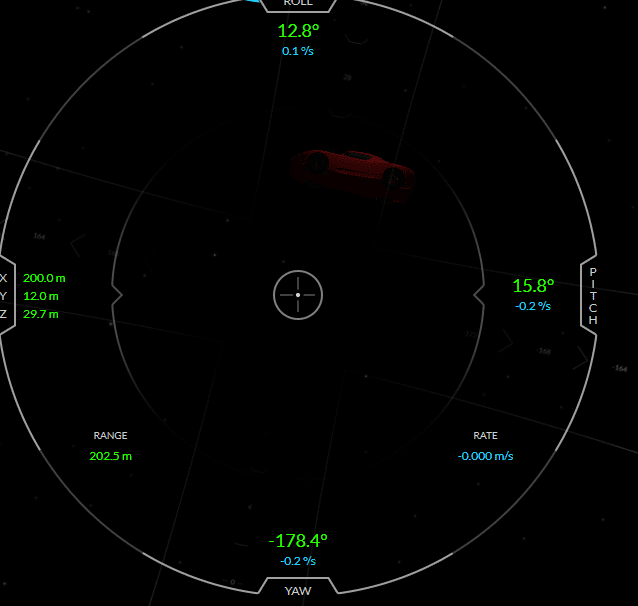 It's pretty close, you can fly to it. If you hit it the simulation claims you collided with the ISS.
Ibix
Science Advisor
Insights Author

mfb said:
Found another Easter egg. Turn around at the initial position and then look a bit upwards.

It's pretty close, you can fly to it. If you hit it the simulation claims you collided with the ISS.

Is that what your avatar is driving?
mfb
Mentor
Insights Author

There are PC dedicated keys with this (are they indicated somewhere by SpaceX?). The left yoke uses QWE and ASD and the right yoke uses <> and the positioning arrows (or the number pad?). Much easier for me.
Log in or register to reply now!

Looks like we've got a Dragon by the tail