Superclusters and their galaxies

TL;DR Summary
Average number of galaxies in a supercluster

I’ve been looking pretty much everywhere on the internet but I can’t find any answer to this question. How many galaxies are in average in a supercluster ? Knowing that laniakea has 47000 galaxies is it considered as a big or a little supercluster?

The number of superclusters in the observable universe is estimated to be 10 million.

There are at least 2 trillion galaxies in the observable universe.

Wikipedia also says Laniakea has 100,000 to 150,000 galaxies. So Laniakea is probably somewhat normal.

The Milky way has eaten multiple galaxies. Andromeda and the Milky Way are going to become Milkomeda in a few billion years.
Antlia 2 galaxy was discovered in 2018. The distance is only a few multiples of the Milky Way's radius. That is a good reason to suspect that the number of galaxies in other superclusters is not counted perfectly. Large parts of Laniakea are blocked by "the zone of avoidance" a dusty swath in the Milky Way.
phinds
Science Advisor
Insights Author
Gold Member
2022 Award 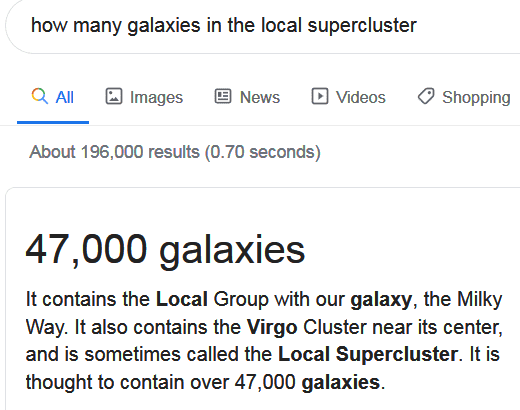 The Virgo Cluster is inside of the Virgo Supercluster which is inside of Laniakea. The Virgo, Hydra, Centaurus, and Pavo-Indus superclusters all got Plutoed.

This video has some nice pictures. Laniakea is a grouping of the galaxies by motion instead of location. If a galaxy is moving more towards Perseus-Pisces it is in that supercluster. If it is moving more toward the great attractor then it is in Laniakea. It is more like a watershed. Northern Ohio has rivers going to both the St-Lawrence and the Mississippi. You might not expect water in the Allegheny river to be in the same system as water in the Bighorn river but both are flowing toward New Orleans.
Share:
Share

Suggested for: Superclusters and their galaxies

I Orbital Velocities and Mass Distribution in Galaxies

I Measuring the rotation curve of galaxies

I Why do galaxies spin?
2

B The configuration of galaxies in space

I MOND from galaxies that are fractal

I Andromeda vs. Milky Way galaxies

B How did Earth get so far away from other galaxies?

B Data needed - Related bodies and their stats

I Apparent distance to far galaxies

B Old galaxies in every direction