Good morning at all,

I have to do one research of the transport of large nuclear reactors, and I need to have an idea of which is the DIAMETER, HEIGHT and WEIGHT of the reactor

I think that there are a lot of different dimension, but i want to know only approximately, because i don't have nothing idea of this!

Thanks alot for the attention, Fabio
Last edited by a moderator: Nov 24, 2017

The size of a reactor depends on the capacity of the plant, the technology selected to convert thermal energy into electrical energy, and the technology in the core and fuel designs. Let's consider a commercial nuclear plant.

In siting a plant, a utility would balance the capacity of a plant with the demands in the system and the design of the electrical grid. In the beginning of the nuclear power industry, the plants were relatively small, of the order of 50 MWe to several hundred MWe. By the mid 1970s, the main designs were about 1000 to 1100 MWe, although some were as large as 1250 MWe. Some plants had built in margin, which has allowed increases in capacity of 5 to 20%. For some modern plants, we've seen capacities between 600 MWe (AP-600) to 1100 MWe (AP-1000), up to 1600 MWe (EPR/US-EPR) for Gen-III+, as well as a new drive to modular units that have capacities in 50 MWe to 300 MWe, which offer smaller plant footprints, and may be sited closer to populated areas.

With the capacity determined, then one looks at the thermodynamic cycle, e.g., Rankine (LWR or CANDU), Brayton (gas turbine), or combined-cycle (Brayton/Rankine). No one has built a combined-cycle NPP.

The core technology depends on the type of fuel and neutron spectrum (moderation), which determines power density, temperature and pressure. Then one has to select the materials for the fuel and core structures that will provide for an economic service, and one must consider the radiation effects and service life of the fuel and core structural systems. Corrosion, and to some extent, erosion, must be minimized, and balanced against temperature, which determines thermodynamic efficiency.

Looking at transport issues, one should look at existing plants, e.g., 17x17 fuel in 193 or 205 assemblies per core, versus a small modular reactor, like NuScales design. It has been pointed out that large nuclear reactors are typically built near water ways (many are coastal) whereby the large components arrive by barge or special ship. Smaller modular reactors offer the possibility of rail, assuming the rail lines and bridges are capable of handling the capacity.

Usually, the pressure vessel containing the core, is transported empty. The fuel is installed after the plant is constructed. Some small modular designs offer the potential to ship the integrated primary system (PV and core) loaded with fuel. This would be challenging since one has to ensure integrity of the control elements.

Since the OP asked about 'large' reactors, then one could consider the AP-1000, APWR, OP-1400, EPR and/or VVER-1200, and perhaps the ABWR/ESBWR. One can search on any of the these designations and find some basic information.
Last edited: Nov 24, 2017
nikkkom
Insights Author

I have to do one research of the transport of large nuclear reactors, and I need to have an idea of which is the DIAMETER, HEIGHT and WEIGHT of the reactor

I think that there are a lot of different dimension, but i want to know only approximately, because i don't have nothing idea of this!

Thanks alot for the attention, Fabio

I read this as "I'm too lazy to google".
Delta Force

Astronuc said:
With the capacity determined, then one looks at the thermodynamic cycle, e.g., Rankine (LWR or CANDU), Brayton (gas turbine), or combined-cycle (Brayton/Rankine). No one has built a combined-cycle NPP.

It seems all advanced nuclear power plant concepts focus on higher temperatures for steam or gas turbines, but I'm unaware of any that propose using a combined cycle. Why aren't there any proposals for combined cycle when it has been extensively used in fossil fuel facilities since the 1990s?
rootone

Nuclear reactors can be made quite small, for example the power supplies that have been used for spacecraft.
A useful transportable nuclear power source isn't really feasible as an anytime power source, (say like a diesel electric generator).
It needs to have quite complicated cooling and control systems as well as the generator itself
Also quite heavy materials are needed as a shell in order to avoid radioactive hazard to the environment,
Last edited: Mar 30, 2018
jim hardy
Science Advisor
Gold Member
Dearly Missed 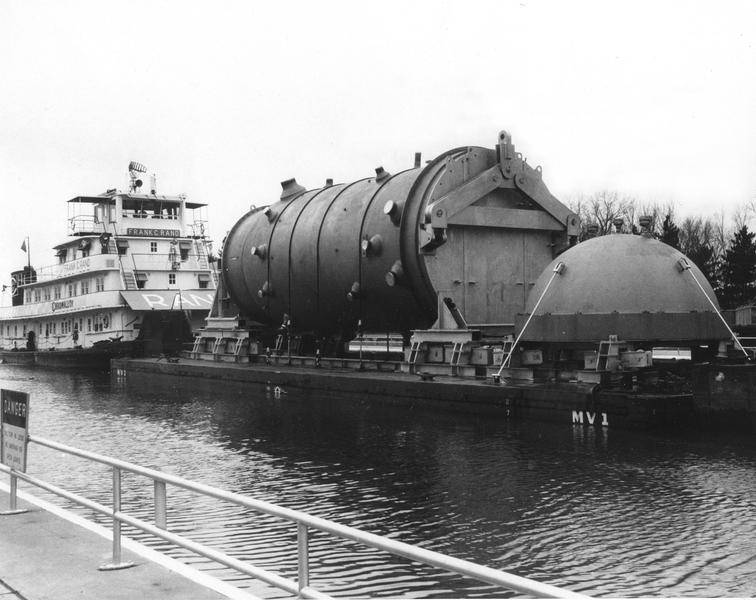 To add some numbers: Cores have a typical power density of 100 MW/m3. For a typical 3 GW of heat this translates to 30 m3 as rough estimate for a modern nuclear power plant. All the remaining infrastructure around it has a much larger volume.
Share:
Share

A
What Is A Nuclear Reactor?

Size Limitation of fuel Bundle in a nuclear reactor