Burnt wire - How to investigate the cause?

I opted for both options.

B. Later simply got another cable from local market that directly has Type D socket at one end and the 3 Pin female that plugs into the actual charger.

With this second option in use, within a few days the wire that I bought from local market burnt near the mains end.

The mains socket is intact as well as the charger is intact and still working fine.

I am concerned that the wire burnt. Now I am investigating why.

Could it be that…

1. The wire drew more current (if so why?) and got overheated or maybe it was not of adequate gauge internally? However charger or laptop is not damaged I suppose

2. Could there be a short inside the wire? But then the mains circuit breaker (Over current protection) in my house should have tripped, but it did not. The wire just kept on melting with fumes and fortunately we were at home then and immediately turned off the mains.

What methods, can I adopt to investigate the cause?

Now with the original manufacturer’s wire (but with adapter) I am not facing any issues at any of the wall sockets in my house. 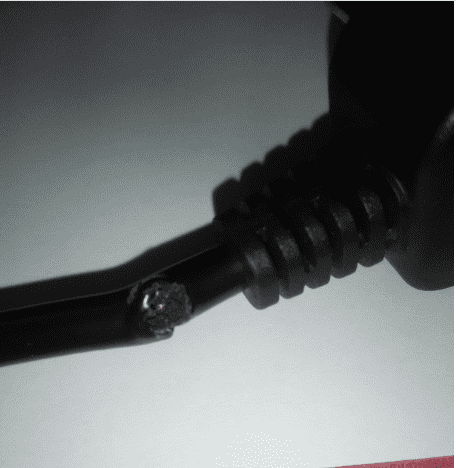 Is there any chance that you used it while the wire was severely bent at that point?
Merlin3189
Homework Helper
Gold Member

ki_2004 said:
2. Could there be a short inside the wire? But then the mains circuit breaker (Over current protection) in my house should have tripped, but it did not. The wire just kept on melting with fumes ...

I don't know what sort of testing is done on mains leads before sale,but a stray strand that was not shorting might be missed, then as Anorlunda suggests, sharp bending of the cable could further damage the insulation and allow contact. The localisation of the heat suggests a local defect like this.

I did have a case when a whole batch of mains leads (supplied with HP laptops) had to be scrapped. Individually they functioned without a problem. But if 3 or 4 were plugged into the same supply circuit, the RCCB tripped. When tested the cables showed an earth leakages of several mA, so that 3 or 4 of them could trip the 30 mA breaker. I never noticed any heating, though some were presumably dissipating 2 W or more. But if this were distributed along the cable, that would not be very much. In your case if the leakage is between live and neutral, the ELCB or RCCB would not be affected and you'd need the much larger current to trip the OCCB. The cable would get extremely hot if that size of current were to flow.
sparkie

I'm going to say here that this cable had some kind of physical defect from manufacturer. For various reasons, utilization/appliance cordsets are often much smaller wire than would typically be required in an electrical install. The stranded copper conductors used in these cables are also much more malleable and thus will stretch more when curled up. That is why you generally have cordsets with paper inside of them to help strengthen the conductors.

As you bend a malleable wire, the resistance at that point increases, which causes there to be a voltage drop across that point. The utilization device requires a certain amount of power, so the amperage will increase. P = IV --> P / V = I --> This shows that the same amount of power at a lower voltages will draw more amperage. This increased amperage is what causes additional heat. This additional heat is what melted your wire. I would say with near certainty that this cable had physical damage prior to use.

Now, let us examine why your circuit breaker did not trip. This kind of thing actually happens quite often. Given the varying levels of power drawn by utilization devices, it is common practice (at least in the US) to run, for instance, a 15A receptacle on a circuit sized for 20A. The idea behind this is twofold. The first being that the receptacle is using a NEMA-15 configuration, meaning that any devices that can potentially draw above 15A under normal operating conditions will use a NEMA-20 configuration, which will not fit into a NEMA-15 receptacle. This prevents a device that draws 20A from being powered by a 15A circuit. See images below: 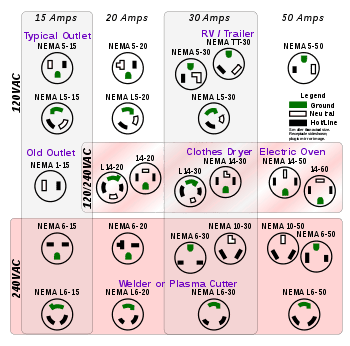 Utilization devices will often have their cordsets designed to the absolute minimum specification based on device-specfic calculations rather than electrical standards because of a) cost and b) the manufacturer accepts liability. This handles the device amperage draw. Now lets get into short circuit conditions. Often times, wiring can handle direct short circuit conditions in excess of the breakers rating. For instance, 14AWG wire, used for a 15A circuit, can easily handle the instantaneous (or near instantaneous) current of over 20A that it takes to trip a 20A breaker. This is the other reason this type of sizing is allowed in the current American code. The overload condition is prevented by utilization device physical design, and the short circuit condition is met due to the wire being able to handle instantaneous currents of 20A for the next size up.

The reason I go through this explanation, is because there is an outlier in this method of doing things. An outlier I have seen MANY times, and one that starts fires. This also relates to why your circuit breaker did not trip. Suppose you take a NEMA-15 receptacle on a 20A circuit and plug multiple utilization devices into it, whose loads sum to a total at around 18-20. This is not enough to burn up the wire, it is not enough to cause the circuit breaker to trip, and each branch of this circuit has appliance cordsets that can handle their draw. The weak point is going to be the contacts in the receptacle. The receptacle will end up catching fire if the load is uninterrupted due to the heat from the current and the circuit breaker will often not shut the circuit off, as usually the device burns up and opens the circuit long before the plastic melts and causes a short to ground.

This is what happened with your cord. The weakest point of the circuit fails. For whatever reason, this cord was physically damaged and/or made of sub-par materials. The first thing to do is compare the current rating on the cordset you purchased to the input amp rating on the charger and see if one exceeds the other.

You will then want to carefully cut out the damaged section, dissect it, and make observations as to any potential causes. Melted/broken strands. Then you would want to compare the width of each individual strand from an undamaged section of wire to the width of each strand very close to this section of cable. Count each strand to determine the wire size, which can then be used to determine the size of the wire in total, which then can be used to determine the ampacity of the cable. Differences in the wire size/ampacity near the burned up section compared to a "good" section can also help locate physical defect. Generally, even by manufacturers, this kind of analysis is done visually (even on damaged sections of medium voltage switchgear components) before material composition testing is done.

sparkie said:
Utilization devices will often have their cordsets designed to the absolute minimum specification based on device-specfic calculations rather than electrical standards

because the manufacturer is in another country where it would be impossible to find in the event of a disaster caused by the cord.

There either needs to be a fuse in the plug or it needs large enough wire to trip the breaker in the case of a short in the appliance. That is why if you get one of those novelty lighted figurines with a 1/2W LED in them you will still find an 18 gauge wire attached (or a fuse in the plug).

rbelli1 said:
because the manufacturer is in another country where it would be impossible to find in the event of a disaster caused by the cord.
BoB

I do agree with you, that if stepping down to a smaller wire size, there needs to be additional protection, however, in practice, this almost never happens. Take the cabling commonly used for a PC/monitor power supply cord. These things are almost always 16-18. Look at your alarm clock's cord. Your blender. Nearly every appliance that draws less than 15A doesn't have any kind of secondary circuit protection. To top that off, even if the fuse is located in the device, a partial short in the cordset can still start a fire. The simple truth is, that in practice, that approach is not always followed. In the OP's case, I would simply suggest he invest in a high quality cord next time. Sometimes we all get burned on cheap cables. Fortunately, in the area of phone/laptop chargers the cord will usually burn up and open the circuit before anything major happens, often times without even damaging the sheathing.
jim hardy
Science Advisor
Gold Member
Dearly Missed

ki_2004 said:
With this second option in use, within a few days the wire that I bought from local market burnt near the mains end.

at 400% it becomes unclear just what i'm seeing. 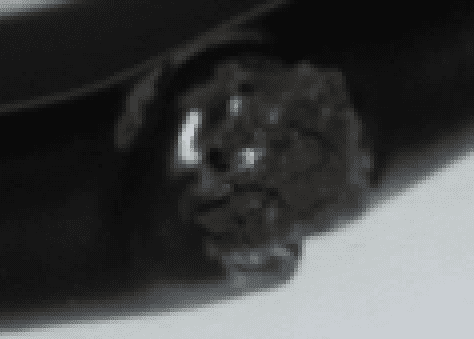 is that bare copper in there ? and white insulation ?
Might something have chewed the wire?
When i was about nine years old my pet rabbit nibbled an alarm clock cord, quickly dropped it and hopped away. He'd exposed copper but i dont know whether it was hot or neutral he got into.

@sparkie had good advice - 'forensic' examination, with a magnifying glass.

Suggested for: Burnt wire - How to investigate the cause?

Burnt Wire When Switch On

Muddle color bands on burnt resistor, how to determine value?

How to determine the ground wire

How to choose the correct wire gauge & size of a wire

How to estimate the heating of a wire

How to wire this properly?

How to exactly calculate the required wire diameter?

How to wire the contactor just to switch on and off