The force shown in the force-time diagram acts on a 538 g object. Find the final velocity of the object if it is initially at rest. Answer in m/s. 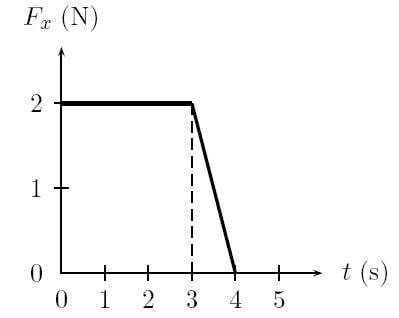 I correctly found the impulse by determining the area underneath the curve. It's 7 N s. I know that we can determine the final velocity by using this equation: I=m∆v. I also saw a topic somewhere on this site where someone suggested the same formula. I used this formula and I get the wrong answer.
7 = .583(vf - 0) vf = 13.011m/s
I also tried inputting -13.011m/s and that was also incorrect. I don't know where I'm going wrong.

Hmm, I can't see what you've done wrong. I get the exact same answer !!
Gale

so you get 7=.583vf? then you just divide and get 12.0007 right? or am i missing something. at any rate. is this an online problem? because if it tells you to give velocity in m/s you don't have to write the units in your submitted answer... usually. did you try that?
AdnamaLeigh

My dyslexia always seems to kick in at the worst moments. I got it. Thanks guys.
Log in or register to reply now!

Using Impulse to Solve For the Final Velocity

Magnitude of velocity and impulse