I wanted to ask one question. My friend has a physics exam at school were the topic is to come up with a interesting yet simple physical device that would prove a single or multiple physics concepts.
Now we were thinking that it would be interesting to experiment with the action-reaction idea. Also we wanted to device to incorporate possibly other means of ideas like relativity.

And so I came up with the idea of a rotating toroidal pipe/transformer which would have a coil much line an ordinary transformer but instead of having a laminated iron core it would have an empty core with liquid metal in it.

The whole idea should work like this, we have a rotor and slip rings, we supply some DC current through the slip rings to the rotor, the current goes into the toroidal coil wrapped around our empty torus, the torus pipe itself would have to be made of some insulating material and then I assume contacts should be put through so that the liquid metal inside the torus could touch them and conduct electricity, as it would conduct being situated in a uniform magnetic field it would then move and the whole assembly should work similarly to a magnetohydrodynamic pump.

The main idea is that (given the DC polarity is set right) the liquid metal (probably mercury) should flow in one direction while the rotor is turned in the other, in other words lets assume the rotor spins with 100rpm, given enough current the liquid mercury would flow in the torus the other way and carefully matching the speeds we could make the mercury stand still inside the torus even though the torus itself would be rotating, right?

the question is, is this possible, one factor is that I don't want alot of mercury inside the torus but only a little bit so that it would be visibly clear at which point the mercury is at any given moment, since mercury is liquid I assume it would want to spread out, how would I contain it more or less at one spot , would I need to pressurize the rest of the torus with some noble gas in order for the mercury to stay together?

Any help is appreciated, thanks.
Last edited by a moderator: Oct 9, 2018

I don't think the mercury will flow around the torus.

If I have understood your description correctly the field in the toroid will be pointing around it like this... 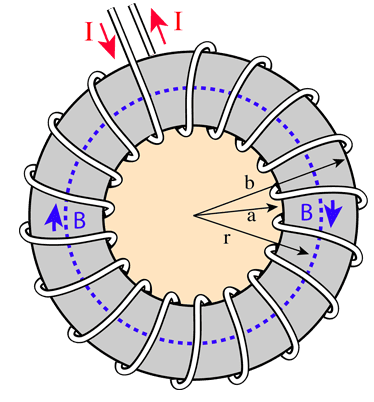 You can use Fleming's left hand rule to work out the direction of motion (Image from https://en.wikipedia.org/wiki/Fleming's_left-hand_rule_for_motors).. 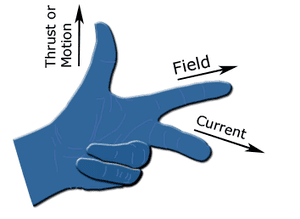 It shows that the "thrust of motion" is always at right angles to the magnetic field, not parallel to it.

PS: You can fix this problem by using a different coil arrangement or using permanent magnets. However it also has implications for the direction of the current and how you get the current to flow in the mercury in that direction.
Last edited: Oct 11, 2018
CWatters
Science Advisor
Homework Helper
Gold Member

However there is another issue...


girts said:
The main idea is that (given the DC polarity is set right) the liquid metal (probably mercury) should flow in one direction while the rotor is turned in the other,

The torque will be equal and opposite but what about other forces such as friction? If there is any difference in the friction acting on the torus compared to the mercury one or the other will slow down and stop leaving the other rotating. It would be very difficult to match them exactly.
girts

Ok I see , I mixed up the force directions, so a toroidal magnetic field would not work for my case.
maybe let's unroll the torus and speak about it as a linear tube as that would be easier and it changes nothing.
for sake of simplicity lets assume the tube is not round but rectangular in that case the b field should point from one side to other side either horizontally or vertically and then the other two sides should have current contacts the mercury can touch as it flows by and the current going through the mercury and the b field being perpendicular to that current would then make the mercury flow either one or the other direction, right?

Well I did not say I need the mercury to exactly stand still while the torus is rotating a minor speed difference is okay as long as it can be seen by the eye.
I wonder what shape of coils I could use in order to achieve such a b field shape in my torus , well the torus also doesn't have to be circular in shape it can be rectangular as long as it makes a symmetrical circle and can be spun on a rotor
Share:
Share

A
Idea for graphics programming project?

I need an idea for a project

J
Ideas for this fun project?