Plasma current direction in the presence of an external field

A simple question,
I read that the particles in a plasma (protons , electrons) travel along the B field lines in a plasma which I know and they loop around the field lines each in opposite direction (clockwise, anticlockwise ) but both in the same direction.

My question then is this. If I have a straight evacuated tube in which a gas mixture is inserted, on the outside of the tube I have a solenoid (wires wound around much like on a solenoid core) now I apply a DC current to the coil and (by some means) turn the gas into a plasma state. So through the plasma filled tube I have B field lines from my outer DC coil, the particles inside the tube follow those lines, does my DC coil current and the resulting plasma current are in the same direction then? 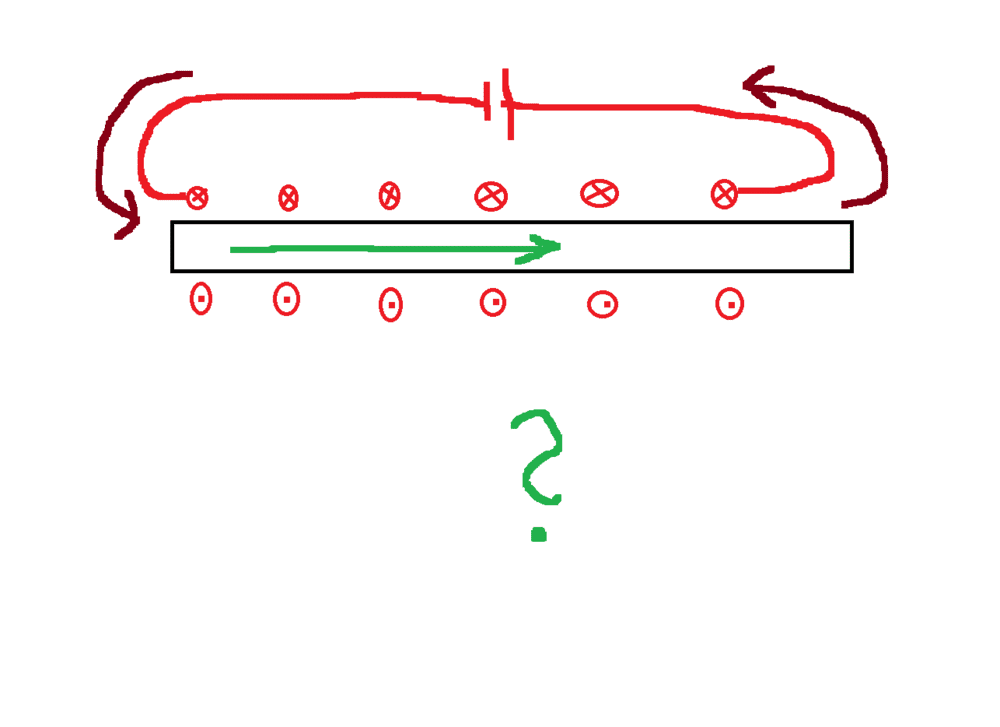 The green arrow shows the (supposed direction of ) the plasma current while the drown one shows the direction of my DC current.
I hope I explained my question clearly
Last edited by a moderator: Oct 4, 2019

So can anyone comment on this scenario ?
DaveE
Gold Member

Well I was originally implying he scenario as if the tube had no sealed ends instead you could either imagine the tube to be a small fragment from an endless cylinder filled with plasma and surrounded by a coil, or part of a torus like that of a tokamak having the toroidal coil which is my represented coil essentially. This is more of a though experiment for me to understand instead of a real closed end tube so treat the tube as with open ends, in that case both electrons and protons would be flowing in the same direction just in opposite circles around field lines right?
DaveE
Gold Member

artis said:
electrons and protons would be flowing in the same direction

Not if there is an E-field present.
artis

I agree but that is why I mentioned that in my example there isn't any E field , the sketched cylinder is supposed to be much like a straightened out part of a tokamak torus, the DC current in the solenoid is indeed looping around but eventually the current in the coil has a direction.

right I messed up , if oppositely charged particles travel in the same direction at the same speed then there is zero net current, but if they travel at different speeds then there would be net current I suppose.

But then again the same is true for oppositely charged particles traveling in opposite directions, then there should also be zero net current ?
Log in or register to reply now!

I Calculating fields in the presence of insulators

Energy flow in presence of electric and magnetic field

I Potential energy in the presence of two fields

B Potential energy of a dipole in an external field

B How is current induced in the plasma in a tokamak?

Can plasma create current in an inductor?

The effect of an external electric field on water

Dissolved ion distribution under the influence of an external electric field