Rotation of Rigid Bodies: Rotating stick with disc on top 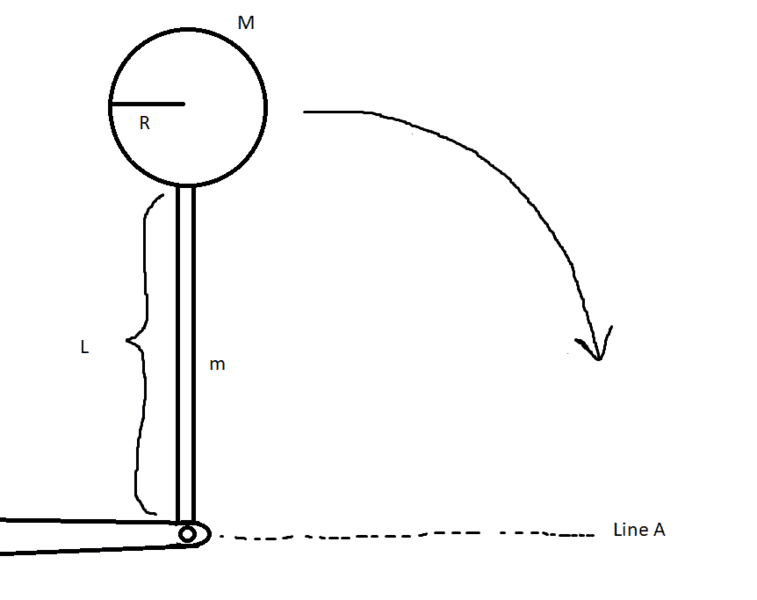 [/B]
A thin cylindrical rod with the length of L = 24.0 cm and the mass m = 1.20 kg has a cylindrical disc attached to the other end as shown by the figure. The cylindrical disc has the radius R = 8.00 cm and the mass M 2.00 kg. The arrangement is originally straight up vertical), but it can fall and rotate around a frictionless axis. What is the arrangement's kinetic energy when it has rotated 90 degrees and is momentarily horizontal? What is the angular velocity and what is the velocity of the discs center of mass in this location? Compare this with what the velocity of the disc would have if the disc passed the line A if you had only dropped the disc straight down (without the rod).

Pretty much stuck at the first part: Calculating the kinetic energy of the system when it reaches line A.

The kinetic energy for a rotating rigid body is K = 1/2*mv^2 + 1/2*Iw^2, this becomes K2 = 1/2*Iw^2 (remove 1/2*mv^2 because there is no movement for this rigid body, only rotation). Here, I is the inertia of the entire system, which is the inertia of the rod (1/3*mL^2) plus the discs inertia. Now this is another problem. There is no formula for inertia for a disc spinning about an axis on its "edge". Maybe we could derive one with calculus, but that would be taking it too far... At one point i considered the disc as a single point meaning we could just use the general inertia formula m*r^2 for it, but that would also be going too far because a radius was given, it's clearly not meant to be just a point.

with this i could solve the angular velocity w and then easily find the kinetic energy K2, but i have no idea what the potential energy for the rod is and inertia for the disc...


Exath said:
Not really sure how potential energy works for a rod rotating about an axis on one of its ends though.

Just like the disk. What happens to the center of mass of the rod?
Doc Al
Mentor

Exath said:
There is no formula for inertia for a disc spinning about an axis on its "edge".

It also falls like the disk, but counting from the center of mass it would be m*g*(L/2)?
Doc Al
Mentor

Exath said:
It also falls like the disk, but counting from the center of mass it would be m*g*(L/2)?

Ok, so what's left is the inertia for the disk, how would i go about finding that?
Doc Al
Mentor

Exath said:
Ok, so what's left is the inertia for the disk, how would i go about finding that?

Related Threads on Rotation of Rigid Bodies: Rotating stick with disc on top

A
Rotation of Rigid bodies