Good evening people. Recently I started taking the "electric network analysis" course in my school. We already saw the mesh analysis method for solving circuits. Now we are seeing the node analysis method. I understand that the first step for this method is finding the number of nodes (and one of them being the reference node which will be the ground node). According to my teacher there are three types of analyses in the node analysis method which are the following:
According to him: real nodes consist of nodes being connected to current sources or not being connected to a source but belonging to an electrical network. "Ghost" nodes are just nodes that are connected to voltage sources. And supernodes occur when a voltage source is connected to two neighboring nodes. For a more detailed description of what he means real nodes are the following images:
THIS IS A REAL NODE

THIS IS A "GHOST" NODE

THIS IS A SUPERNODE

I added the images so I hope that there's no confusion. Ok moving on the algorithm to solve an electrical network using this method as I saw in Boylestad introductory circuit analysis book was:
STEP 1. Find the number of nodes in the circuit
Ok so let's assume that I'm working on the real nodes. Some photos I have seen work with all the forming nodes in the circuit (excepting those ones at the "level" of the ground node since they are all at 0V). 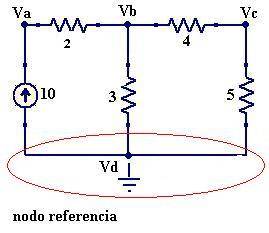 But, I also have seen that only choose some nodes like in this photo 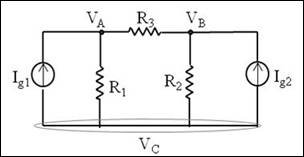 The most notorious difference I see here is that on the upper photo they have three nodes (including the corners) but the ones on the photo on below only includes those ones that are not in the corners) So that's my main confusion I'm having on choosing the number of nodes for solving this.

STEP 2. Choosing a ground node reference (I have no doubt on this, because normally it's the node that intersects with the most branches)
STEP 3. Using the KCL for each node (This is another doubt I'm having but I'll post about this on another thread later).
STEP 4. Use linear equations systems for finding node voltages.

I would really like to know which convention to use, since my teacher uses kinds of "recipes" or "rules of thumb" for using this real, ghost and supernode classification. However, I would like to use this method in a general manner. Thanks.
Last edited by a moderator: Apr 18, 2017

The ground node, in how circuits are usually drawn, is usually at the negative terminal of some kind of "main" volrage source, for simplicity.

As far as figuring out how many nodes there are: don't think of nodes as corners of the graph or where two wires meet or something like that.

A node is a spot that has the same voltage throughout. In lumped element circuits like these, there is no voltage drop unless there's an element present (moving along a wire, there is no voltage drop unless you come across a circuit element). So, any section of connected wire you see that isn't interrupted by a circuit element is a node.
Log in or register to reply now!