In "An Introduction to Thermal Physics" Schroeder goes to deduce that for any quasi-static process: W = -PdV (p.21), and then on page 112, with the help of dE = Q + W (= first law of Td.) and dE = TdS - PdV (= the Td. identity), he deduces that Q = TdS for ALL quasi-static processes (reversibility is not a prerequisite).

In class we saw that Q = TdS implies reversibility, but I assume this is wrong, then, because Q = TdS already follows out of "regular" happening quasi-statically and on p.82 Schroeder notes: "A quasistatic process can still be irreversible, however, if there is also heat flowing in or out or if entropy is being created in some other way."

What is an example, then, of a quasistatic, irreversible process? My professor argumented you could let the free (adiabatic) expansion of a gas (i.e. letting a gas freely expand into vacuum in an isolated container (from e.g. half the container volume), so Q = 0 and dE = 0 and W = 0 [see incl. picture for clarity]) happen quasistatically by building brick wall after brick wall (seperating the gas from the vacuum), pulling away each wall after another, letting the gas expand infinitesimally further each go. According to Schroeder, however, this is clearly not quasistatic since W (= 0) does not equal PdV (clearly not zero). Furthermore, if it were quasistatic, then Q = TdS and since Q = 0, the adiabatic expansion would be reversible. 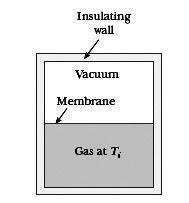 On wikipedia it gave the following example of an irreversible, quasistatic process:

So what is the deal? AKA what is an irreversible, quasistatic process (so where Q = TdSsystem yet dSuniverse > 0)

I had a look at "H. A. Buchdahl, The concepts of classical thermodynamics, cambridge u p, 1966" which has been re-edited in 2009. It is a very careful book on axiomatic thermodynamics. Buchdahl shows, that every quasi-static process is reversible.
However, I think that different people use different notions of "quasi-static", e.g. in the sense that the system is only locally in equilibrium; for the latter definitions, this may not hold.
nonequilibrium

Hm, interesting. Would you recommend me to buy the book? An axiomatic treatment of the subject seems VERY appealing, but the thing stopping me is that it purely looks at classical thermodynamics, while I believe the statistical treatment is essential for a grasp of the material.

Could you possibly look how the book defines "quasi-static"? Its result that it automatically implies reversibility, is very interesting.
DrDu
Science Advisor

Personally, I think that you have to understand first phenomenological thermodynamics to appreciate statistical thermodynamics. The book by Buchdahl is nevertheless a text book and doesn't get lost in formalism. So it is probably a good buy. But maybe you can find it in the library?
nonequilibrium

Suggested for: Schroeder on thermodynamical reversibility, entropy and quasi-static equilibrium

Quasi-static and reversible processes in thermodynamics