My question is, what am I looking for to find the point loads in a shear force diagram?

My question is, what am I looking for to find the point loads in a shear force diagram?

I assume you are looking at point loading along the length of a beam. How does the shear force change from one side of the point load to the other? Do you have any examples of shear force diagrams in your textbook involving point loads?
Sl1ver

my textbook doesn't realy look at it. i've googled but haven't found much.

here is an example

Im just not too sure what exactly to look for to determine where a point is.
Chestermiller
Mentor
Insights Author

here is the diagram 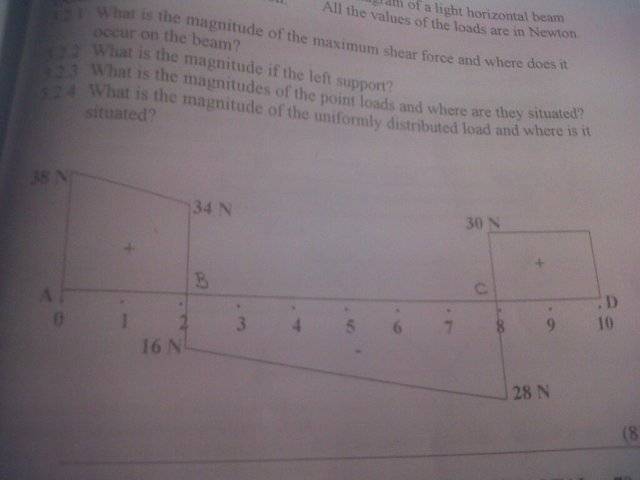 Let me guess. The point loads are at points A, B, C, and D. From what you see on the graph, what is the key characteristic of the shear force variation at these locations?

A. It varies continuously
or
B. It undergoes a jump change discontinuity
Sl1ver

I would go with B on your question.
Chestermiller
Mentor
Insights Author

Sl1ver said:
I would go with B on your question.

Right. Now how are these jump changes in shear force related to the point loads? Hint: see my first reply.
Sl1ver

To be honest im not too sure.
Chestermiller
Mentor
Insights Author

Imagine that you cut out a small section of the beam on either side of one of the point loads, and replace the internal loading that was present on the two faces of the section with a tensile force, a moment, and a shear force. This tensile force, moment, and shear force are equal to the corresponding quantities within the loaded beam before the cut was made. Now treat the cut-out section as a free body, and perform an equilibrium force balance on the section in the vertical direction. From this equilibrium force balance, you should be able to determine the jump change in the shear force from one side of the section to the other.
Share:
Share

Drawing a shear force diagram with loads working at an angle

Can a shear force diagram be a function of applied load P?

How to find shear force