I have a MATLAB script for modelling a two tone signal (a sum of two sinusoids) going through a non linear transfer function (such as an amplifier). The amplitude of a signal is amplified non linearly, and also the phase is modified depending on the input power of the signal.

With just amplitude modulation, the output spectrum looks as expected (first two plots) Its non linear so 3rd order and fifth order intermods can be seen around the frequency of the two sinusoids, as well as harmonics. I know the amplitude modulation is correct because I obtain the correct third order intercept for the amplifier model. Upper graphs are in volts, lower graphs in dB Watts 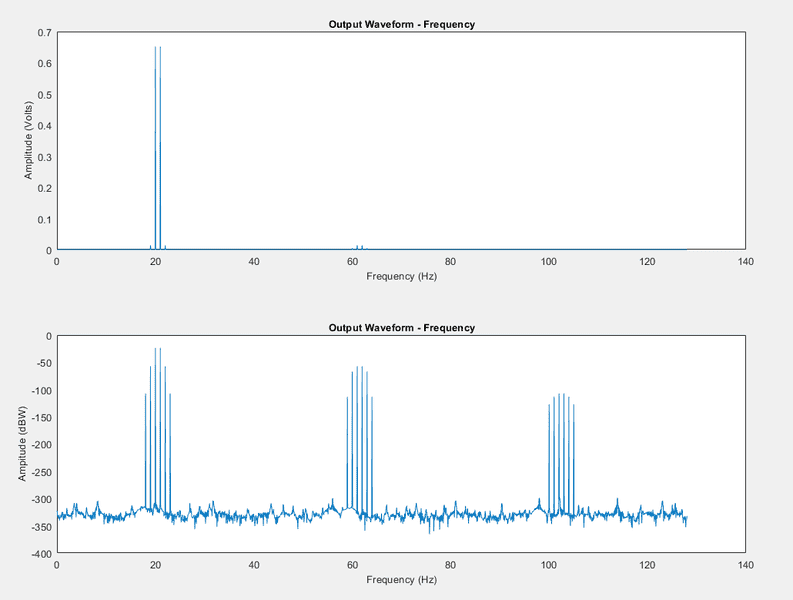 However, when phase is adjusted depending on the input signal power, the spectrum looks like this... and my fifth order intermods are lost (again upper graph in volts, lower graph in dBW) 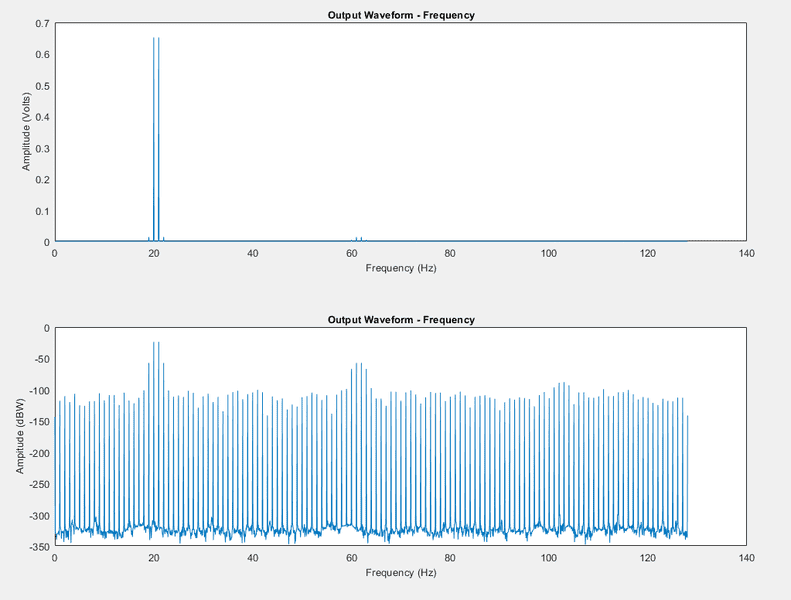 How its coded --> My script looks at each point on the input signal, reads its amplitude and adds a phase adjustment to it during reconstruction of the signal, as shown in the phase transfer plot below (which shows the effect the equipment will have on any signal going through it). So if the amplitude (input power) of the signal is -70 dBW then a phase of 0.01 radians is added to the reconstructed signal at that exact point... then it looks at the next sample point and adds a phase to that. So if the amplitude of the wave is at -70dBW then the reconstructed waveform is cos(2*pi*f + 0.01)

Confident I have not made any mistakes with unit conversion (again because third order intercept is correct).

If I understand correctly, for the first case there is amplitude modulation and for the second case phase modulation.
For phase modulation, the envelope remains constant, and it can therefore be passed through non linear systems without creating additional side frequencies.
sophiecentaur
Science Advisor
Gold Member

tech99 said:
If I understand correctly, for the first case there is amplitude modulation and for the second case phase modulation.
For phase modulation, the envelope remains constant, and it can therefore be passed through non linear systems without creating additional side frequencies.

That's how I read it. Unfortunately the description of the process is not totally clear (or at least it isn't described in terms recognisable to me`).
@Natalie Johnson I don't understand how you seem to be associating two tone amplification with amplitude modulation. AM is a very specific form of modulation and there is one carrier plus sidebands.
Could you give us some context for these calculations please? Are you just trying to produce a signal that is more impervious to nonlinearity? Is this basically a form of pre-correction?
Share:
Share