On the topic of structural tubing...

Does it necessarily follow that the best possible use of material when making a tube, is to use it all for round tube wall thickness? Or, is it possible I could make a stronger tube of the same weight by using a thinner walled round tube and inscribing a square tube inside it?

One thought experiment is to imagine that I have 3 different tubes. Tube 1 will be a round outer tube, tube 2 will be a round tube which fits snugly inside tube 1, tube 3 will be a square tube which fits snugly inside tube 1. I'm going to make a composite tube by sliding either tube 2 or tube 3, inside tube 1. All 3 tubes have the same weight per unit length.
I really have 2 options in this scenario for a composite tube, 1+2 or 1+3. If the strength of the composite tube is simply the sum of the strengths of the individual tubes, then 1+2 would be stronger because 2 is stronger than 3 and 1 would be the same in both cases. If the strength of the composite is not a simple sum, then it is possible 1+3 may be stronger. It's easy to imagine the straight edges of the square tube acting like internal bracing for the round tube, so I really have no idea which combination would be stronger.
Also: this thought experiment assumes that composite 1+2 would be equivalent to a single round tube of equivalent wall thickness. I don't know if that is true or not.

Further ponderings: What about other internal structures? Suppose I could find a triangular tube to inscribe into my round tube? Or perhaps I could pack my round tube with hollow spheres? Could the answer depend on exactly what type of forces I want the finished tube to resist (bending, denting, stretching, compression, torsion, etc)?

I'm not at all sure if I've explained my question well. I'll clarify if need be.

It seems that many of your questions could be answered by looking up the specifications of structural tubes of various sides and shapes for sale online.
mrspeedybob

That only works if the strengths of the inner and outer tubes add up simply. I don't know if they do or not, but I seriously doubt it.

Sure, I can find the strength of a round tube and the strength of a square tube that would fit inside it, but I really doubt the total strength of the 2 put together would be a simple sum of their individual strengths. One example of this... Flat ribbons of steel are not very strong, but if I weld 3 of them together into a triangular tube the result is much more than 3x stronger than the individual ribbons. I would expect the same sort of synergistic effect by adding internal structure to a tube, but I have not tested that expectation. I'm sure someone has, but I haven't been able to find it.
jrmichler
Mentor

If loaded in pure tension, the internal construction does not matter, except as it affects the end attachments.

If loaded in compression, and if the dimensions and material properties cause the failure mode to be buckling, then the internal design has a huge effect on the strength (buckling load). Same for bending. Search aircraft structural design or aircraft structures for more information.

If loaded in bending, and the failure mode is not buckling, then your design is weaker than a simple tube of the same weight per length.

A good book is Aircraft Structures by David Peery. There are other books out there, but this one covers your question, and much more.
Baluncore
Science Advisor
2021 Award

If you want to prevent bending under compression you must move material away from the neutral axis. That means you should use a thin walled cylindrical tube without internal structure.

You may benefit by going for a larger diameter skeletal tube with holes in the tube wall. Extending that concept takes it to become a lattice column. The lattice column could be made from structural tube.

You should also consider hollow spindle shaped elements, (like cart wheel spokes), that have a greater diameter in the middle than at the ends, but with the same area of wall material per unit length along the tube.
DaveC426913
Gold Member

Baluncore said:
You should also consider hollow spindle shaped elements, (like cart wheel spokes), that have a greater diameter in the middle than at the ends, but with the same area of wall material per unit length along the tube.

Or carry that one step further, eliminating most of the spindle material.

Structurally, these "grain legs" are spindles, but they use guy wires held by spanners. 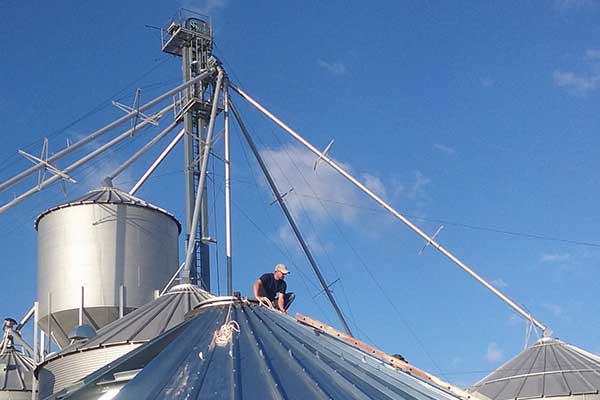 Some 40 years ago when I was at school a metalwork teacher demonstrated that round tubes were stronger simply by making paper "tubes" with 3, 4, 8 sides and one circular and then putting books on top. With care such a simple experiment works. Perhaps try it with your composite tube. Video on YouTube please.
Baluncore
Science Advisor
2021 Award

The design of structural tubing such as Rolled Hollow Section is quite different to a pipe that must withstand internal pressure. Internal pressure causes twice the hoop stress as longitudinal stress. That is one reason why a welded seam pipe tends to split length-ways, along the Heat Affected Zone of the welded seam.

The spiral welding of a long strip of sheet material into a tube leaves a spiral seam that is thicker than the pipe wall. That eliminates the longitudinal weld and so makes the pipe significantly stronger in hoop stress. A tight spiral weld also prevents a dent in the tube from propagating along the straight line surface of the tube, which would otherwise lead to buckling of a column or strut. The thick seam tends to keep the tube section round, which prevents collapse when the tube is subjected to an internal vacuum or external fluid pressure.

A thin walled tube can be filled with concrete to support a greater structural compressive load. But then the tube is employed to prevent spalling of the concrete when subjected to an axial seismic shock. That appears to be a good application for spiral welded tube.

Internal structure is rarely needed in a round tube. An elliptical tube cannot be used when directional rotation is needed. I use a single flat web in a tube subjected to a bending force in a consistent direction. Such an application is in the round bottom tube of a lifting arm on the tray of a utility vehicle. The web is there to prevent collapse of the tube face, at the top of the socket tube in the tray. It seems to work, but as it is a preventative measure, I have never needed to analyse the situation. It reduces failure by increasing strength, while transferring the point of failure to components that are easier to repair.

There may also be applications for internal structure where round tubes meet at joints in structures such as in bicycle frames. Are there any situations where internal structure is actually recommended by a design code ?
Rive
Science Advisor

Since the problem brought up in the topic seemed to be interesting I decided to give it some google. I found two questions.
- Is it worth to make an internal structure for a purpose instead of just more thickness for the walls or more tubes or any alternate solution? Internal structures are not cheap. They seems to be a living topic (for example: http://www.scielo.br/scielo.php?script=sci_arttext&pid=S1679-78252017000701293), but rare bird.
- What kind of 'strength' is it about?
256bits
Gold Member

DaveC426913 said:
Or carry that one step further, eliminating most of the spindle material.

Structurally, these "grain legs" are spindles, but they use guy wires held by spanners.View attachment 226766

Your picture made me think of a few things about tubing.

Notice the bin on the bottom left, where corrugated ( galvanized ) curved steel is used for the structure holding the grain.
The "curved ribs" should be increasing the allowable hoop load over that from plane flat curved steel sheets.
In addition, overlap at the bolted joints adds another load boost.
( It would be the same as if the bin was made out of plywood, and rings of steel were added to increase the structural strength from bursting the wood. )
Here we have a boost of the allowable load just from the assembly method.

Pipes of corrugated metal can also withstand exterior pressure forces better than non, such as for culverts stressed under a soil load beneath roadways.

Also, when one wants flexible, corrugated round tubing is the way to go - an example is the bendable plastic straw, which besides being bendable, can also be lengthened ( shortened ) at will. Some pouring spouts utilize this feature for compact storage, along with the bending. While maybe not a strengthening of the tube per se, this does have advantages over the cumbersome telescoping method and the flexible metal tubing method of manufacture.

One strengthening technique for hoses subjected to a negative pressure within is to wrap the hose externally with wire, preventing a collapse of the hose.
One might see that on a rubber radiator hose, at east in the olden days.
One could go on about the strengthening methods used in the manufacture of pressure hoses, that render them flexible yet strong.
Baluncore
Science Advisor
2021 Award

Rive said:
- What kind of 'strength' is it about?

That paper shows a collapsing tube being used to absorb energy. The progressive collapse moves along the tube without buckling, which maintains the same crushing force over the full length of the collapse.

A similar thing is done when a heavy component must be stopped gently if it runs away. A slab of honeycomb aluminium is progressively crushed axially to absorb the energy over the length and time period required. A honeycomb is not a tube modified with an internal structure so much as many fine tubes being crushed from one end in parallel.

Extruded aluminium is available with internal structure. Deck plates for aluminium ship construction have two faces separated by webs to make a rectangular boxwork. That is done to minimise welding and speed fabrication, not to make a stronger tube.

So, still no real reason found to use an internal structure.
jrmichler
Mentor

The combination of thin wall tube with stiffeners is much lighter than a thick wall tube of the same compressive strength. 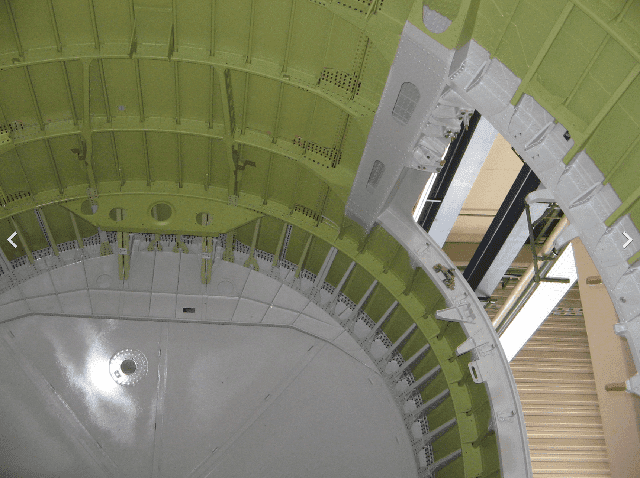 Which piece is stronger?

Which beam is stronger?

Which is a stronger mechanical connection