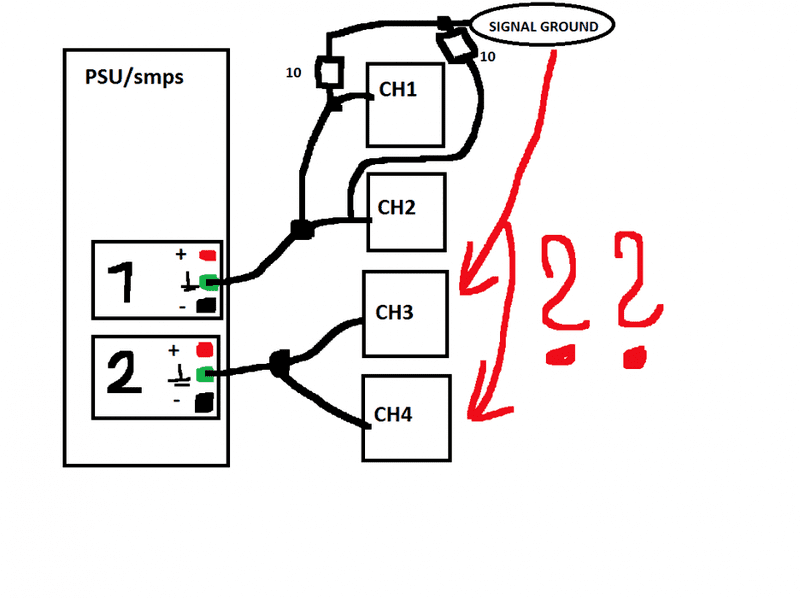 Hi folks , maybe you can help me out , so i've built a powerful smps with two separate transformers and secondaries being driven by one common two IGBT half bridge topology.
I have also put 4x500w rms amplifier channels into the box , they are not kit's they are basically discrete component made boards after a well known schematic.

Now since i have two separate transformers measuring with a multimeter from one secondary ground across the other i get about 80v DC which is normal because the transformers are not perfectly identical ,
The question then is what should I do with the input signal grounds ? If I simply connect the signal ground to all 4 channels and on each channel a 10ohm resistor to the actual ground then I will get huge currents running from the first two channels to the second two channel grounds and that will be definitely bad.
Should I simply take away the resistors and leave the input grounds connected to the psu ground only via a capacitor?

P.S. I originally put the 10ohm resistor to stop any ground currents in the signal ground because using only a capacitor resulted in some HUM.
I have also done this in one other amplifier I have built before but that ahd only two channels yet each channel had a separate mains transformer psu yet I too lifted the signal ground to the psu ground via the 10ohm resistor , never measured voltages but it works just fine.

Oh and one other question , when I assembled my smps for the second time I used a choke in the input for high frequency noise supression back into the mains.I have taken that pasrt from another big commercial smps , but when I load tested my smps i went above 1KW , probably 1.5kw and the inductor got hot and the varnish burned off , I have some thick copper enamel wire I could wrap my own heavy duty choke but i don't know how much turns of wire I need to make it effective ? I assume it doesnt have to be that specific but some overall value that I could use maybe?

as one of the members on PF wrote to me in PM , he would like to know the schematics of the smps itself to say more , so I will post the schematics and our discussion here just in case.


Could you post any schematics? Particularly the smps. (I think you said you built them.)
I don't understand your "80V difference between grounds is normal". I'd have thought, if these are from separate windings, you could just tie them (the grounds) together.
I'd agree, if they are floating, you can get a random voltage difference when tested with a high impedance meter, but I would not expect a constant value and I would not expect any current. What is the rest of the current path if you tie the grounds together? Have you tried tying them through a resistor, say a few k, and measuring the voltage then?


thanks for the interest, well since they are both secondary windings they are floating with respect to each other.
I haven't actually thought about tying them together.
but both transformer primaries are powered from a single half bridge two IGBT set so maybe each transformers primary kind of goes 180 degrees out of phase , also each transformers core is a bit different material , i'm not sure how much of a role this plays into the equation.

Looking at the schematic, I can't see how there can be a potential between the different grounds. I think they should all be connected to the same conductor.
If they are all separate local grounds, then I can't see how any DC current can flow between them. If you are getting 60mA DC flowing between two "grounds" then I suspect there must be some connection that is not shown on the schematic.

S
Questions for common emitter, collector and base amplifier.

Finding the fault in the SMPS in our PC