Why do electrons and protons have the same amount of charge?

hope u can help, thanks.

Nobody knows why or how, though they can make mathematical statements based on the results.

However, if electrons and protons had different charges, then every atom would have a net charge ... and the large scale universe would be dominated by that net charge instead of gravity.
Blibbler

Very good questions and there's a Nobel for the first right answer!

There are some fundamental problems in attempting to answer, but here goes anyway.

2) An electron is a fundamental particle with no internal structure - it's not made of other stuff, it's just an electron.

3) The Standard Model of quantum theory has managed to unify QED (how charged particles interact with photons) with the theory of weak nuclear interactions. This is called Electroweak theory and it introduces the idea of isospin, which underpins electric charge.

4) QCD (how quarks and gluons behave) has not yet been unified with the Electromagnetic or Weak interactions successfully.

5) What is electric charge? I think of it as being a current. Let's throw orthodoxy out of the window for a moment and start talking about realism versus abstraction. What is electric charge really? You ask a professor and you will be told that it is what is described by the equations that were formulated by people a lot smarter than mere mortals, that these equations give the right answer, so just shut up and calculate the answer if you want to know how these particles are going to interact.

6) BUT.....behind closed doors you will hear talk of vortex-like topological disturbances in the various fields, as if these fields have properties of quantum superfluids which quantise angular momentum (which hints at why the charges on quarks add up to exactly the size of the charge of an electron - so will the electron eventually be shown to have a property of *threeness*?) and allow current-like flow of energy in persistent configurations. So you could think of an electron as being a little dot of electric current - the current is coming out of the electric field and is a vortex core, like an eye of a storm, which induces a loop vortex of magnetic flux (its "spin") around it. The current and its spin are mutually dependent and can't be thought of as separate phenomena.

7) So, the uncomfortable idea here is that charge is *like* some kind of motion associated with vorticity in a superfluid - but don't start thinking about an ether!!! As there are different types of stable vortex (look it up) structures in fluids and superfluids, so in the various different degrees of freedom of the quantum fields there are also various stable and unstable configurations and combinations of structures which we call particles and these can combine, rearrange each other and themselves by interacting in various ways. Go ahead and look up spherical harmonics (and for n-spheres), if only to see some pretty patterns.
Last edited: Jul 9, 2014
rigetFrog

Maybe there's some Hamiltonian whose ground state is the minimum charge we see in electrons and protons? Though the fractional quantum hall effect does allow for smaller units of charge...... Ok, I'm confused too.
Filby

Maybe there's some Hamiltonian whose ground state is the minimum charge we see in electrons and protons? Though the fractional quantum hall effect does allow for smaller units of charge...... Ok, I'm confused too.

thanks for responding but perhaps i should have mentioned I am not a physics graduate
so i need an explanation in layman's terms although i appreciate that translating concepts
in particle physics into everyday language is often difficult/impossible .
rigetFrog

quantization of energy levels, stuff that's learned in physics undergrad, arises from boundary conditions on the schrodinger equation. This equation is a second order partial differential equation that, in some cases, has nice closed form solutions.

I was thinking that perhaps charge quantization (area of my ignorance) may have a similar origin to energy level quantization (well known behavior).
haael

In Kaluza-Klein theory (and in string theories) there is a compact fifth dimension. Electric charge is just the fifth component of the momentum vector. Compactness of the fifth dimension automatically gives us charge quantization. So we might easily conclude that the electron charge is just the smallest possible nonzero charge and the proton also must have that charge (or its multiple) despite its mass is different.

However things get complicated when we consider the fractional charges of quarks.

One may restate the above claim but with the down quark as the particle with the smallest charge. It would mean that the size of the fifth dimension naturally yields the charge of 1/3 e and electron has triple that charge by accident.

That said I want to stress here that fractional charges of quarks are not really proven! There is an alternative early theory that quarks have integer electric charge. The experiments really don't show which one is better.

Staying with fractional quark charges we must also note that the 1/3 factor is connected to the electroweak mixing angle (of measured value very close 30 degrees, that means 1/3 of 90 degrees). 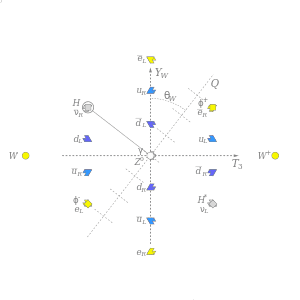 If the mixing angle were different, this picture would not be so pretty. So maybe the fractional charges of quarks come from the electroweak mixing angle.
rigetFrog

Can't say I really follow what's been said so far (thanks for trying) but I was just wondering, has anyone ever postulated a charge equivalent of the Higgs particle or are you all satisfied that charge is intimately linked with quarks and electrons without any need for an external field. Also is it theoretically possible to remove the charge on an electron? Ahhh !! this is getting out of hand , i won't understand the answers anyway :-(
rigetFrog

@Filby: Start reading up from wherever you need to start and post here when you get stuck. If you send me a personal message, I'll make sure to answer it
Filby

rigetFrog said:
@Filby: Start reading up from wherever you need to start and post here when you get stuck. If you send me a personal message, I'll make sure to answer it

thanks for that. i appreciate that u can only really get to grips with the sub-atomic world by understanding the mathematics which describe particles and forces but it is still interesting to know which phenomena are well understood by science and which are not.

please don't let my ignorance stem the flow of responses, they are still interesting to read.
Share:
Share

Related Threads on Why do electrons and protons have the same amount of charge?

Why don't electrons in the same orbital repel

A
Determine whether the charges on an electron and a proton are exactly equal?

B
Electrons and protons

G
I Are the positive charges from a hole and a proton ?

H
Protons Neutrons and Electrons in a neutron star

I Fermi-Liquid - amount of electrons available for the interaction

How protons electrons and neutrons relate to an atom's characteristics