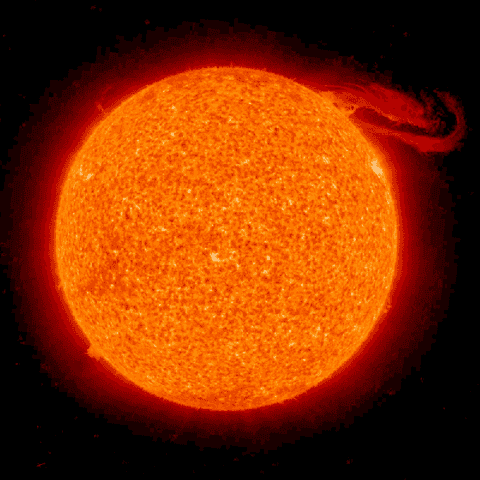 Students of physics learn some interesting facts about the sun, spread over different lessons and different classes. When learning about orbital mechanics, students are taught that the gravitational field of the sun exerts a long-range force proportional to its mass and causes planets to orbit in an elliptical path around it. When encountering “modern physics” for the first time, students are taught the sun in its interior is “converting mass to energy,” maintaining its temperature and pressure by fusion of hydrogen into helium and producing energy that is eventually radiated from its surface and eventually felt by us on the Earth. An astute student may ask if the sun is decreasing in mass to produce and radiate energy, is its gravitational influence on the planets getting weaker? For many years this has been handwaved away as a negligibly small effect, but now a probe orbiting the planet Mercury has made the first measurements of the sun’s loss of mass.

Before we discuss this recent finding, let’s estimate what kind of effect this would have. The sun’s luminosity is on the order of ##10^{26}## Watts. If we apply Einstein’s relation and divide this by ##c^2## this luminosity is consistent with a rate of mass loss of a million tons per second, which through energy conservation can be thought of as the rate that “mass is converted to energy” by fusion. For context, this is a reduction of about twice the mass of the largest ship ever built every second. The fusion-radiation process is not the only way that the sun loses mass; there is also the protonic outflux that forms the solar wind, as well as more coherent losses such as coronal mass ejections. The sun, however, is very big, and this is a few parts per quadrillion per year. From Kepler’s laws we know that with a given axis, the orbital period is proportional to the reciprocal square-root off the central mass, and even after billions of years we would not expect a noticeable difference in the orbit. Measuring something at the parts per trillion scale is extremely difficult, so it would have been a safe bet to assume that the gravitational effect of the sun’s shrinkage would never be observed. 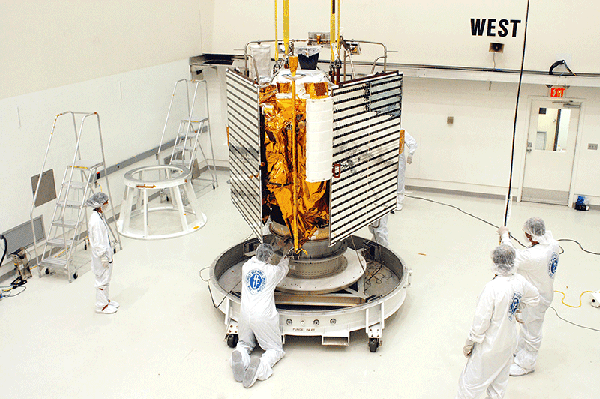 The MESSENGER probe, prior to launch.

Mercury is a well-known participant in the sun’s gravitational antics. Its over-eager perihelion precession of an extra 43 arc-seconds per century was a mystery at the end of the nineteenth century and was famously figured out by Einstein with the general theory of relativity. From 2011 to 2015, Mercury had a visitor from Earth, an orbiting probe called “Mercury Surface, Space Environment, Geochemistry, and Ranging” which totally randomly and coincidentally spells out MESSENGER. Its goal was to make measurements of Mercury’s surface topography and gravitational field to determine its internal structure. During that time, it gave us some stunning images of our smaller sibling.

A number of papers were published by the MESSENGER collaboration about, as I mentioned, Mercury’s surface and interior, e.g. here and here and here. The probe was deliberately crashed into the surface of the planet on April 30, 2015, but unfortunately did so on the side that was not facing Earth, so we couldn’t watch. Since then, the various members of the collaboration have been busy analyzing all the data and learning the most they can. In their recent paper in Nature Communications (Nature’s journal for freely-readable papers), they used seven years of data to measure various parameters related to general relativity and its potential violations. This was done by carefully tracking the position of the probe with respect to Mercury, to see how well its orbit corresponded to what we know about gravity. 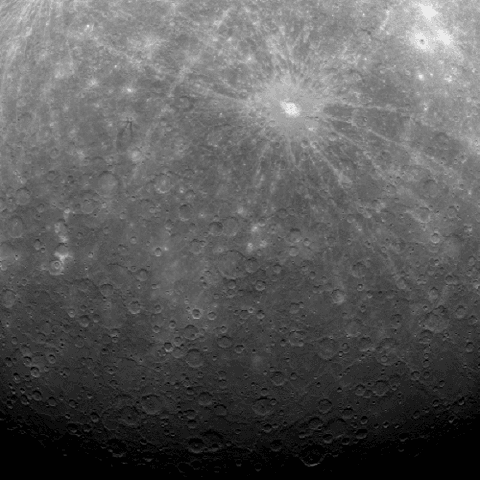 The first image of Mercury taken from orbit.

One of these violations is the Nordtvedt effect, which would exist if gravity gravitated differently from mass (meaning, if the contribution to the mass of a body due to its gravitational binding energy coupled differently to an external gravitational field). This would violate the equivalence principle, and objects would orbit differently depending on their internal composition. If this were real but small enough to have eluded previous measurements, it would have lead to a discrepancy in the relative position of Earth and Mercury by about three meters. MESSENGER data showed that the strength of this effect is consistent with zero, constraining it to less than one part in ten-thousand. While we already knew it was consistent with zero by tracking the distance to the moon (using the reflectors left there by Apollo astronauts), now we know it’s consistent with to zero with like three times the precision.

The most interesting result in the paper, in my opinion, was the measured decrease in the sun’s gravitational parameter. As readers may be aware, the equations of orbital mechanics all have the product of the mass and Newton’s gravitational constant, together with GM. Each parameter cannot be separately analyzed by examining orbits. This is why Cavendish measured the deflection of a pendulum between giant lead spheres to separately measure G and Earth’s mass in 1798. By very precisely tracking the distance to MESSENGER from Earth, the collaboration was able to measure the change in the Earth-Mercury distance over the several years of observation. This amounted to about two meters, and this was the first nonzero measurement of the changing gravitational parameter of the sun (keeping in mind the distance between them is at least 77,000,000,000 meters). They found that the sun’s gravity was getting proportionally weaker by ##6.13 \pm 1.47 \times 10^{-14}## per year (61 parts per quadrillion), and thus the solar system is slowly expanding as well.

There are two potential causes for this decreasing gravity: the M of GM is changing and the mass of the sun is decreasing as it fuses, radiates, and spews, or the G of GM is changing and the whole universe’s gravity is getting weaker. To separate these two, we can consider how the measured value compares to our expectations. Solar physicists can make a more precise estimate than my “luminosity over c-squared” calculation, and the expected mass-loss rate due to fusion is about 68 parts per quadrillion per year, and the mass loss due to the solar wind was estimated at 10 parts per quadrillion per year (this was harder to pin down due to the fact that the observation window didn’t span a full sunspot cycle). Together, the predicted mass-loss rate is consistent with the measured decreasing gravitational parameter given its uncertainty.

The curious skeptic might ask how we know that the laws of physics are unchanging over time. To answer that, we can examine what the effect would be if they varied over time, and go look for those effects. One possibility is that the strength of gravity changes over time, and looking for a time-varying Newton’s constant would verify or constrain that. Given our confidence in the physics of the sun and the measurements from MESSENGER, they were able to use the data to constrain this to below 40 parts per quadrillion per year and consistent with zero. There have been previous attempts to look for a changing gravitational constant, also consistent with zero, but less constraining. Before this study, the best estimate was based on long-term observation of binary neutron stars, constraining it to about 600 parts per quadrillion per year. So, we still have no evidence that gravity is changing (my intuition says it isn’t), and now we know that if it is, it decreases proportionally like 400 times slower than the universe is expanding.

So, now we have empirical evidence that the sun is decreasing in mass (even though it is very slowly increasing in volume as well), and that it leads to a change in the orbital axis of Mercury consistent with a few meters over a few years.

Why Is Acceleration Due to Gravity a Constant?

Slowly Lowering an Object in a Static, Spherically Symmetric Spacetime

Struggles with the Continuum – Relativity and Quantum
36 replies